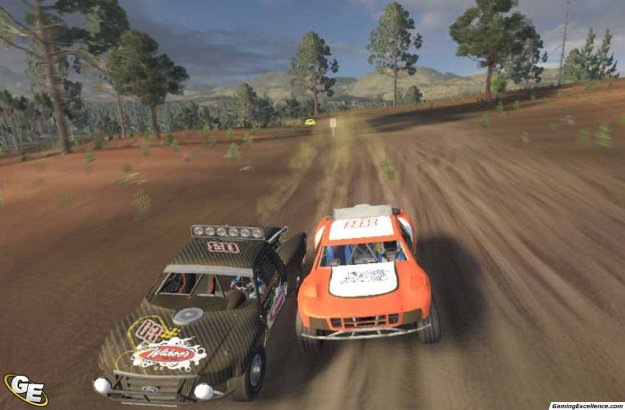 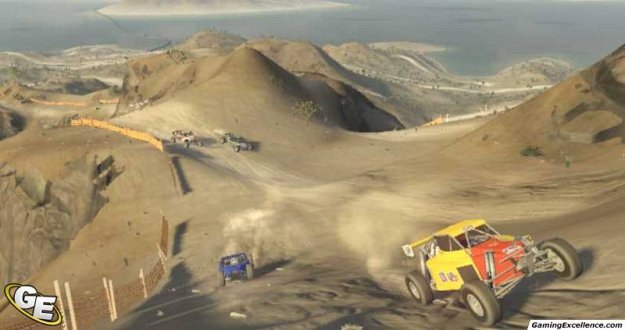 Off-road racing has been a staple in the video game world for years now, and thanks to the recent success of MotorStorm on the PlayStation 3, the trend will more than likely continue. Enter Baja: Edge of Control, an off-road racer developed by 2XL Games, aptly named after the real life race, the Baja 1000. Real life seems to be the name of the game in Baja, as the game takes a more simulated look at the genre, attempting to be as realistic as possible. Although the developers may have succeeded in doing this, it seems they have made a game that only the most hardcore of off-road racer fans will enjoy.

Your career in Baja starts off at the bottom of the totem pole: the Baja Bug Class. Here, you're driving Volkswagon bugs that are specifically tuned for the desert. Eventually you will work your way up the vehicle class chain and will be driving state-of-the-art trophy trucks, however it will take some time. Ok, it will take a lot of time. You get to move onto the next vehicle class by, of course, winning races. Sounds easy, right? Well it's harder than it sounds. So hard, in fact, that gamers who were looking to pick up a fun, quick racer won't want to play anymore.

The game is difficult, there is no question about it. Even on the easy difficulty, the computer can kick your butt if you're driving isn't near perfect. The mix of realistic physics and aggressive AI are mostly to blame, however, that is what is to be expected in a racer trying to resemble reality. Once you get out of the beginning vehicle class, the learning curve starts to straighten out, however getting to that point proves to be tedious and excessively challenging. Even then, however, your vehicle can wreck by hitting the smallest bump at the wrong angle, or by flipping on a corner thanks to a seemingly random encounter of excessively floaty physics.

Another annoying occurrence in Baja is having your vehicle reset for being off of the track. I understand that this isn't Mario Kart, and you're not supposed to try and find hidden shortcuts, however on some corners your vehicle can get reset even if you are just a few feet off of the track. This is especially frustrating on the final lap of a long race, after you've turned the same corner the exact same way several times, then the last time you're penalized for it. The AI will also try and push you off the track occasionally, and if they hit you too far, you'll be reset while they continue driving on.

Baja has a couple of different race types to try and keep things fresh, including the classic circuit, the never ending Baja, and probably the most entertaining, the hill climb, which has you, as you probably guessed, climbing a hill. When you're not tearing up the old dusty trail, you can soup up your vehicle in a number of ways, whether it be fiddling with your engine, or adjusting your shocks. If you really know your stuff, you'll actually enjoy tinkering and tampering with your ride to your specifications. If your not up to date on your Baja parts list, it's not a big deal, as you can just get the parts which give your vehicle the biggest upgrade. Although these customizations don't have huge, game altering effects, it is nice to have a little break from the racing, especially if you are losing… a lot.

For obvious reasons, Baja is more fun playing against friends. Baja: Edge of Control offers 10 player online races, and although the core racing remains the same, you're at least playing against opponents that have to adhere to the same rules you do. There is also virtually no lag online, which if Xbox Live racing is where you get your kicks, you'll certainly get some enjoyment out of it. More interesting than the online multiplier, however, is the return of good old fashioned offline split screen multiplayer. For years now, games have been criticized for not having online components. So much, it seems, that some games' multiplayer have become exclusively online (like the original MotorStorm, which didn't feature any offline splitscreen). Baja takes it back a step, however, and lets you play on the same TV with three buddies, something that is becoming less and less heard of in this internet age, but is a more than welcome addition.

There is a huge variety of courses in Baja, and although some of them look the exact same, there is a lot of variety to choose from. The graphics in Baja are never really jaw dropping, and you never get the same sense of speed you do in other racers, but the impressive draw distance helps push the realistic factor of the game, and the framerate always stays smooth during a race. Vehicles also break apart realistically, which could be either a positive or a negative depending on how you look at it (I'm more partial to the spectacular explosions of MotorStorm, myself). Some of these damages are merely cosmetic, as body panels that fall off won't really hurt your driving (and it certainly doesn't help it). Something like a flat tire, however, will really hurt your chances of getting the gold, making a quick pit stop crucial.

The audio is also rather lackluster. The sound effects of the engines and whatnot are rather satisfying, but the game's soundtrack is quite forgettable. Turning down the music volume, cranking the sound effect volume, and playing your own music makes the game much more enjoyable. Luckily, there is no annoying commentator to speak of, something that has been plaguing racers as of late.
For fans that watch the Baja 1000 every year, there is quite a bit of depth to be found here. The dozens of courses and customizable vehicles will keep you busy for quite some time, and with the offline split-screen, you and your Baja buddies can all race against each other. To those gamers who are still unsure of what a Baja is, or who are looking for a fun arcade racer in the desert, this isn't the game for you. The harsh difficulty level and simulated driving makes for a frustrating experience if you're not in it for the long haul. The graphics and audio fail to impress, leaving you with a mediocre simulation racer that is hard to recommend to all but the most hardcore of off-road racer fans.