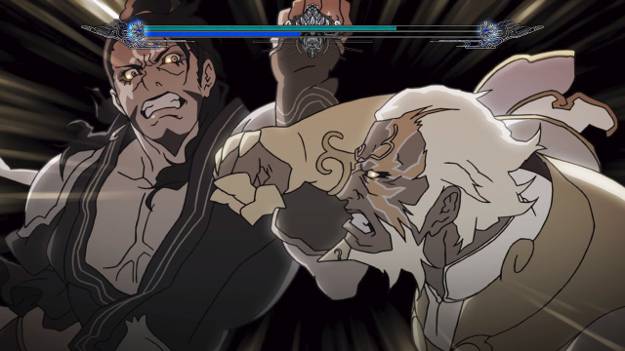 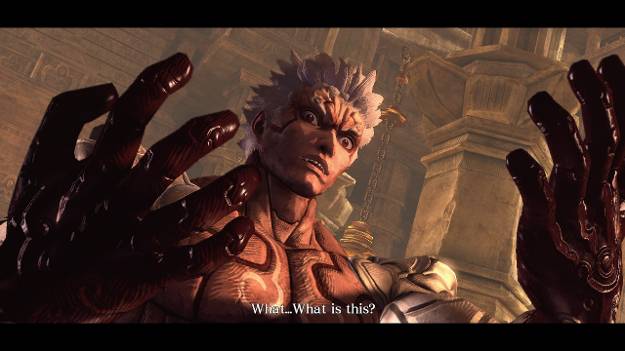 So here's what happens when gods fight: it's not a matter of destroying buildings, or even just fighting super strong monsters. When gods fight, it's a matter of kilometres, of mountain-sized mayhem and destruction on a near-global scale. Explosions that decimate continents and swords that stretch into the atmosphere. And that's what Asura's Wrath does right. What it does wrong is another ballgame.

The game is crazy and over-the-top, that much is certain. In the very first episode (of eighteen) of the game, you launch from your space fleet of the gods, shoot down hundreds of 'impure' creatures known as gohma, and subdue a creature roughly half the size of the planet that has burst from the core. Later, in a quest for revenge, you take on an enemy twice the size of Earth, lose your arms, and fight a god with only headbutts and your legs before dying. Again. This is the first third of the game. Things get crazier.

Asura excels in its presentation. With some good art, a fairly engaging story, and a format that is more akin to an anime that a video game (there are episode teasers, commercial bumpers, and more), and the quick-time events used in the game do a good job of conveying what action is going on. Well, as well as a QTE can, anyway.

Unfortunately, what Asura does wrong is everything related to the fact that it is, in fact, a videogame. First, those QTEs? They take up the majority of gameplay. Given fifteen minutes of playing the game, expect to actually have direct control of your character for maybe a third of that, if you're lucky. Sometimes you may get a single fight in an entire episode of the game. Most of the QTEs don't even have to be completed, either; whether or not you perform them only affects your score at the end of the episode and little else.

The combat itself isn't anything special, either. It's you basic pastiche of various brawlers throughout the years, albeit certainly more mobile and active than your typical God of War-like title. Aside from an 'Unlimited' bar which allows you to perform heavy attacks without tiring, you've got something called a Burst meter which goes up as you do damage. Oddly enough, most battles are not ended by defeating all the enemies, but by raising this bar to the max, performing a QTE, and finishing the fight in a cutscene. There are also a number of on-rails shooter segments which feel oddly out-of-place in a game like this, and just as repetitive.

And if you're expecting any sort of exploration, experience/leveling mechanics, or anything that isn't combat or quick-time events, be prepared to be disappointed. The only thing you can do that isn't following the core plotline is try to get better scores in the episodes in order to unlock 'gauges', selectable from the main menu, that give you better defense, a longer Unlimited mode, and other effects by replacing your default health bar.

See, here's the thing: Asura's Wrath is a game that's meant to be experienced, not played. If you watch it as a third-party, it's fairly enjoyable. Over-the-top cutscenes, crazy combat, and a story involving a mish-mash of various Asian mythologies (and some sci-fi elements too), it's certainly an interesting title to see. But it isn't fun to play, and that's the core problem here. As an experience, it does well. As a game, it does not.