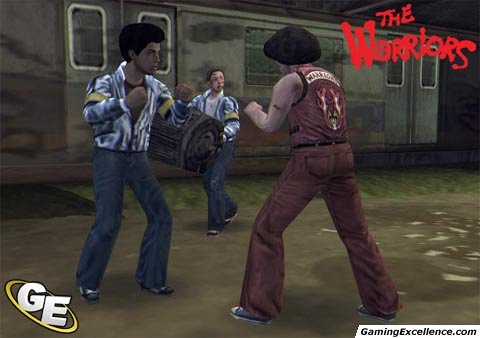 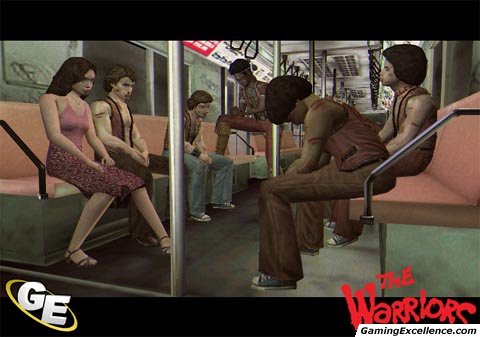 In The Warriors, a tale loosely based off of a Greek story of a group of Spartans trapped behind enemy lines, eight gang members must make their way back to their turf, Coney Island. They've been falsely accused of killing the leader of the largest gang in New York, and every thug in the city wants a piece of them.

Rockstar has attempted to bring this movie onto the consoles with surprisingly good results. What results is a brawl-em-up title that does a lot to separate itself from a lot of the other repetitive fighting games out there. No longer will you be running through generic streets, tapping the same button over and over again. Rockstar has done a lot to bring solid controls, artistic visuals, and a narrative that gives a lot of life to the characters and the pseudo-dystopic New York that they live in.

The game takes place roughly three months before Cyrus gets shot and the Warriors make their fateful trip across the city. This allows the player to experience the rich setting and gameplay in a way that is less rigidly-tied to the plot of the movie. Fans of the movie will get a kick out of being able to see their favourite characters in new situations and battles. Even gangs that got little screen time in the movie, such as the Boppers or the Punks, play larger roles in the game, giving more life to each of them. In fact, it's only in the last couple of missions that you actually experience the plot of the movie, so there's a lot of new content to see.

And Rockstar did well to make this content actually enjoyable. The game perfectly replicates the chaos and carnage that is in a rumble, and by giving the player a wide variety of attacks and moves, prevents it from getting repetitious. They make it simple by giving you a strong attack, a weak attack, and a grapple/hold attack, but the ability to string them together in any order you want is what makes it so much fun. You can throw a couple weak punches and finish up with a powerful final blow, or you can just tackle them to the ground and start letting your fists pound their face.

In addition to the basic moves you can pick up a slew of other weapons (no guns, mind you) to wield against your opponents. Anything from baseball bats, sledgehammers, or even beer bottles can be used to take out your opponents, and add another level of depth. If you start swinging a bat wildly, you're likely going to hit your own members in the face. There's also another element in the game called 'rage.' If you deal enough damage to your opponents, a meter will slowly build up until you hit your rage point. You start dealing greater damage, become resistant to damage, and can deal extremely powerful attacks that floor everyone around you. These can become lifesavers when you're surrounded by opponents that want to see you taken down.

The production levels of the game are impressive. For one, special attention's been paid to the environments that you'll be brawling your way through, even down to the authentic graffiti and settings from the movie. Additionally, the voice-overs are top-notch, and even some of the actors from the movie were brought in to provide voices for their characters, and even the ones that aren't from the movie do a pretty good job, with just one or two exceptions. Even the music of the game is straight from the movie and the era. The game in general looks great...except for the graphics.

It's unfortunate that the game looks so dated. It really does, and it's a shame, because it plays like something better. The characters have likenesses that look like their movie counterparts, but aside from that, everything looks pretty muddy and dated. Really dated. Luckily, however, once you realize that this is because the game can display close to two dozen characters on-screen at once without any slowdown, the graphics don't seem so bad anymore. Besides, the rest of the game is good enough that the graphics will soon be a mere pittance after some time.

There's a lot of hours packed into the game, many more than I expected. Since the game isn't just about the movie, there are a slew of missions that you'll undertake in order to increase the rep and turf of the Warriors. The good thing is that the missions can be a challenge, and the AI does a good job of giving you a run for your money. For each of the missions, there are main objectives that you need to complete to progress, but to add replay, there's also some optional objectives that'll have you running around the area looking for graffiti to tag or certain bad guys to wreck.

At the end of each mission you'll be brought to the headquarters of the Warriors, which will allow you to take stock of the situation, play the 'Rumble Mode' for a quick fix to your brawling urges, go out into Coney Island to complete optional objectives for in-game bonuses, or even do some flashback missions. These will give you an opportunity to see the origins of the Warriors and its more important members. And, if you so feel like it, you can go back and replay any mission you've already completed, whether its to get a better score, complete all the bonus objectives, or just beat some suckers up. With all of these missions and unlockables, you'll be putting in a lot of time into The Warriors.

There's also a lot to do in the missions themselves, too. Between beating your knuckles into another gang, you'll be stealing radios, mugging innocent civilians, putting your gang mark up, and generally running around causing chaos. You need the cash to buy weapons, spray paint, and flash (a drug that'll recover your health in one dose.) This means that in each level you'll be doing anything from hunting down a specific member at a high-profile club to running around during a riot, grabbing as much loot as possible. Oh, and watch out for the cops. They'll take you down, and they're trained.

The multiplayer aspect of the game also lets you and a player bop your way through New York. The good thing about it is that someone can pick up a controller and immediately begin playing, taking control of any nearby Warrior. If you get too far from each other, you enter split-screen mode, reverting to single-screen should you get into the vicinity of each other. You can play the whole story-mode with a friend, or you can get into Rumble Mode, which allows you to bop your way through mini-rumbles with their own objectives and gameplay, whether it's a graffiti race, king of the hill, or even wheelchair racing, the games are just as frantic and chaotic as the single-player mode, and just as fun.

In the end, The Warriors is a very enjoyable game. There's such a large amount of gameplay, style, and chaos pumped into the single game that you'll be brawling your way through many, many hours of enjoyment. Just remember that this is not a game for the weak of heart, or the kids. Keep bopping, brothers.