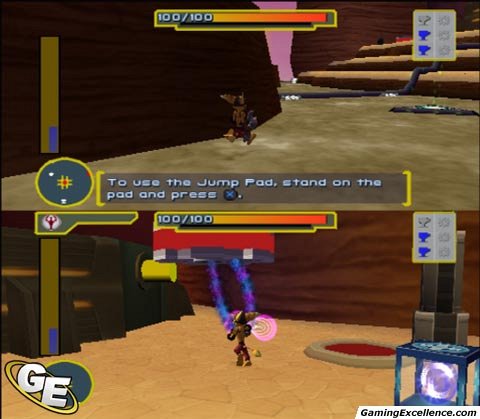 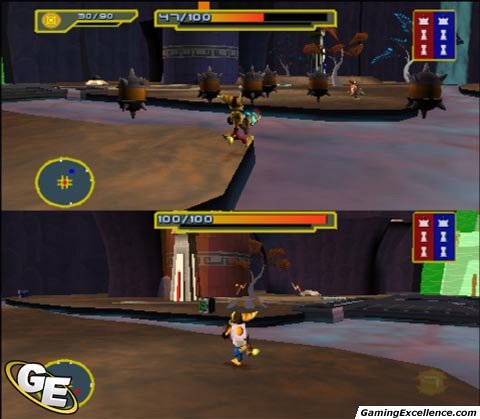 Ratchet & Clank: Size Matters was a handheld-sized entry into the popular duo's adventure, released on to the PSP about a year ago. It was well met and bringing the duo to a handheld went pretty well, save for a couple minor issues. Now the game's been ported onto the PS2, unfortunately it doesn't fare the transition well.

The story begins, as in many of these adventures, with our heroes relaxing quietly on the beach. Then they have a peaceful vacation and that's it. The end.

What? Oh, okay, okay, you got me. Something screws it all up and, between saving little damsels in distress and discovering lost mini-civilizations, Ratchet and his robot buddy are up to their necks—well, ankles—in trouble. The writing is as funny as before, although there doesn't seem to be a whole lot of it, unfortunately.

Those who have played any other Ratchet & Clank titles know that the main draws of the series are the guns, the shooting of the guns, and the upgrading of the guns. Did I mention that there are guns? Size Matters keeps this tradition going, but not without some serious flaws. First, the guns just seem poorly done. While some are decently useful, most feel like pea-shooters and others fail to do any damage at all.

The rocket launcher, one of the most powerful weapons in the game, still takes a number of shots just to take down a simple enemy. The lacerators, rapid-fire pistols, can deplete nearly half the ammo storage before killing some enemies. And that's when they're fully upgraded! My theory in this regard is that, due to the PSP's limitations, there's a lot less enemies on screen than on other platforms. To compensate, they take a lot more hits to take down. This feeling of the game being hamstrung by its PSP origins permeates a lot of elements in Size Matters, and is one of its most significant problems.

Another big issue I have with the weaponry is the lack of upgrades. The allure of the weaponry is not just the explosions, the effects, and the widespread chaos (I know, hard to believe there's more). What makes the guns so attractive is the thought that they get more power as you use them, upgrading in levels and destructive power as you go. Size Matters does let you upgrade your weapons; it just doesn't feel like you can upgrade them enough.

As I mentioned above, many feel like pea-shooters rather than handheld destruction. This is amplified by the fact that there are only four levels of upgrade to each weapon. Granted, you can raise the weaponry four more levels after beating the game, but considering previous titles have had weapon upgrades go up to level 99, eight levels in total just seems a little weak.

There's a variety of gameplay present: there's the standard run-and-gunning, rail grinding, even flying around as Giant Clank. Not all of it is fun. There're so many modes of play, especially in the arena challenge modes, that many of them feel shoehorned and half-complete. Probably the worst of these is the hover-boarding races. They might've been enjoyable if the controls were better, the races conveyed a sense of speed, and the collision detection wasn't so awful. The challenge-based gameplay was better suited for the on-the-go platform of the PSP, but it feels flat and repetitive on the PS2.

Speaking of feeling flat, the graphics don't translate well to the console. Regardless of whether or not they've been upgraded, they don't look good. Weapon effects pale in comparison to what's been done before, textures are dull, and models look simplistic. Camera controls suffer the same fate, making it hard and sometimes impossible to actually see what you're shooting at. On occasion, camera control disappears completely and it's frustrating as hell when this happens.

The audio is worth noting as well: the sound just isn't as good as previous titles. In addition to this, the sound will sometimes completely cut out, notably after cutscenes. The dramatic element of cut scenes never fails as spectacularly as when there's absolutely no music to them at all. You'd think that being chased by an airplane through a cornfield, avoiding machine gun fire as you strafe back and forth, would be dramatic. You'd think so. Without music, it isn't.

Size Matters is a great portable game. As far as Ratchet & Clank gameplay goes, the game hits the nail on the head. Unfortunately, there are limitations present on the PSP that make other Ratchet & Clank games on the PS2 more enjoyable, so portability was previously a deciding factor. This version is not bound by those limitations, so often one wonders why they're playing it instead of a previous, superior game in the series. If you've played this on the PSP, there's no reason at all to pick it up on the PS2. Even if you haven't played it before, it's hard to recommend. This is where I'd usually recommend the game to only the diehard fans of the series. In the end though, it's really the fans that'll be the most disappointed.