Over the Hedge (PS2) 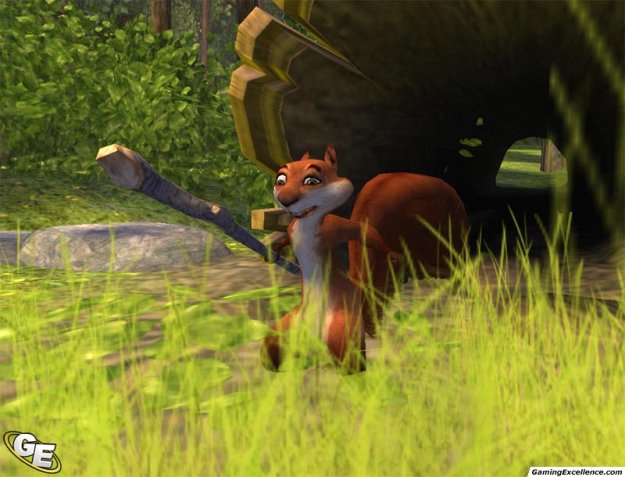 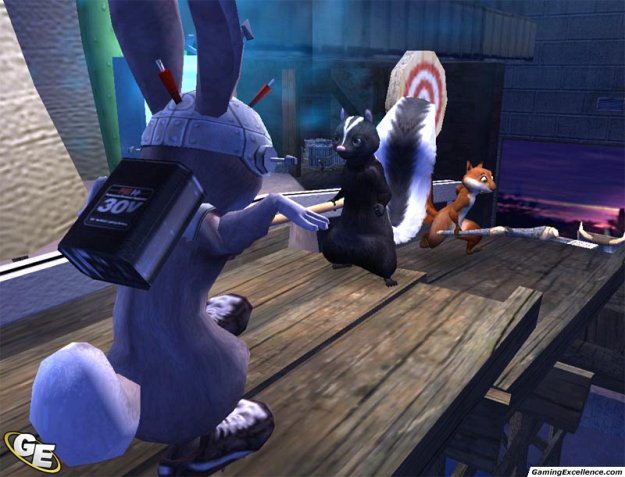 Perhaps it is destiny for every animated movie to have a video game counterpart, and Over the Hedge is no different. In this video game based on the movie, based on the comic strip, the woodland creatures go through wacky hijinx to steal food, loot, and cause a bit of mayhem in suburban life.

In Over the Hedge, you take the role RJ, Verne, Stella, and Hammy as you navigate various areas to get to your goal. Along the way, you'll be beating up various creatures and traps under the control of the Exterminator, such as rats, moles, and karate rabbits, deadly barbeques, and killer potted plants as they try to stop you. At any given moment, there will be two characters on screen; one of them is controlled by you, the other by the game AI (or another player, more on that later,) and you'll be equipped with everything from hockey sticks to golf clubs, rolling pins, wrenches, and more as you knock your enemies into submission.

There's not a terrible amount of variety in the game, though that's not really unexpected. You got through a level, smashing objects and creatures, completing fairly simple objectives that involve reaching a particular point or switching something on/off. Nothing too complicated, but it's actually not as repetitive as I first imagined. As you progress, new challenges get introduced to you so that you're not doing the same thing over and over again, and things are changed enough that you don't feel bored too quickly.

The controls, like the gameplay, are fairly simple, but with enough variation to keep you from feeling bored too quickly. You can swing your weapon and jump, but you can also perform a special attack that involves pounding the ground, charge up for a spinning move, jump on your partner's back for two-person fighting, as well as use a ranged attack that can hit those hard-to-reach targets. You can also find a bunch of toy guns scattered around the area that can dispatch the bad guys quick and easy.

The game is a lot longer than I expected it to be, though that's not really saying much. There are over thirty levels to smash your way through, and they have some length to them, especially when you factor in cutscenes. For each level, there are normal objectives, but if you want, you can also complete bonus objectives that unlock prizes like movies, mini games, and even strips of the original comics. This, combined with the ability to replay past levels, gives the game an element of replay value that might entice some to unlock everything.

Present in the game is the humor from the movie, whether it's the confident wisecracks of RJ, the worried comments by Verne, or the hyperactive energy of Hammy, they've translated well to the console. What's a shame is that the original voices from the movie are nowhere to be seen in the game. The replacements do a decent job for the most part, however, and they don't detract from the game. Although one could argue that you hear the impromptu mid-battle comments of you and your partner a little too often.

Since you control one animal, the computer controls the other, with pretty good results. It'll avoid traps, attack enemies, and in general be useful, though it does get stuck on rare occasions. What's fun is that at any point during the game, a second player can jump in and take over for the second character, allowing you to kick some rodent butt, multiplayer-style. For some reason though, when this happened a couple bugs here or there presented themselves, like items getting stuck in walls, the inability to switch weapons, or falling down a pit repeatedly because the character won't spawn on solid terrain.

Over the Hedge isn't difficult (I have yet to lose all my health), but it's a decently-made game that doesn't just feel like a cheap, quick movie tie-in. It'll likely be a fairly enjoyable experience for the younger audience, especially if they enjoyed the movie.