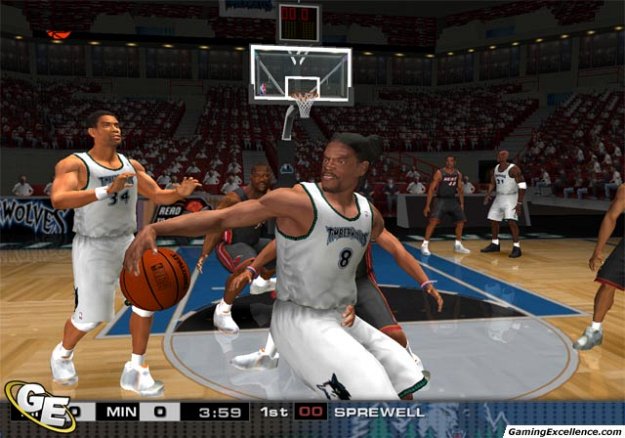 The game of basketball is a relatively simple one. You have two sides (be it five on five or one on one), a ball-like object, and an elevated hoop-like object. The goal of the game is simple; somehow put the ball into the hoop more times than your opponent. This simple game, which started out using wicker baskets, has developed into a multi-billion dollar industry. As with wealthy industries come endorsements. One of these endorsements that is becoming more and more present, are those via video games.

This is where NBA 06 featuring "The Life" Volume 1 comes into play. Made by Sony's sports game studio, this is a game that technically, (since they didn't release a game last year) is two years in the making. With that said, while the game does attempt to bring a new element to the basketball genre, at the end of the day, this new element only makes this game worthy of rental.

Before describing the gameplay, one point needs to be addressed. Regardless of which mode you play, there will be noticeably long loading times. While this may not be a huge deal when playing exhibition games, once you venture into "The Life", you will quickly become tired at the frequency of load times.

The game mechanics are, for the most part, fairly decent; however it takes some time to become functional with the controls. What should be noted as a positive for this game is its shooting mechanism. Essentially, when you are taking a shot (by pressing the circle), a circular meter appears over the head of the player in question. As you hold the circle button, the meter begins to build up. If you release the button at the right time, the meter will show green; this indicates that the chances of the shot making it are very good. If the color is yellow, then the chances of making said shot are average. Finally, if the color is in the red, then the chances of making said shot are low. This occurs any time you press the circle button as it is the designated "field goal" button. If all you care about is dunking, then that is the square button. While there is no meter that determines the odds of you making said dunk, you have to be relatively close to the basket for the auto-dunk mechanics to kick in. Otherwise, you'll attempt to "take it to the hole" but since you are so far away, you will be stopped by the defense, leaving you with the options to either pass or shoot.

While the pros to the game mechanics are predominantly offensive, the cons to the mechanics are mostly defensive. Simply put, in most cases the only real way you can "steal" the ball away from the opposition is if they mess up themselves, say by missing a shot. The problem is a combination of the computer knowing what it is doing, and the delayed response in the controls that the player cannot really control. This ends up becoming a bigger issue when you are trying to cover certain players and the game will not want to co-operate with you. This is a damper because one of the biggest attributes to the game of basketball is the fast break, which usually is started from a steal or a rebound. In terms of offense, one of the biggest issues revolves around the fact that randomly passes will go…very awkwardly, sometimes throwing the ball out of the court. While these things do happen in the real-life NBA, the fact that a player can miss a pass from maybe a foot away (in video game measurements) leaves one scratching their head. A second issue revolves around new "Showtime" game play, which mostly relates to "The Life" mode.

Overall, this game plays relatively fine as a pure offensive game, but tends to fall apart when it comes to playing the defense. Don't be surprised if the games are high scoring.

This game has the standard sports game options: Quick game, League, Online, Practice, Create a Player, and Mini games. However, this game has one main new option exclusive to this game.

The Life: Regardless on where you go in the game, be it exhibition, practice mode, or even the pause screen, the game establishes the fact that it is the first time that they have "The Life" option. Basically, this is a story mode that allows you to live the life of a rookie on your favourite team, rising from the ranks of court scrub to becoming all-star status (without the legal issues). You start off at a gym being pre-draft coached via small video clips which are voice acted. Usually after a video sequence describing the drill in question, you have to perform the drill to proceed with the story line. While the idea of this is neat, the execution of it makes it very frustrating. One of the big reasons revolves around the requirements of said drills. Regardless of which drill you do, you either pass or fail. The problem is that in order to pass, you have to fulfill all the requirements given. Early in the training you are put into a situation where you have to win a scrimmage. The thing is, you can't just win; you have to achieve about 4 other different requirements, on top of winning, to proceed. This leads to you having to redo said drill. Since, as mentioned above, the load times are long, this adds to the frustration. Another issue with this mode is the lack of options you have. The only person you can "live the life of" is that of a point-guard. You can't try to live the life of Yao Ming since he is not a point guard. This is a damper because not everyone actually wants to be point guards. Finally, a third issue with this mode revolves around the "Showtime" gameplay mechanics. Simply put, the idea is that by working as a team via performing certain passes (i.e. no look) and generating creative offence (i.e. alley-loop) you earn points, which boosts team momentum. This type of game play tries to promote team play and lessen individualism. While the idea is sound, the emphasis on it within the story mode, in combination with the nature of controls, leads to even more frustration. The funny thing is, even in the real life NBA (or sports in general), while they maybe team based, more often than not individual players are singled out.

For better or worse, there is no "TV" style commentary. There is, however, arena commentary. Basically, if you have ever been to a real-life NBA game, you will understand what I mean. If not, imagine a stadium announcer making general comments on certain plays. It may not sound great on paper, but in execution, it helps to enhance the "real-life" NBA experience. Also, while the teams are playing the shot clock, you sometimes hear music playing low with a stadium echo. As stated before, if you have been to a live NBA game, these things are to be expected.

The sound effects, from the crowd cheering to the sounds of passes and even players talking, are pretty good. The only issue is that they only have a stock of "phrases" players can say, so expect a lot of repetition. The music that plays in between quarters, during the game, and at the option screens is hip-hop. From the sounds of it, some well known artists, such as Talib Kweli, are featured. If you like hip-hop, then you should like the music; however you will hear it on repeat a lot.

Overall, the graphics in this game aren't the best, but they are certainly not the worst either. The thing is, due to the nature of basketball, the game is always moving, meaning you mostly only see the backs of players. The only times you really notice the detail put into the game revolves around star players. Allen Iverson, for example, sports his white armband while playing. However, the details outside of the game are not all that good. The fans for example all wear the same clothes and seem to be playing a game of "Simon Says" together. Also, the arena always seems to be very empty. I find it very hard to believe that the arena would not be sold out at a Los Angeles Lakers vs. Miami Heat game.

NBA 06 is a game that tries to promote its new "The Life" story mode first, and playing the standard season and pick up game modes second. This leads to an over emphasis on "The Life" mode even while trying to simply play an exhibition game.

While this release may not be at the top of it's game, it certainly isn't struggling either. Though NBA 06 has many things going for it, it also have many things going against it, including "The Life" mode, like many things that look good on paper, but in practice it doesn't flow so well. Drill's done. Hit the showers.