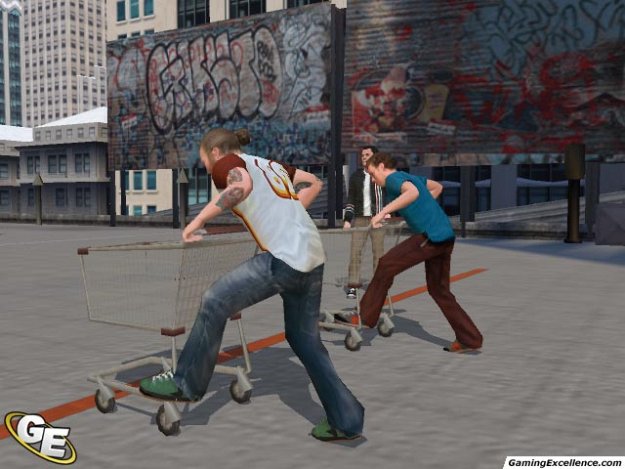 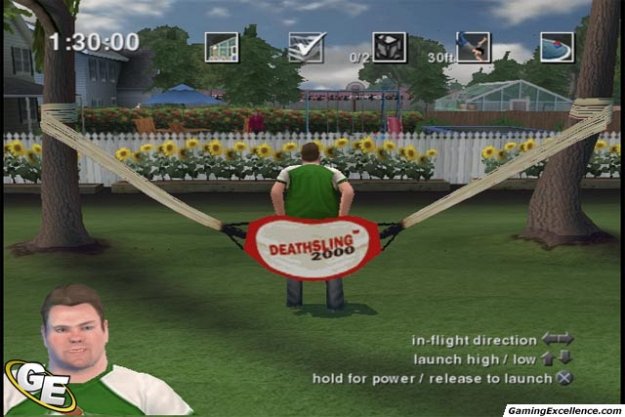 Long after the Jackass series was cancelled and well after the latest movie release, Jackass: The Game is published. The crew is incomplete and the games are mediocre and it has that beloved Jackass flavour of painful agony and disgust, but creating such a mediocre title in hopes of grabbing the lunch money of awestruck pre-teens worldwide because there is so little Jackass content and still so many Jackass fans, makes those fans wish the series was continued even more.

It's been well over five years since the show officially went off the air, and it's been infamous since. Jackass: The Game is simply a collection of ridiculous mini-games derived from the stunts seen in this show. The games will entertain those familiar with the show much more than those not, as a sense of nostalgia can come into play a lot. A lot of the games are simply too simple or to repetitive to be categorized as fun, whether you're a fan or not. The following are all guaranteed if you choose to expose yourself to the Jackass game experience: lots of shirtless men, mindless body-throwing, and more vomit, stupid sounding laugh tracks and the word "dude" than you'll know what to do with.

Although the majority of the CKY crew is nowhere to be found (Bam, Dico, Rake, and Raab are not around) with exception to Ryan Dunn, the grocery cart is still found aplenty. Johnny Knoxville is the feature name for the game with Bam out of the picture, and the Wildboyz Steve-O and Chris Pontius are backing him up. You'll also see Wee-Man, Dave England, Ehren McGhehey, the big baby Preston Lacy, and Jeff Tremaine (the director). Even without the entire cast lending their face and voice to this video game rendition, Jackass: The Game does capture the essence of the show.

Jackass: The Game places you as the director of the new Jackass season, shooting skits for each episode. Pass all the skits/mini-games to impress the fans with a sweet episode, thus staying renewed and moving on to another episode. Also like the show, the season is extremely short and only consists of seven episodes. Each episode includes five skits, and doing the math reveals that you'll most likely be done the game in a same night as purchasing it. The overall presentation looks much more impressive on the PSP as the character models and cutscenes aren't much different in quality compared to its PS2 counterpart.

A lot of the stunts don't seem to fit the actors performing them at times, as on the original show each Jackass had content they would typically produce. For example Knoxville used to do a lot of the higher budget stunts, Bam would piss off his parents and skate around, and Steve-O and Pontius would do a lot of animal stuff like swallowing goldfish and diving in elephant poop. The stunts within the game are much more over the top of course, such as playing rooftop bumper-carts, except replace bumper-carts with human size gerbil exercise balls. There are a few stripped almost directly from the show and/or movie and glorified a bit, such as the mini-golf demolition, the elephant poo dive (not off a ladder, off a skyscraper), and a rhythm game for Party Boy. All of the "Wee Games" are terribly boring, like smashing a car by repeatedly pressing 'X' before the time runs out.

Jackass: The Game has no learning curve, as the controls are simple and displayed on screen during play. If you're a completionist then you'll get a little extra out of the game with the added objectives for each skit. After you've gold starred all the skits, you can try out challenge mode. This mode basically takes all the stunts from the season and just gives you more difficult objectives. The whole idea is to save a bunch of replays of each skit and eventually tie them all together in "director mode" to make your own personal episode of Jackass. But in reality, most of your replays will be boring to watch when not playing along with them and the editor itself is quite restrictive and hard to use for the options it provides, so you'll probably just skip this mode altogether. Not to mention this mode is not available on the PS2 version. You can earn cash within the season to purchase boring bonus stuff like props, character models, voice over montages, and clips you've probably seen a million times from the show.

You can also play four-player local and two-player online with the PSP version of Jackass: The Game. The multiplayer options are limited, including round-robin and random round-robin selection, as well as the "ass-to-ass" mode that lets two players select a couple of stunts and then go head to head. Even with the PS2 multiplayer being neutered, it seems the PSP multiplayer was a feature that crept in somewhere along the development process, or at least it seems that way with it being limited in playability the way it is.

The visuals carry over quite nicely from the PS2 to the PSP, looking very much the same in most spots. The cutscenes are completely the same of course, and will quite possibly be the most entertaining part of the title as they are quite well done. The visuals don't ever seem repetitive but the voice clips, although decent, can and probably will get on your nerves. The soundtrack is much like the show, featuring lots of punk, rock, and combinations thereof. You'll hear some Balzac, CKY, Nashville Pussy, Misfits, Turbonegro, and a couple unreleased songs from Chris Pontius.

Jackass: The Game is the definition of mediocrity, but when you don't expect much this makes the title really impress you in some areas. The visuals, the audio, and much of the gameplay will actually keep a Jackass fan occupied and impressed. Now for how long that fan will stay occupied and impressed is completely variable. Personally this was entertaining for about one night (or two to three hours of play). This makes Jackass a perfect rental, especially if you're going for the PS2 version. The PSP version includes the director mode and the extra multiplayer and looks, sounds, and feels much the same as the PS2 version making it a better choice if you're looking to purchase it. In other words it's not a terrible game, it's just not a very good value. Either way you spin it, the game reeks with the awesome essence of Jackass.