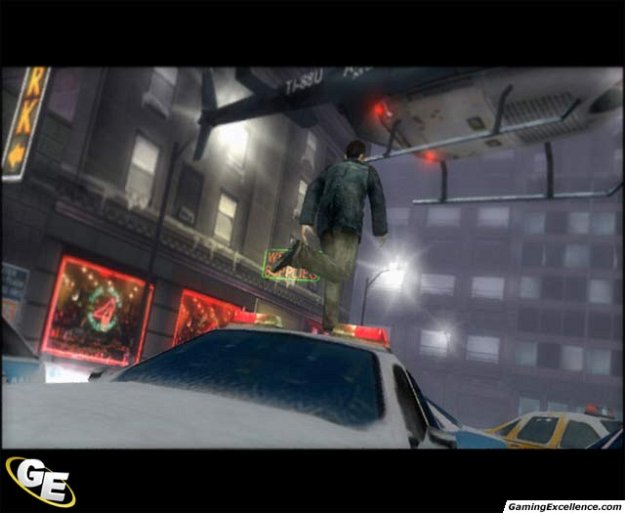 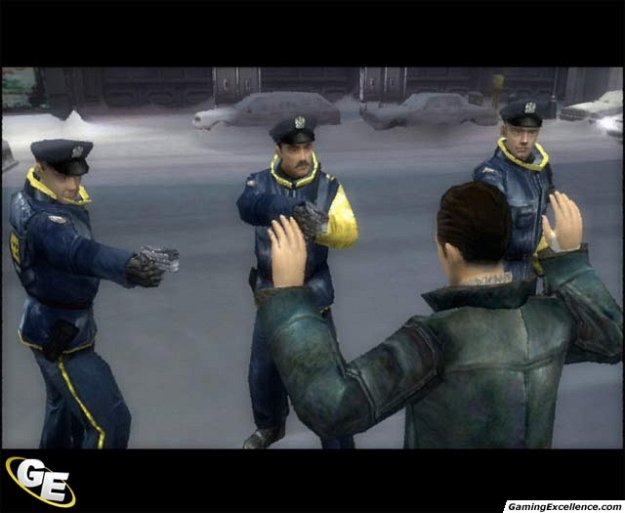 I've always been a big fan of first person shooters and real time strategy games, both of which are plentiful in today's game market. If we looked at a list of my favourite games, it wouldn't take long for titles such as Halo or Total Annihilation to crop up. Never did I imagine that Indigo Prophecy would find a place on my list. Who would have thought that an adventure game could break through into a market dominated by first person shooters and RTS games? It is an incredible feat for the Quantic Dream development team, and it is my hope that we see a sequel to this game.

The first thing that needs to be said is that Indigo Prophecy is not your typical video game. If you are looking for a fast-paced and action packed game, you might want to search elsewhere. The game does have its intense moments, but on the whole it's a lot more about the story than bullets flying through the air. The game takes place in New York City in the middle of winter. One of the main characters, Lucas Kane, commits a murder in a late-night diner restroom. Amazingly, Lucas only realized what he had done after waking up from a trance. Most of the game revolves around Lucas trying to avoid getting caught by the police, and at the same time trying to prove his innocence.

The first thing that I noticed when I started playing the game is that the storyline progresses more like a movie than a game. The highlight of Indigo Prophecy is definitely the plot, and my favorable review of this title really comes down to this. While you control what your character does in any given situation, one chapter of the story will always lead to the next with only slight changes in the plot. For example, you might never find the murder weapon, but you still find out who killed the victim.

There are three main characters that you will control throughout the game. At the outset, you take control of Lucas Kane, a man who committed a murder with no excuse other than the fact he allegedly wasn't in control of his body at the time. Lucas has a brother named Markus whom you will also interact with at different times during the story. Even as a priest, Markus has trouble believing everything Lucas has told him. This relationship between the brothers leads to some interesting plot developments, but I'll leave that for you to discover.

The other two characters that you will be able to use are the two detectives assigned to the homicide case dealing with Lucas's unfortunate encounter with a patron in a diner restroom. Carla Valenti is a detective who seems to always maintain her calm and collected composure. Her partner, Tyler Miles, originally lived on the streets of New York before deciding to join the police force. Tyler provides a lot of unintentional comic relief to the story - who ever heard of playing a game of one-on-one basketball in the snow? I sure haven't, but it's pretty funny to watch.

One of downsides to Indigo Prophecy is that the graphics are not as great as they could be. When the camera zooms in for a close up of Carla on the phone, or Lucas pouring a glass of gin, or Tyler making out with his girlfriend, this issue becomes fairly obvious. To be honest, I didn't really notice this early on in the game. It was only later on when the developers really tried to do a lot of character development and interactions that the graphic detail - or lack thereof - really started to show its true colors (no pun intended). In spite of this, the character models are generally well done overall, with each character having his or her touches that make them unique. As a side note, Indigo Prophecy put a new name on my roster of favorite female video game characters. In my opinion they did an amazing job with Carla and should be given a gold star. Okay, make that five gold stars.

The voiceovers, the music score, and overall audio in the game deserve a standing ovation. The voiceovers for Lucas, Carla, and Tyler are especially well done, and are only complimented by the well-written scripts. The musical score is mostly songs performed by rock band Theory of a Deadman, but also features some other mainstream artists. All of the music in the game is extremely well suited to each situation. The background music is particularly well done in the game's action sequences and really creates a sense of desperation and anxiety.

One of main differences between the PC and console versions of Indigo Prophecy is the control aspect. Whereas my main grievance with the PC version was its difficult to master keyboard scheme, the console version feel innovative due to how they control; sucking you even deeper into the heart of the game. You move your character using the pressure sensitive left thumbstick and when any action can be accomplished, from opening a door to climbing a fence, your options will be listed at the top of the screen. You control these actions using the right thumbstick. Want to rip the door open? Pull back the thumbstick quickly. Want to gently open a cabinet? Slowly pull back the thumbstick. This may be a small detail, but one that manages to integrate you quickly into your character's actions. The action sequences that demand DDR-like button presses are also easily done on the consoles compared to the PC and Strength and Stamina puzzles which involve mashing two buttons repeatedly, are easily mapped out on PS2 (R1 and L1 buttons) and Xbox (Left and Right Triggers). Quantic Dream has done a wonderful job creating a new way to play games.

Indigo Prophecy is a game that I did not expect to like as much as I did. I guess this is because I initially geared all of my expectations toward the norm of today's typical game. That said, you will probably be disappointed if you expect freedom of movement and expansive levels. As I stated earlier, Indigo Prophecy plays much like a movie where the main challenge is to get from beginning to end. The fun lies in uncovering the story, not killing anything that moves. It's a short game, easily finished in about 10 hours, but the rich story makes it worth every minute. At the end, I did wish that the conclusion was a bit more, well, conclusive. Instead of tying loose ends, the writers left it open to many possibilities, thus leaving room for a sequel. Indigo Prophecy is definitely worth playing, just for the experience in itself. In fact, I wouldn't be surprised if I cued up this game six months from now, just to play through it all over again - the story really was that good.

Editor's Note - I agree 100% with everything that Matt has said in his review, but I wanted to stress (even more) the quality and innovation of Indigo Prophecy. I had played the OXM demo and at the time was surprised to see a rendered version of David Cage (Quantic Dream's Director of Indigo Prophecy) greet me in the game's diner and run me through the basics of the game. I'd never seen this before and even though it could have been dismissed as a marketing ploy, there was something special about it and the demo that followed blew me away. A month later, playing the full game and again seeing David's Introduction in the game manual and seeing his rendered form again in a completely new intro/tutorial to the game (the most original one I've ever seen), I knew that a lot of time had been spent to make this game as original and innovative as possible. Furthermore, the more I played through Indigo Prophecy, the more I liked it. How often do games tapper off in quality and originality after the first level (which you've already played in the demo anyways)? Well, IP builds intelligently and logically. Looking back on it though, I enjoyed the two first acts a lot more than the third. As with many films, IP tries to resolve as much as it can intelligently, but in the process seems to throw away some of its built-up characters and notions. The ending is also inconclusive, but where this would annoy me in another game, I really do look forward to a sequel at some point in the future.

From the emotional baggage of its characters, its clever storyboard screen layouts, the haunting score by Angelo "Twin Peaks Forever" Badalamenti, the amazing voice-over work and its intelligent story, Indigo Prophecy is a game that all gamers should take the time to experience fully. It truly leaves an impression.