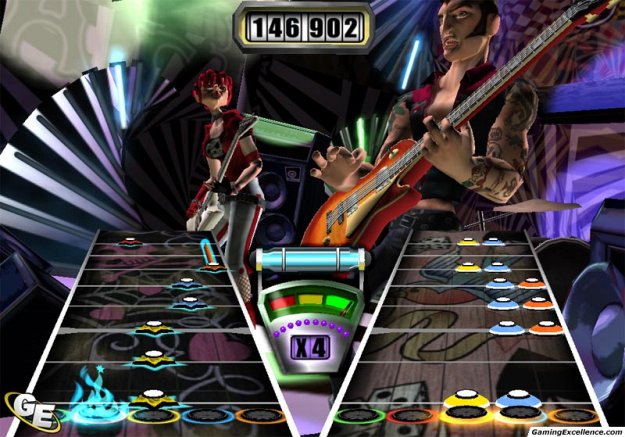 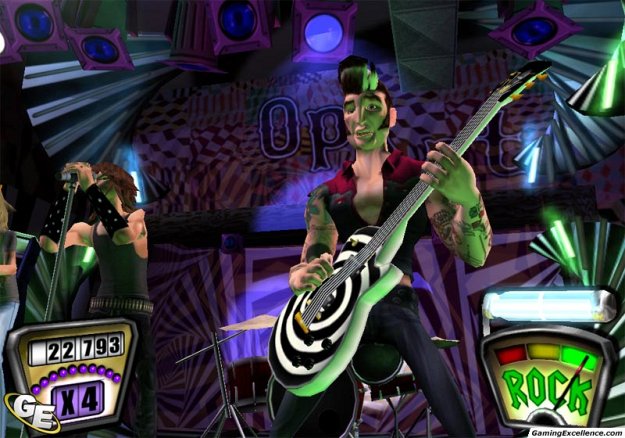 The original Guitar Hero is arguably the best musical game on the market for the PS2. It has great songs from all around the Rock n' Roll spectrum and offers a great peripheral with the Guitar. In fact, it appeals to almost anyone who loves Rock but doesn't know how to play a guitar effectively. After a lot of fans started begging for a sequel, RedOctane decided it was time to deliver with Guitar Hero II. The new addition takes all the great aspects of the original and improves upon them by leaps and bounds.

For those not familiar with the original game, Guitar Hero II is fairly simple to pick up and play. Players first choose the name of a band, and must go to different venues while rocking out to different songs on the guitar controller. The guitar itself uses five buttons to help gamers in performing the different notes of a song. When a particular note comes up, the player must press the appropriate button and strum the note to get the right sound. Depending on performance, the game rewards rockers with cash to buy new songs, new characters, new guitars, new guitar finishes, new clothes, and even special "Making Guitar Hero II" videos. As players progress through the different songs, bigger venues become available and more songs are added to the list. These include the Rock city Theatre in Detroit, Stonehenge in England, and many others.

Speaking of songs, plenty of Guitar Gods are included in Guitar Hero II. You'll find Groups like Van Halen, Guns n' Roses, Aerosmith, The Police, and many. The songs are all new for this second iteration, and it's a very decent soundtrack overall. The addition of bonus tracks adds even more value to the package and most of them are great songs for rocking to. Not only that but the developers really brought their A game when trying to fix some of the problems from the original. Hammer-ons and Pull-offs were much harder to perform in Guitar Hero, but seem much more forgiving in Guitar Hero II (hammer-ons are performed by pressing higher notes and strumming only once for the first note. Pull-offs, on the other hand, are the opposite and players go down notes). These additions make performing songs at the hard and extreme difficulties a bit more bearable then before. But don't let that fool you into thinking the higher difficulties are a cakewalk. The notes are faster and more plentiful than before, and the addition of "three button" notes is sure to keep players gasping for air. Which is exactly why it's great to see that Star Power is back. For those not familiar with the first game, Star Power lets players raise their guitars and increase their points. It also makes the crowd meter go back up faster, which is great for those times when you've been missing a lot of notes.

Luckily, the harder difficulty level isn't the only new thing about Guitar Hero II. The developers listened to the fans of the original and added an all-new Training mode. The first Guitar Hero did have a tutorial, which is still present in a similar form in the new version. But players can now choose to play in practice mode and really learn how to nail a tune. This new mode works by letting players go through a specific part of a song or the entire song. The choice to slow the song down is also available. These features help a lot in learning all the difficult parts and don't force players to go through the easy part over and over while training. So while Guitar Hero II is certainly a much larger challenge than its predecessor, it does offer all the tools needed for rocking all the songs.

While the single player and training modes are great, the multiplayer is the biggest reason to go back and play Guitar Hero II. The original game offered multiplayer but Guitar Hero II hits you in the face with three modes of play. The first one is co-op mode and divides a particular song into two sections. While one player takes care of Lead guitar, the other must play Rhythm or Bass guitar. Not only that, but the game also lets each person choose a specific difficulty setting. So a hardcore Guitar Hero fan can play with Grandma and still have a blast (Though the box does say you should watch out for heart problems while playing this game, so Grandma is probably a bad idea). Also in true co-op form, both players need to lift their guitars at the same time to activate star power. Faceoff mode is also present and unlike co-op, lets players face off against each other while playing sections of notes back and forth. The final multiplayer mode is Pro-Faceoff and it can only be unlocked by beating the game. This mode also pits friends against each other but both have to hit every single note as if playing single player.

While all those are great additions, what truly makes Guitar Hero II what it is are the songs. And the selection is still just as awesome as ever. A lot of hits such as "You Really Got Me" by Van Halen, "Message In A Bottle" by The Police, "Sweet Child O' Mine" by Guns n' Roses, and many others, make this game truly special. However, a lot of the songs that fans begged for are not present in Guitar Hero II and as great as the song selection is, it could have been better. But I guess the developers have to leave something for Guitar Hero 3. The official tracks would have been great by themselves, but Guitar Hero also features a lot of bonus tracks attainable by using the money gained from single player. These are just as fun to play as the main song selection and offer a lot of replay after a marathon of "Misirlou" by Dick Dale, and "Free Bird" by Lynyrd Skynyrd.

These are all factors that really come together to make Guitar Hero II a blast to play. The game is just as fun as the original if not more so, and rocking the guitar is really addictive. The addition of Widescreen/Progressive scan for those with HDTV also makes the game look better than ever. If you're looking for the best musical game out there on the PS2, look no further than Guitar Hero II. An experience in itself, Guitar Hero II is definitely worth checking out.