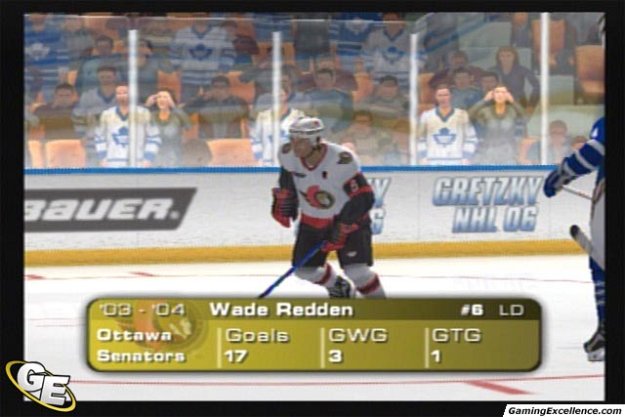 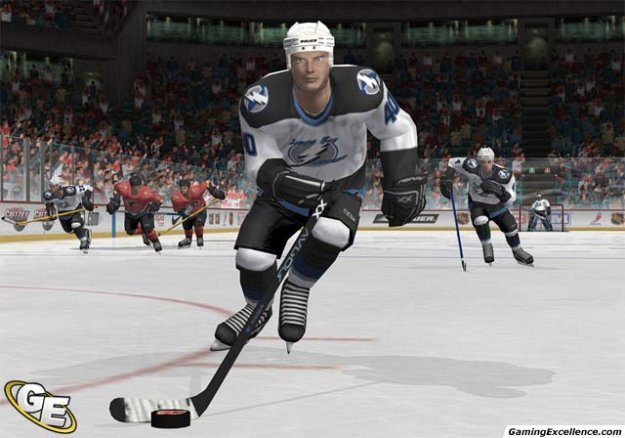 As a Canadian based publication, one of the things we tend to do in our spare time is watch Hockey. We talk Hockey. We sometimes consider the theme to CBC's "Hockey Night in Canada" the second National Anthem. Finally, we play hockey to no end, in both real life and virtual reality.

This is where Gretzky NHL 2006 comes into play. Made by Sony's sports game studio, this is the sequel to their surprisingly half decent game, Gretzky NHL 2005. However, this time around it simply does not stand out from the other games made by Electronic Arts and Sega. At the end of the day, Gretzky NHL 2006 is a game that can be played by hockey fans, but just because it is endorsed by "The Great One" does it mean that this is the great one itself.

I am going to make one point clear before I continue with this review. If, for whatever reason, you are not a fan of Gretzky himself, you should avoid this game like the plague, as playing it would result in you wanting to burn your PS2. This suggestion may sound odd, but you'd be surprised.

One of the biggest problems about this game is that it does not know what it wants to be. Does it want to be a simulation? An arcade game? One of the examples of this is the fact that the game plays fast. While hockey is naturally a fast sport, this game takes it to the next level. Having pure speed in the game would be perfectly fine if it was an arcade game, but this game throws standard rules at you; naturally, this leads to a general feeling of "what kind of game am I playing?"

Another frustration about the game play is its shooting mechanics. Basically, in order to shoot on goal, using default controls, you have to press and hold R1, then use the X button to shoot. If you hold the X button, you can 'charge' how strong you want your shot to be. This idea is sound and enjoyable. However, the aspect of shooting I do not like is the aiming mechanism. Basically, when you are in the shooting position, you can control where you want to shoot on goal using the Left Analog stick. If the game had a more slower pace, then this would be somewhat of a practical option. However, considering the arcade-like speed of the game, you usually do not have time to pick a specific spot to shoot before the other team attacks you. On the topic of shooting, its one-timer system is also flawed. Usually when you make a one-timer in a hockey game, you know that you have made one through the speed of the shot. However in this game, more times than not I did not know if I was making a one-timer shot or a pass towards the goal.

The computer AI on normal difficulty is acceptable, but be prepared to see them literally pass circles around you. Apparently the passing system works differently for the AI because nine times out of ten you will not be able to do give and goes like the AI does.

This game has the standard sports game options: Quick game, Franchise, Online, Tournament, Practice, and Create a Player. However, this game has a few new options that are specific to this game. Rivalry is a mode that allows you to play rivalries without actually having to play a season. You can play either 11 games, 25 games, 51 games, 75 games, or even 101 games (you can save your progress). In truth, this is a useless game option; you can do this without using the "rivalry" option. Besides, making your own rivalries will probably not be as exciting as actual rivalries, such as Toronto vs. Ottawa, Montreal vs. Boston, and Colorado vs. Detroit, only to name a few.

Wayne vs. Wayne; the best way to describe this mode is that it is a pure arcade. You pick two games and start the game as usual. However, the game plays a lot faster than normal and there is a lack of rules. While you play you will notice a meter designed for each team; for every "good" thing you do on the ice for your team (i.e. body check, a complicated pass, etc) you earn points; this is also true for bad things you do that go against your team. Ultimately, when you get up to 99 points, you can call out "The Great One" to play on your team for a limited amount of time. At this time, you will have 6 players on the ice (since Gretzky himself will be on it) your team is better at nearly every attribute, every player has the potential to score a goal, and the other team actually becomes slower. In other words, you will be on the power-play to end all power plays. The "power play" will end once any team scores, or the opposing team kills off the "power play". Surprisingly, this mode can offer a lot of fun, especially considering it's the only part of the game that actually knows what it wants to be.

Basically, try to picture hearing two guys talking about a play that occurred 10 seconds ago using very vague comments and even pronouncing many of the names wrong. Then try and listen to this for a half hour. The sound effects, from the crowd cheering to the sounds of passes and shots off the post, sounds fine as expected. The music that plays in between periods and on options screen are very cheesy techno beats. Personally, while playing this game, I would be listening to other means of audio entertainment, anything other than what's provided here.

If you could play this game from afar, the game would look very pretty. However, seeing how you would be playing it relatively close to the television, you will notice that the graphics are nothing special; in some cases, they are downright ugly. The "detail" that was put into the jerseys of the teams is an example of this. The jersey just looks like it was painted onto the player. Also, while some of the fans that are present in the game are animated, the areas tend to look very empty. I find it very hard to believe that the area would not be sold out at a Toronto vs. Ottawa game. However at least the ice looks nice and white.

While the game may say that it is 2006, all of the stats are based from the 2004 season. In other words, this game is dated from the get-go. It does not have the trades made from the "Sidney Crosby sweepstakes" which occurred before the season began. However, you can download updated stats online for free.

This game features many videos made by "the great one" himself on how to play the game. Even though the videos were explained using in-game graphics and in game controls, the concept that were explained were very interesting, and I've been watching hockey all of my life. Whether you were a fan of him or not, this game will make you very annoyed at Gretzky. There is even an option dedicated just to describing the history of Wayne. All of his performance stats as a player are at 99. Also, while playing the "Wayne vs. Wayne" mode, the commentaries speak of Wayne as if he was the Pope of hockey himself. This becomes very annoying very quickly.

Gretzky NHL 2006 is a game that does not know what it specifically wants to be; does it want to be an arcade game? Does it want to be a simulation game? No one really knows. The end result is that this game tries to play simulation while using arcade physics. This ends up with the game playing faster than it should while using techniques that are better designed for more slower paced games.

This is a game that should only be picked up if you are starved for video game hockey, the other hockey games on the market are sold out, and you see this game for no more than twenty bucks on the shelf. Even then, the twenty probably looks better in your wallet.

Overall, while this game is not completely bad, there is no real reason why anyone would purchase this game over the other games in the market. Just because Mr. 99 himself is on the cover, doesn't make it a good hockey game.