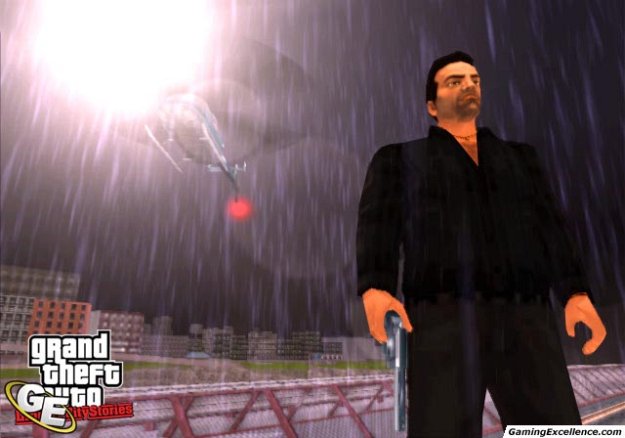 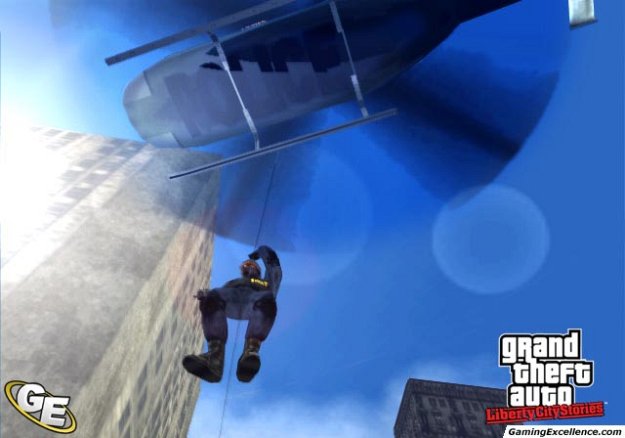 First let me qualify myself as a Grand Theft Auto nut. I own all of the 2D topographical games including London 1969, and still enjoy them from time to time. I bought GTA III the day it was released, and then stood in line for both Vice City and San Andreas. Personally, I feel every new entry in this series has been an improvement on preceding titles, until Liberty City Stories that is. Don't get me wrong people, it's still a 3D GTA and there are a couple new little things here and there, but for the most part, this entry in the series is a clear step back from the overwhelmingly expansive San Andreas.

Liberty City Stories covers the story line arc of Tony Cipriani, who mobster players of GTA III will instantly recognize. The story is supposed to be set in 1998, just before the events of GTA III. It's a classic tale that goes something like this: Mobster gets out of the joint, mobster gets tired of answering to small time crooks, mobster kills boss and begins to rise through the ranks of the Leone family. Tony's crazy mom is even in there, some deranged killer... and Donald Love. Yay! The problem with having to write this review is that it's hard to convey sarcasm. Everything about the story is truly forgettable, not that it strays too far from the formula in other GTA games; it's just too formulaic. Add to that the fact that the mob thing has already been done in Vice City; you can almost bet that the producers of the game were at least partly responding to all kinds of silly fan boy rhetoric on the forums talking about the fact that GTA should have a dedicated mobster themed game, which was no doubt followed by a whole bunch of "LOL's" and "OMG's". The bottom line is that I found it really hard to get into the story, and most fans of the series will likely agree.

Let me share a major gripe of mine with regard to this entry right out of the gate: the radio stations and the songs that play on those stations are a total and utter disappointment. The good folks at Rockstar should have really executed this with more care and effort, especially since Vice City's soundtrack was a powerful element to the overall game because it enhanced the player's experience by immersing them in the era in which the game was set. San Andreas missed the mark to some degree, but did an overall good job at immersing the player in the early 90's. Liberty City Stories takes a quantum leap backward from both of these games with regard to the quality of the soundtrack simply because it includes mainly unknown songs that have almost nothing to do with the era in which the game is set. In fact, the whole thing stinks of the producers not wanting to pony up the cash for the rights to use some well known music, or of staff thinking they are so funny that they decided to take a crack at doing cutesy tongue and cheek songs, or all of the above. The point is that the songs aren't funny, they aren't catchy, and they detract from the play experience as a whole. The music is even less recognizable than that in GTA III, which really didn't have any good music to speak of unless you were intimately familiar with the Scarface sound track. Fortunately for Rockstar, most fans of the game were. The talk radio is still kind of funny, but I didn't spend a lot of time listening to it as I decided pretty early on to keep the car radio off.

I could forgive this if Liberty City Stories was the first in the series, but not now that I've been spoiled by the great music in past GTA games. A special shout out goes to the sound effect for hitting someone with a Police baton. It sounds like wood should when it bounces off of a skull; I haven't laughed that hard hearing a sound effect since going on rampages through the North Point Mall in Vice City with a hammer.

On a more positive note, the only thing that redeems this game is that it still looks and plays very much the same as all other GTA games. The presentation is very similar to other entries, but the graphics seem to be a step back from SA and sort of in line with GTA III and Vice City. For some reason this game suffers from a couple visual glitches, but nothing too earth shattering. It feels more like GTA III than it does VC and SA, with the new exception being that you can now ride motorcycles in Liberty City. You can also fly helicopters; just don't jump in the water because you can't swim. It's pretty obvious that Rockstar is still using the GTA III game engine.

I still love driving around town committing random acts of savage violence; it's a nice diversion from having to play through the story driven missions. You still have your taxi mission, ambulance missions, cop missions and side missions all very much alive and kicking though. Players will note that the control set up, and specifically the aiming feels like a mix of GTA III and San Andreas. Your aiming reticule is similar to SA (kind of Manhunt style), but you can't click the analog buttons to bring up FPS style aiming. It's a little off putting at first, but you get used to it. You can use the right analog stick to look around while running which is a little less tank-like than GTA III. The physics for vehicles are more akin to the more recent games than the original. Cars take an awful long time to explode mind you, which is more like earlier versions of GTA. Fans of GTA III will note that this game will punish you with long wait times to shake one star should you be observed punching out an old lady by the fuzz and decide to run and hide, rather that seek a police bribe or hit a pay n' spray. If you've only played SA, then you're in for a disappointment, because Liberty City is tiny in comparison. For long time fans, however, you'll find yourself sailing around a familiar city, taking in well known sights and sounds. The upside is that it's a heck of a lot more manageable to play this series on a smaller map. I am addicted to the expansive environments, but I remember the first time I played. Love it or hate it, this is the debut city for GTA in 3D and it deserves props even if it doesn't take ten minutes real time to drive from one side of the map to the other.

At the end of the day, Grand Theft Auto: Liberty City Stories is still a lot of fun to play given that most game play elements that fans have come to enjoy are intact. Unfortunately, key elements of the franchise's presentation that made past installments in the series so memorable don't show up here. Heads should roll at Rockstar for the lame soundtrack. I wasn't expecting any huge improvements on other games in the series, but I didn't anticipate such a let down either. I guess we'll have to wait for a next generation GTA game in order to see the bar raised for this genre of game. As it stands this entry is a significant downgrade from others in the series after playing San Andreas. Rent it if you have to see how Tony Cipriani's story plays out, but take it from a GTA nut - it's not a bad game, but you won't find it on my GTA wall of fame anytime soon.