Genji: Dawn of the Samurai (PS2) 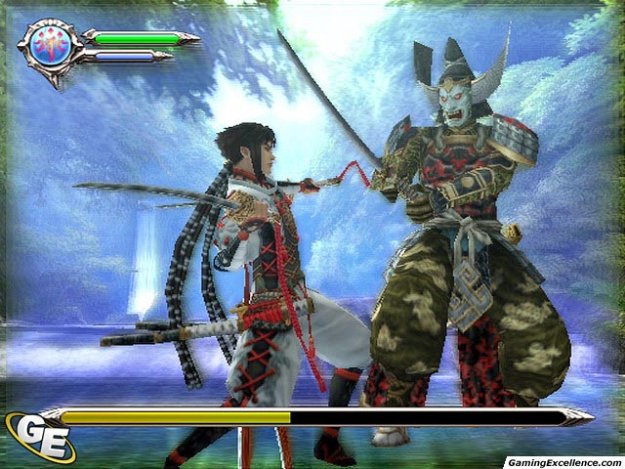 Once in a very great while, you find games that are so utterly captivating and spellbinding that the world around you just ceases to exist. A game that brings forth new ideas, new concepts or new gameplay mechanics that simply humble you with their greatness. These are quiet, personal moments etched in time that seem as real as watching Olympic dreams realized or the unfolding dramas of a breaking news report. I remember quite fondly a long weekend I spent playing Tomb Raider 2 and finally finishing it after some 35-odd hours. I remember perfectly the movie theatre in the sunken ship that sent bad guys my way as the music changed. I recall perfectly in my mind's eye the color and textures on the walls and the wonderful feeling of perfect nostalgia this level was gripping me with. I remember picking up Gran Tursimo after working a 12 hour graveyard shift and not sleeping for another 18 hours because I was afraid I was dreaming the whole time and waking up would put an end to my perfect gaming bliss. Metal Gear Solid had me begin a new game the moment Snake cruised away on a snow mobile and then forced me to sit down until I'd seen the credits again. The sounds and visuals of Symphony of the Night still keep me up at night. The characters of Final Fantasy 8 still haunt me; from the cold and elegant resolve on Quistis' face as she visits Squall in the infirmary to seeing Rinoa looking down at Squall with her pendant balancing between her blue knit shirt. Link's first N64 adventure had me sleepwalking for days. Parasite Eve gave me chills and the Chrysler Building never seemed so appealing or frightening. Resident Evil 2. GTA3. DOA2. Silent Hill. Half-Life. Ninja Gaiden. Max Payne 2. Xenosaga. These are the games that have not only robbed me of sleep but that have defined lasting moments in my life and heightened my expectations for all games. Now, with the advent of a new console generation, many developers seem to have already moved on to the 360 or the PS3, but it's nice to see Game Republic and Sony release another a sleeper title that has robbed me of many hours of sleep and which I will proudly add to my list of games above. Genji: Dawn of the Samurai is an instant classic and nothing short of a masterpiece.

Feudal Japan, 1159 A.D. The era of civilized aristocracy is over and violence paints the nation in blood. The ruthless Heishi clan has seized power and crushes all those who oppose it. Of those crushed, the Genji clan was all but annihilated. This may well be the era of the warrior but the men who assume power do so using the secrets of the Amahagane stones. These mystical jewels bestow upon the bearer godlike powers called Kamui which bring forth the power of God in good men and that of pure evil into the hands of the corrupt Heishi. At this same time, a young swordsman named Yoshitsune, who's father fell to the Heishi, comes of age in a remote, sacred mountain shrine and will soon set out to follow his destiny (with the unlikely help of his large friend Benkei).

This is the epic tale that Genji sets forth. Yes, the largest fault against it is that it is a short adventure (under 9 hours), but nonetheless a potent and honorable one that is thoroughly enjoyable and infinitely memorable. Upon completion, you will also unlock 2 different difficulty levels and the option to replay with all your stats and equipment giving you a true sense of samurai domination. In fact, I enjoyed Genji more the second time through for the simple reason that I actually felt like my power was in league with my wrath. I was powerful, fast and let's face it, a total ninja bad-ass the second time through.

If the story of Japanese lore and mythology wasn't enough to sucker you in, the perfect controls, fast gameplay and enjoyable RPG-like upgrade mechanics will win you over easily. For the uninitiated, Genji plays fast. Make that play real fast. The Xbox may have Ryu Hayabusa, but the PS2 is no slouch with Yoshitsune. And what speed Benkei lacks he more than makes up for with complete and utter destructive possibilities. You can play the game as either character and for those looking to find all the weapon upgrades and hidden Essence of Amahagane you will be forced to play through each level using both characters. While this may seem a chore in other games, the differences in gameplay between Yoshitsune (fast samurai) and Benkei (bulky warrior-monk) are subtle and diverse enough to make each play-through (the same level) exciting and different.

The controls for each character are basic but with a subtle depth to them. The left analog stick controls the movement of your character while X enables you to jump. Jumping as Yoshitsune allows you access to far-away ledges and also allows you to double/triple jump up mountains, etc. The Square button is your normal attack while the Triangle is your special attack. Fans of Dynasty Warriors will recognize the set-up immediately (as I did) but playing using the DW mentality will be counter-productive as Genji plays completely differently. Circle is contex sensitive and initiate conversations/investigates items. R1 places you in a defensive stance (though don't get too used to it) and L1 enables you to use your Amahagane Stone and places you in Kamui mode (or as I like to call it: DDR-Hyper-Bullet-Time-Mode!). The directional buttons allow you to use equipped items such as medicinal herbs or power potions which affect power/defense stats or resistance to certain elements. All the controls in Genji are fluid and instinctive. And it's nice to link movement with attacks to form large combos which then net you extra experience points and bonuses based on skill and attack counts.
DDR-Hyper-Bullet-Time-Mode AKA Kamui is one of the most enjoyable modes ever put into coding. While it is possible to unleash double and even triple Kamui, the basic gist of it is as follows: Time stops and slows to a crawl allowing you to easily avoid enemy attacks but also allowing you the ability to execute devastating attacks of your own. By simply pressing the L1 button, time slows to a crawl and enemies slowly move to attack. As they do, the Square button will quickly flash beneath your hero's feet. If you press this button at that precise moment, Yoshitsune or Benkei will avoid the attack and counter, easily eliminating your attacker. This technique can be used on boss characters as well, but will have to be repeated as it doesn't kill bosses outright but damages them significantly more than a normal chained attack will. However it may sound on paper, Kamui never gets old for the simple fact that it is drop-dead-cool and also unpredictable. Each enemy will attack in a difference cadence, and so, the Square icon will appear at unpredictable moments. Landing normal attacks against an opponent replenishes your Kamui gauge and allows you to keep the carnage going. So satisfying.

As mentioned earlier, stat building, weapon upgrade/construction and finding essence is also a big part of Genji. With each kill you gain experience that will enable each character to level up. It should be noted that although they level up together, the essence that you use to level up their attack/defense/health bar are separate and it's not inconceivable to find yourself with a seriously unbalanced duo if you don't pay attention to this fact. Finding new weapons is fun, but finding the hidden Essence of Amahagane is even more enjoyable. Each essence is invisible and the only way to know that there is one in the vicinity is to keep a keen eye on your Amahagane meter (which will flash) or feel for the dual-shock's vibration. You then have to start swinging blindly into the air until you "hit" the essence and collect it.

Genji's gameplay is accentuated with many cutscenes and in-game cinematics. These may seem frequent, but that's only because "playing" Genji is so enjoyable. If the game was simply a Yoshitsune/Benkei against 100's of opponents in succession, the game would still be enjoyable. The story is intriguing, but some "breaks" in the action are a little disappointing since they also seem to happen at the height of an adrenaline rush. For their part, the cutscenes are breathtaking and being able to watch them again upon completion of the game is a nice bonus. Another nice bonus comes from beating the game on hard mode; very nice character and enemy artwork and renders. Yes, Genji ends much too quickly, especially considering at what point the "trial" level takes place, but it is so enjoyable and fun that many play-throughs are easily warranted. It is a compliment to Genji's perfect gameplay that we simply wish it wouldn't end and instead go on and on.

If the gameplay, story and cutscenes are any indication of the level of quality Genji strives for, its graphics will still surprise you. This and God of War may be the two most amazingly rendered games on the PS2. From the fluid animation of the characters, the Kamui slow-mo mode, the ornate details to be found everywhere, the costumes, etc. it's a true testament to the PS2's and the developers' greatness that the game never slows down, never hiccups and never looks anything less than stellar. The game is not only a technical marvel, but the art direction is brilliant and everything from the smallest detail (jewels on a statue) to the biggest (the sky overhead) has been scrutinized and doted upon. This game feels like a living, breathing work of art.

The game is presented in Japanese with English subtitles. This should please all purists out there. Although I don't speak Japanese, the voice acting doesn't seem over-the-top and the voices are well heard and evened out. Genji also features some of the most hypnotic battle hymns, drum solos and soft duets you'd find anywhere. No aspect of Genji has gone unnoticed and the audio presentation is nothing short of amazing. If this weren't enough, the game is presented in Mono, Stereo, Dolby Pro Logic II and Dolby Digital Pro Logic II (with cutscenes played back in Dolby Digital 5.1). You can also adjust the audio of both Dolby presentations to select listening positions which will affect how in-games sounds are oriented: as if you were the hero, relative to the camera or relative to you (standing facing the screen). Yes, I spent quite some time experimenting with the audio presentation (there is a BGM mode unlocked upon beating the game) and I was smitten and duly impressed by Genji, yet again.

In the end, the only thing that can play against Genji is its length. As a reviewer with lots of games to play through, I appreciated the length (and still played through it twice), but as a gamer that saves his hard earned cash for one purchase, will Genji truly satisfy? Sony seems to have taken this into account and priced Genji at a lower price-point. Will you be playing it for hundreds of hours? No. Is there a multiplayer mode? No. Is Genji a work of art that should be appreciated on a completely different level than most games? Absolutely. Genji should be played by any gamer looking for one of the finest and most memorable gaming experiences out there. At the very least, Genji is worth a rental. Few games are this well crafted and captivating. A true gem.