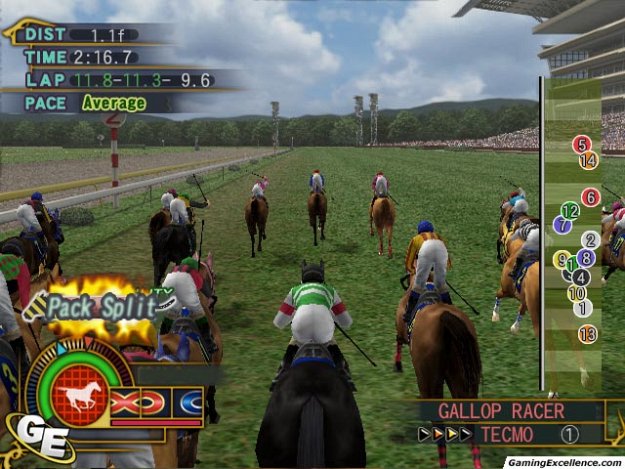 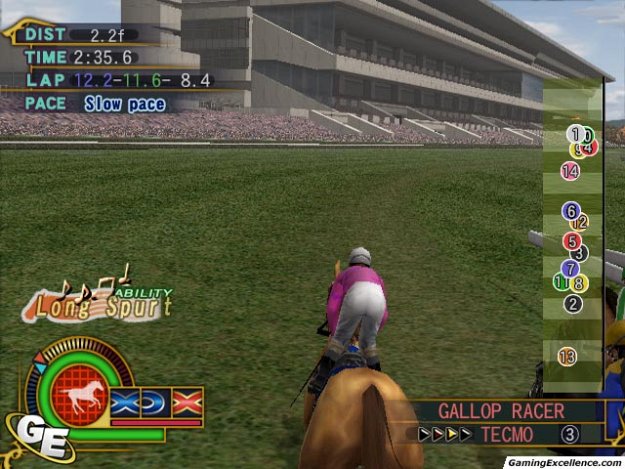 Are you a fan of horse racing? Do you know the differences between GIII and OC? Does breeding horses of various pedigrees interest you? If not, then perhaps Gallop Racer 2006 is not for you.

This horse-racer from Tecmo is a sequel in the Gallop Racer series, one in which you ride your horses through tracks around the world to win titles and prestige. It's a lesser-known series, I'm sure, but from what I've been able to gather, it could appeal to those fans of the sport.

The gaming experience is unique, and quite different from your standard racer in many ways. Most importantly, you don't control your vehicle, in this case your horse. Instead, you control your jockey on the horse, and hope that the beast will follow commands. There's the chance that it'll go wild, lose enthusiasm, or feel too jittery to race well. How you race with your horse determines if it improves its abilities, or if it loses them through frustration.

The meat of the game lies in the theme park mode, which we'll get to in a minute, but there are also a set of extra modes you can play, if you're just looking to race without the need to win, or some practice (and if you're new to the sport, believe me, you will require practice.) In the oddly-named simulation mode, you'll be able to craft a specifically-defined race, defining everything from what the jockey racing will be like, to the horse and its abilities, to the weather hitting the track. You can race these personally-tailored tracks in the VS mode, a two-to-four-player racing tournament, and free mode, your basic practice mode. In this, you can just practice racing through tracks on any horse, with any competitors you specify.

Now, this is just fluff compared to the (also oddly named) theme park mode, mentioned previously. You'll start out with defining your jockey's name, gender, and uniform, and set him out on the racing world to win titles, races, and awards. To start, you can pick a horse to start on its multi-year career, or you can try to breed your own top-grade pedigree, an involving process that can reward you well if you manage to do it right. This is a lengthy venture that requires a lot of time, a lot of points (think of it as the game currency,) and a lot of luck. It does let you feel much more attached to your horse, however. There's not a whole lot to it, you just choose your mare and your colt and let them have at it, but it requires deep planning to look down the family line and figure out what kind of horse you're going to want later on.

The graphics of the game are pretty good. The horses move fluidly, and you'll watch your jockey take different stances as you speed up or pull back on the reins. The tracks are colorful and have different layouts to each of them, so you don't necessarily feel that you're racing the same track over and over again. Of course, there's only so much variation that these places can go through, but at least it's obvious there's some effort put in here.
Now, after you've picked your horse, registered for races, and gotten all psyched up to race your horse, you finally get to hit the track. You can first purchase a betting ticket to make a wager about the placement of the horses, in order to make a little bit of money on the side. And then you've reached the part of the game that seems to trouble me the most: the racing.

When you race horses, if you do not go as fast as you can right out of the gate, you'll lose. If you do not make sure you go faster than other horses, you'll lose this way too. There are many nuances and tricks to racing horses. Now, if the manual would actually tell us that, this might have been a more enjoyable game.

That brings me to perhaps the largest problem with this game and, I suspect, the rest of the series: though this game is in a niche genre, it doesn't make any attempt to help the player, should they not know everything about horse racing. The manual explains many aspects of the game, and were I a fan of the sport, I'd likely find it very informative in helping me navigate through the menus and figuring out how to do what. Additionally, before each menu screen, a woman appears with the briefest of explanations on what each of the options do. But these are just not enough.

I believe it was my sixth race, after getting close to last-place yet again, that I realized I had no idea what I was doing. Was I supposed to keep pace the entire time? Speed up just at the beginning and end? Or maybe just at the end? Heck, it took me a couple races just to figure out what a 'spurt' was and what I was supposed to do with it. And I don't know how long before I figured out that a furlong was actually a measure of distance.

As I played the game some more, I began to figure out what I was doing (there's also a control scheme where you allow the computer to control everything in the races and you just control the whip, something I found very helpful.) And as this happened, I began to enjoy the game some more. The controls are easy to learn, and the theme park mode has a lot that you can get into, and a lot to win if you're particularly skilled. The learning curve is quite a killer, though, and it's easy to see why many gamers could be turned off by such a title.

In the end, it seems Gallop Racer 2006 is destined to stay in a niche. With a lack of any useful tutorials on the proper way to race, or some sort of a glossary (for the curious, one furlong equals 660 feet), this game looks only to appeal to those who are already interested in the sport of horse-racing, and likely won't appeal to those who aren't.