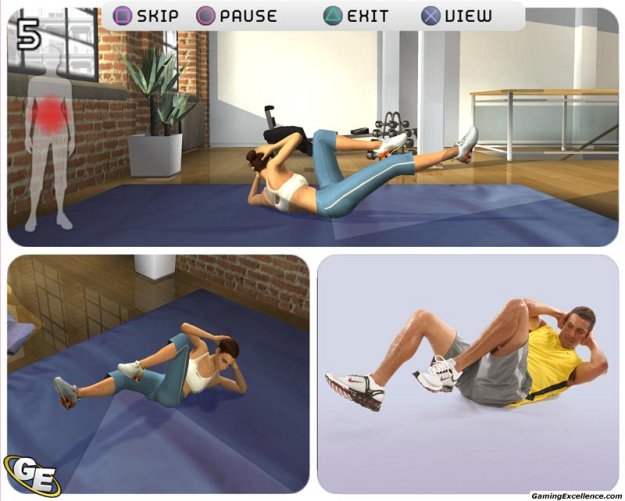 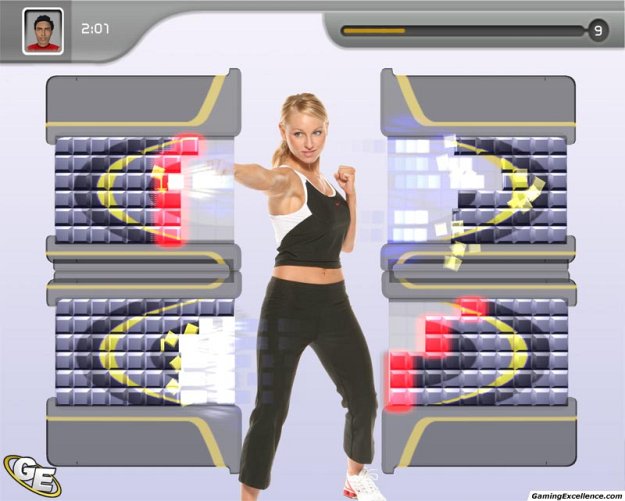 It's been quite a few months since Sony introduced the Eye Toy to the North American market, a USB camera that captures a player's movements on screen. While most of the games that take advantage of the technology have felt more like tech demos than well-rounded titles, EyeToy: Kinetic aims to change all that by bringing fitness to the small device. The result is a good workout for active people and couch potatoes alike.

There are numerous modes available in Kinetic that allow players to choose from varous workout styles. Using the personal trainer mode, a male or female trainer will create a 12 week program based on various questions such as height, weight, and activity levels. The 12 weeks are split into routines that can be done on various days depending on your choice. These combine a stretch and warm-up, followed by exercises from Kinetic's 4 zones of training. The zones are split into Toning, Cardio, Mind & Body, and Combat exercises. Depending on which zone is selected, players may or may not have to use the EyeToy camera to actually succeed in the exercise. The toning zone for example is made up mostly from exercises that do not involve the EyeToy and should be performed on the floor. While you can still position the camera to see yourself on the split up screen with the trainer, there's no motion recognition required for these drills. The cardio zone on the other hand is entirely based on motion movements that require agility and speed. These vary from touching certain objects to avoiding oncoming targets. The cardio zone also makes use of the entire screen instead of splitting it up between the player and the trainer. The combat zone is also very similar to the cardio zone except that movements require greater speed and strength. While it is hard to convey strength to a videogame, the camera tries to pick up how fast different movements are performed and translates them for the game. One of the exercises that use this ability is the brick wall, since depending on how hard your hit is, more bricks will be destroyed rather than just a few. The last zone in Kinetic is called Mind and Body and these involve both on-screen motion exercises as well as off-screen ones. However, these usually involve very gentle movements that need not involve speed or strength. While some of them may require players to gently move their arms or legs to specific places on screen, others will involve passive drills such as meditation.

Most couch potatoes however will have a problem committing to exercises on specific days for 12 weeks. In order to cater to the more casual player, Kinetic does offer each exercise separately instead of having various routines in a sequence. By choosing the routine maker, players can choose between the different zones of exercise at any time. The game will advise players to always warm-up before any activity but the warm-up routine before the exercise can be skipped. Kinetic also allows for stretching and other preparatory activities to be performed separately. These can be accessed from the tutorial menu, although the placement for them is in a bit awkward.

Despite all the great features this game offers such as exercise tracking and performance graphs, there are still quite a few disappointing points. One of the main problems with Kinetic is that players need an awful lot of room to play this game. So unless a particular PS2 is not located in the vicinity of a small room or a crowded living room, players may have some difficulty with performing exercises without breaking some indoor furniture. This fact is highlighted well by an elderly lady in one of the game's opening video tutorials. The EyeToy camera also happens to be very difficult to work with and adjusting the focus and camera placement could take several attempts. While other games that make use of EyeToy only require simple hand gestures, Kinetic makes use of very specific movements from both legs and arms and the hardware simply cannot cope with all the motion at times. You may also have trouble making sure that the camera doesn't recognize a desk behind you as part of your body. That being said, Kinetic is a great attempt at utilizing the EyeToy camera and the games themselves are quite fun to play regardless of whether or not you're a couch potato. Depending on whether or not players have plenty of space around the TV (a backyard with your PS2 hooked up outside is ideal), EyeToy: Kinetic may be one of the best titles of its kind.