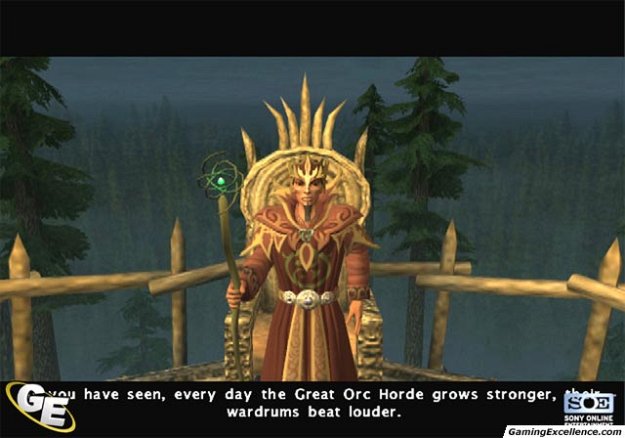 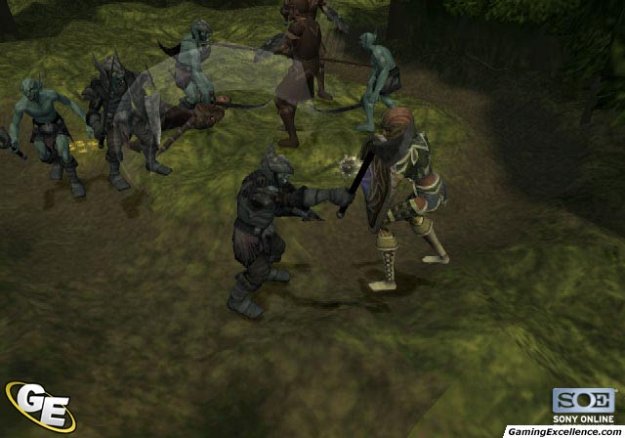 I love discovering a good game. You know, the ones that have been out for a while and that you've never really payed a lot of mind to only to chance upon them as a fluke and wonder how you could of lived without them? Well, Champions of Norrath is exactly that kind of game. I was at my Editor's place to pick up a few other titles and he handed me COF. I looked at it, recognized the box art, but hadn't really ever heard of it. I remember attempting to get out of it, but in the end I took it home and set it aside somewhere for a rainy day. The rainy day came and went and I still hadn't touched it. I know; I'm a procrastinator sometimes. Finally, I knew he'd be asking about it so I put it in and was completely amazed at my sheer dumb-assed-ness (it's a word!). Champions of Norrath took everything I liked about so many wonderful games like Diablo and Baldur's Gate and Dungeon Siege and stepped it up a notch. It added amazing graphics, good voice-work and a fighting/upgrading system that instantly made sense and was intuitive to me. I've since played it for over 50 hours and can't really remember what life was like before taking on the call to arms.

To get the least interesting out of the way; the story is typical. The city of Kelethin is under siege and you have been asked by the King himself to make a difference. There's a hint of more to come but that's the initial premise of COF. Whether that tickles your fancy or not is irrelevant since any good dungeon crawl isn't really about the over-reaching story but the small battles that get you to the finish. And in this respect, COF shines. From the moment that you create your character (choice of 5 races, male or female) and distribute your attribute points, you've already got a feeling for the type of game COF is going to be; intelligent, well structured and easy to get into. Your first task is clearing out the treetop city of the Faydwer wood elves. Here you'll come to learn the controls for attacking. And this is what makes COF so good; attacking "feels" right. It's not about mashing the X button (because that will get you killed) but about the cerebral action of slicing with a sword. Timing is everything. Add a shield to the fray and now you have a real party on your hands. Later on, using bows and magic only adds to the beauty of the game. In this respect, a lot must be said about the controls which are precise and intuitive. Healing, using special abilities (not to mention mapping out special abilities on the fly), defending and attacking are all handled expertly. The only small gripe that players of the PS2 Baldur's Gate titles will have is that there is no jump button. A small concession but I admit that I did enjoy jumping into pools of water in BG.

The controls would be nothing if not accompanied by a competent camera system. COF offers a user-controlled camera which is fast and responsive and never interferes with the action. Better still, you get 3 zoom levels which will not only help you find little hidden artifacts along the way but let you appreciate COF's amazing graphics. The PS2 does have it share of beautiful games, but COF is still a wonder to behold. From the loading menus and title screens right down to your avatar and the mounds of dirt on the dungeon floors; COF is without question one of the best looking games to ever grace the PS2. It even manages to put a few recent PC dungeon crawls to shame. The price of this? The game must load whenever entering a new dungeon level or area. The load times are not that long, but they are present nonetheless. Accessing your character options and inventory, however, is quick and seamless and a simple press of the O button brings you right back to the action at hand. My only gripe with the graphics is that some dungeons seem awfully dark, to the point where it's hard to see items strewn about the floor (necessitating me to basically walk over an area slowly enough to trigger all item hot-spots). It's a small gripe but one that slows the pace of the game down a bit.

The audio portion of the game is wholly sound and competent. Leading the cast of voices is Malcom McDowell who delivers a good reading of the source material. Let's face it, it's hard not to sound over-the-top sometimes but regardless of what character you choose, the voice work is very professional. You will eventually get tired of hearing certain comments and phrases repeated over and over, but there is enough variety in the mix to spice things up. The score of the game is masterful and completely fitting to the experience and would seem right at home in a Hollywood epic. Positional audio also helps and adds a lot of nuance to the proceedings.

What COF also offers that may push many over the fence is 4-player multiplayer action. Whether online of off, you can play COF with 3 other buddies and help each other out. The online portion also supports USB headsets to help coordinate your attacks. The game plays identically to the single player adventure except that it handles death a little differently; instead of reloading you last save and losing your progress, it allows your friends to resurrect you at save points throughout the game. Brilliantly done.

So, after all this, what makes COF so special? Isn't it still just a repetitive dungeon crawl with character upgrades to manage, attribute points to distribute, monster after monster to kill (although using some strategy), items to collect and discard, quest to complete, leveling up to attend to and always one more dungeon level to descend to? Absolutely. And if that whets your appetite you owe it to yourself to try COF. Fans of BG will feel right at home and new players to the genre can find no better introduction. COF is intuitive, beautiful to look at, addictive and always fun. It may a slightly older title but even by today's standards, I've yet to play a more engaging dungeon adventure.