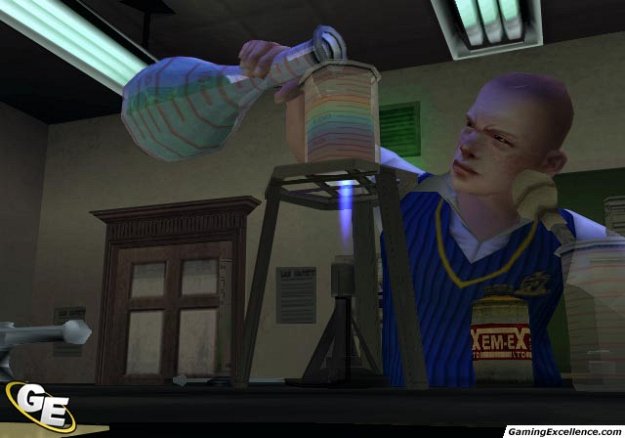 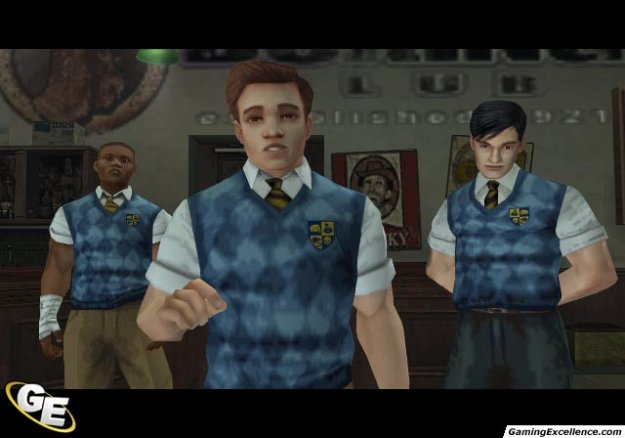 "Welcome to Bullworth Academy! Here you'll be receiving tutelage from some of the finest teachers in the country (that we could afford), rubbing shoulders with some of the best and brightest (that haven't run away or been grabbed up by the other schools), and interacting with the prestigious locals of the nearby town. Keep your nose clean, stay out of trouble, and I'm sure we'll get along just fine."

Bully places you in the beaten-down shoes of James Hopkins, a new student at the school of Bullworth Academy. You've been dropped off as your mother and her new rich husband go on a year long boat cruise, and it's up to you to survive the year, and maybe get a little out of it too.

The gameplay is fairly free-form. You're given a run of the school campus and, when you've progressed enough into the story, the surrounding town as well. If you've played the Grand Theft Auto series, this will seem fairly familiar to you. In the world around you'll find a variety of things to do and trust me, there is a fair number and variety of tasks to accomplish.

First, obviously, you can just progress with the story. This involves going to the many missions scattered around the map. A brief cutscene will describe the situation and what you're to do about it, and then the mission begins. These missions are quite varied in both the objectives and the scope, and might range anywhere from escorting a nerd to the boys dormitory to taking a girl out on a date or to photographing a cheating couple. So, it will be a while before you're justified in saying "This seems exactly the other missions!"

The story and presentation of the game is excellent. The game's dialogue is very well written and humorous, and it is acted just as well. Rockstar seems to have the exceptional talent of showing the worst traits of all characters, and even creating an antihero that the audience can root for. Top notch, as always.

An additional interesting fact about the main story objectives is how completing them progresses the year. Though most games are often stuck in a permanent state of locked time (you know, where the trees are always green, the snow never falls), as you complete the main objectives, time will pass, things like Halloween will come along, and before long you'll be picking up snowballs and hurling them at bystanders.

The main objectives aren't all there is to the gameplay, though. First, there are a slew of optional missions for you to complete for various reasons. You can unlock new saving and sleeping locations, win competitions, or hunt around the area for various collectibles. There're so many things to do in this game that the majority of your time will be spent doing side missions like odd jobs for cash or biking/skating around the map. Still, probably the most interesting departure from the standard sandbox formula is that of your classes.

See, in case you've forgotten, you're going to school at Bullworth. And that means going to classes. Time passes in the world, and when you hear the bell ring, it means it's time to head to your next class. Be too late and you'll be marked as a truant, and the law enforcement (whether it's the school prefects or the local police force) will take you down if they see you.

But the classes are not just a weak mechanic to get you to return to school every now and then. Each of the classes you take will have you play a small mini-game (Chemistry, for example, gets you to press a series of buttons as they pass a small window, and Photography will have you taking pictures of various objects around the school and town) in order to pass it. Once you do, you'll unlock a new ability, whether it's the ability to kiss girls for health, or the ability to make prank weapons with your own chemistry set. These classes add a lot of fun to the game, and a new element of choice. While you could completely ignore them (and avoid the law at the same time), the benefits of passing the classes are obvious. The question you'll have to ask yourself is whether or not you want to run across the town to get to your next period.

Time plays an important role in when some missions are available, as well as when you need to hit the hay. Stay up too long running around the town, and not only will you get in trouble for dodging the school curfew, but you'll find yourself moving sluggishly, everything becoming blurry, and before you know it you'll have collapsed from exhaustion. And when you wake up you might just find that someone has been rifling through your wallet in the meantime.

The fighting system is also much deeper than one might expect from this game. In a game called Bully, fighting is obviously important, and while it's possible to make people collapse using fireworks, your slingshot, or other mischievous toys, it's the fisticuffs that determine winners. When you start the game you'll have a bare retinue of moves and simple combos to execute on those who would seek to bully and push you around, but if you go to gym class or visit the crazy old hobo behind the school, you might learn yourself a move or two. Eventually your list of combos and attacks can grow to the point where you can easily take out large groups of enemies. If you prefer something else, however, you can take advantage of the multitude of debris lying around and use it as a weapon; whether it's a bat, frisbee, textbook, or almost anything else that's nearby.

One of the biggest problems with combat, however, is the targeting system. Targeting is a simple matter of pressing a button, which will lock onto an enemy to attack. The problem is that this doesn't just lock onto enemies. It might lock onto someone you're trying to protect. When you're in the middle of a chaotic melee, it's hard to see exactly where your targeting circle is located, and it's just as easy to take down an ally as an enemy. Since the game arbitrarily assigns your target depending on where the camera is looking, it can be an irritating process to find someone to attack before you attack yourself.

In general Bully is quite fun to play. There are a few control problems and loading times can sometimes be a pain, but otherwise it's just an enjoyable game. Despite all the negative press, the game still deserves its T rating, as there's nary an f-bomb or a sign of real weapon violence (guns, etc). This one hits right on the dot, and is a must have for any fan of the GTA series.