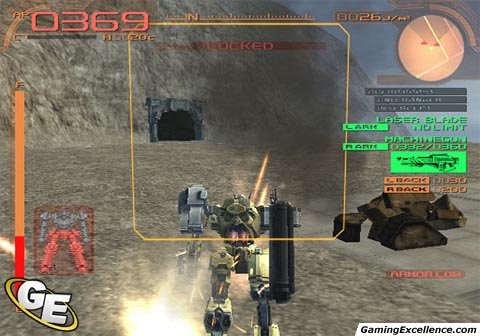 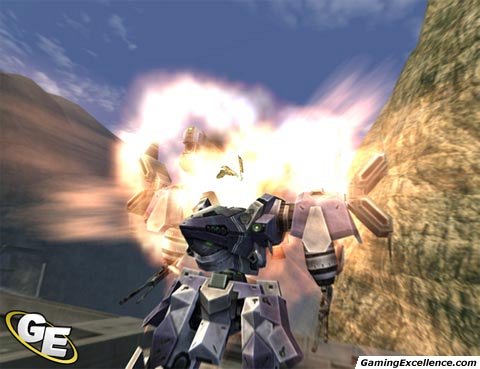 Ever since the days of the original PlayStation, the Armored Core series has been the perfect outlet for fans of robot battles. It borrows a lot from the Japanese anime culture and lets players everywhere live out their fantasy of piloting a giant robot. The series tries to emulate the feel of piloting a giant mech and trades fast-paced Gundam-style action for a more realistic approach. This kind of mech battle system struck a chord with fans everywhere and it's only natural that From Software would churn out yet another sequel. Titled Last Raven, the latest Armored Core game pushes the Raven story forward in the last appearance of the series on the PS2.

Last Raven's story involves two main factions who are at war with each other. One of these factions is made up of three of the greatest companies on earth and it is called the Alliance. Its goal is to dominate the remaining Armored Core pilots called "Ravens" and just about everyone else. Meanwhile, a well-known Raven named "Jack-O" has created a faction called Vertex whose objective is to create a Utopia for Ravens. Players are then thrown into the middle of this feud and are forced to choose sides or do the dirty work of the highest bidder. Depending on the path taken, multiple missions and endings become available. The path itself also determines the identity of the final bosses; taking a particular one may make the game easier to complete than others. The game also has minor independent factions that may give you missions, but depending on whether or not you actually agree to take them, these may be wiped out at a certain point. Another feature is that players get mail from particular clients or other Ravens during the course of the story; unfortunately most of these e-mails are useless and it's up to you to decide whether to read them or not.

Although the story may not be Last Raven's strongest point, it is not the real reason for fans to buy this game. What Armored Core does offer is plenty of customization for your mechs. Every part of the mech, from head to legs, core, boosters, and weapons, can be replaced with different parts from the get-go. The game actually gives the player a few credits at the beginning to buy some new parts before the first mission. Every part costs credits and players can sell their current parts in order to help in purchasing new ones. There are also hidden parts around levels that must be found before they can be equipped, which are free of charge provided that you spend the time required to find them. Once you actually acquire your favorite part, there's also a tuning function that allows players to tweak the parts in various ways such as weight, energy consumption and others, depending on which part is being tampered with.

The parts themselves are actually divided into categories but the game makes very little attempt to explain all of them. These include light parts for fast movement and heavy parts for higher health. On top of this, the robots can also be changed from bipeds to other variations, allowing players to change the standard two legs of the mech to tank bases, rocket-based levitating bases and others. Players also get a multitude of weapons that are either energy-based or utilize normal ammo. These include back mounted rockets, energy cannons, machine guns, pistols, sniper rifles, missile intercept beams and various other weapons. If that wasn't enough, certain mech configurations allow you to have extra weapons inside the core and use the "hangar utility" to drop weapons and switch to a hidden pistol. Dropping other weapons that have run out of ammo reduces weight making your mech move faster. The game goes even as far as giving you the choice to equip dedicated radar in the back of the mech, or having built in radar inside the mech's head. That of course may increase weight, energy consumption, and price for the head. The level of detail players have to cope with to make a decent robot is almost overwhelming and Last Raven is certainly no walk in the park.

So how exactly do you play this rather daunting game? Well, there are two control schemes. One of these allows players to move with the left analog stick and look with the right analog stick much like a first person shooter. The other is made for Armored Core veterans and preserves a rather clunky control scheme that makes players look up or down with the L2 and R2 buttons while strafing with L1 and R1 and moving with the D-Pad. Either of these schemes is extremely difficult to master as the mech relies a lot on using the boosters at the right time. And, given the difficulty of some of the enemies in this game, players will have to spend several hours in the training room just to master the control scheme of their choice. Once that's done, the next step is to learn how to deal with the energy bar and overheating concepts. These revolve around the fact that the mechs have generators and a radiator to produce energy and dissipate heat respectively. As players use boosters or energy-based weapons, the energy bar will decrease but will increase again depending on the generator's power. The radiator plays the part of sustaining weapon damage since a couple of hits from an enemy with a mech with a poor radiator may cause overheating and rapid health loss. Because of the fact that mechs are extremely slow to turn and move without using the boosters, the energy bar becomes a fairly annoying aspect in the beginning of the game.

Last Raven forces players to complete missions and acquire credits for better parts from the outset of this adventure. Depending on how well the mission is completed, the player may receive a higher ranking for the mission. But a big part about missions is making sure to limit damage as much as possible and conserve ammo. At the end of every mission, players have to pay to repair damage, and that can take out a big part of the paycheck. Missions are not the only way to earn money however, and there's also a betting system in "Arena mode" which consists of a group of ranked players that you have to defeat in order to get a higher ranking. To actually challenge one of them, you have to bet a specific amount of money. By beating the opponent, the player gets the pot and walks out with twice the money. Losing to the opponent will have no consequence in repair damage or game over status but will take your money away. Given the amount of difficulty of even the lower ranked arena characters, beginners are usually forced to do plenty of missions before figuring out the best setup to defeat a particular opponent. Progression in the arena will not only give players more money, but will also give them exclusive parts with exceptional functionality.

So is this game actually worth your hard earned cash? The answer is maybe. Last Raven is not friendly at all to newcomers and does very little to actually teach players how to pilot mechs effectively. And, even after hours of frustration and furious customization, the game doesn't feature a tremendously rewarding experience. There is versus mode which can add a bit of replay value, but you'll have to acquire several parts in the game before having access to them in versus. That is provided that your friends will actually want to play this game with you. This is a complete mech simulation and that means it does not even compare to games like Zone of the Enders when it comes to control mechanics. The robots move at an extremely slow pace and are pretty much sitting ducks if the player runs out of energy while using boost and weapons. The only reason why I actually enjoyed Last Raven is because I'm an Armored Core veteran and was excited about the prospect of experimenting with new parts. Unless players are willing to put several hours into a complicated control scheme, only to enjoy average playability at the end, they should probably look elsewhere. But if the prospect of hours of robot customization and realistic mechanics is what you're looking for, then Last Raven is certainly worth a look.