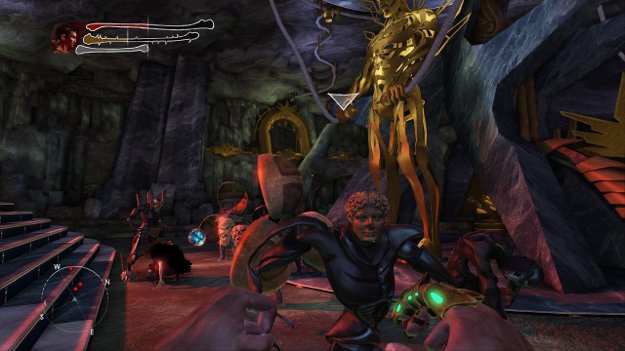 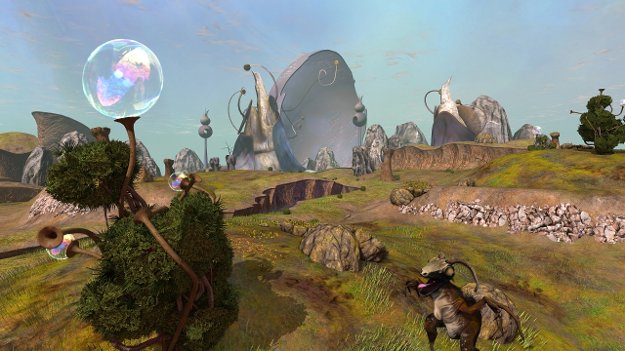 Zeno Clash II returns you to the world of Zenozoic once again to fight your way through hordes of creatures as Ghat, the once-exiled child of the bizarre creature known as FatherMother. The game's focus on first-person melee combat was something of a novel concept that hasn't been explored very much, but it's expanded in Zeno Clash II - though not as much as it could've been.

The game's plot, which takes place a little while after the first Zeno Clash, involves Ghat's resistance to the Golem, who has been trying to introduce civilization to the residents of Zenozoic. From there, things get grander and grander in scope, as questions about the world they live in, the Golem that polices it, and what lies beyond. It's interesting, and though it certainly drags in various locations, it kept me going until the end of the game. Just make sure you play the game's predecessor though, or you'll be completely and utterly lost in the surreal story and location.

The combat is largely unchanged, which means good and bad things for the game. It's still got the basic first-person punching combat that made the first stand out, but there aren't a lot of changes made to it. The biggest addition is that of a power meter that allows you to make a few hard-hitting attacks that can often mean the difference in a tough battle. Also new to the game are a few secondary weapons - though except for one that allows you to link two enemies together (so that they share damage), they aren't terribly useful and are underused for the most part.

One big problem with the combat is that is still remains focused on elements like countering and dodging a single opponent. This was fine for the first game, since you often fought battles against a small number of opponents, but its sequel takes things up a notch, often facing you against up to six other enemies. It's hard to focus on one enemy when four or five are surrounding you - and if the game had some sort of way to effectively deal with multiple enemies, this wouldn't be a problem. In addition, there are a distinct lack of combos for you to pull off - which means you'll be often punching the enemies the same way for a lot of the game.

It's not just the plot that shows a rise of ambition in Zeno Clash II - gone are the tightly-constrained, linear corridors of the first title. Instead, you'll be running Ghat through open hub-styled areas, with impressive vistas and scenery to take in (the graphics are very much improved from the first game) as well as a wide variety of new enemies to fight. That said, the game does falter in this area, with a bit too much backtracking to deal with, as well as a distinct lack of real incentive to explore down side paths and dark tunnels. There are weapons to find, though these break easily, as well as items to recover your  health and power attacks. More important are the totems that give you skill points, which make up the extent of the game's RPG mechanics and allow you to raise your strength, health, stamina, or leadership. 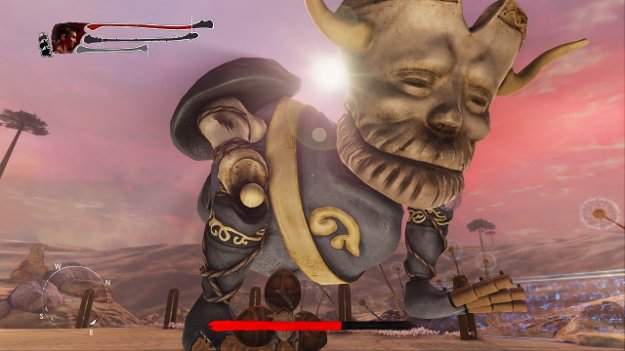 Speaking of leadership, a brief mention here for the allies that you can recruit during the course of the game. You can only have one at a time (though Rimat, Ghat's sister, follows him as well), and you require a high-enough leadership to recruit them. Unfortunately, like many areas of the game, this feature isn't pulled off particularly well, as your allies tend to be...well, pretty dumb. At best they can distract a few of your opponents, letting you focus on a couple at a time, but for the most part they often just get in the way.

The game's biggest draw is certainly it's style. Surreal design permeates the entire game, whether you're looking at the characters, the landscapes, or even the weaponry. It's also got a sense of scale that I don't often see in games, with huge, alien structures and viewpoints that let you see across miles and miles of the world. More than once I took a moment to just stare at the world around me, unlike any I had seen before.

Zeno Clash II is a good definition of a sequel - it builds upon its predecessor while keeping the core of the game intact. Unfortunately, in a few ways the game's ambition gets the better of it, making some of the gameplay fall flat. But for fans of the first game being able to got through the world of Zenozoic again, punching the hell out of all its inhabitants, is worth the price of admission, even with the game's flaws.