You Are Empty (PC) 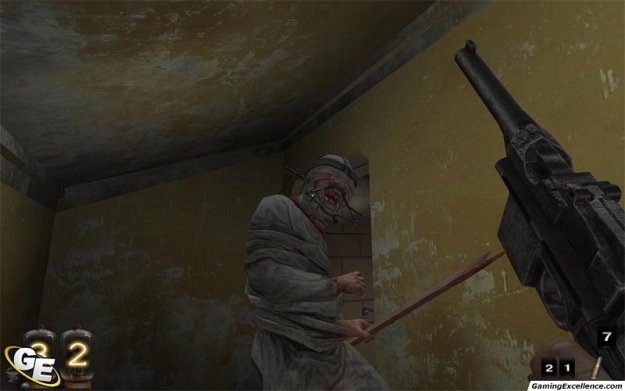 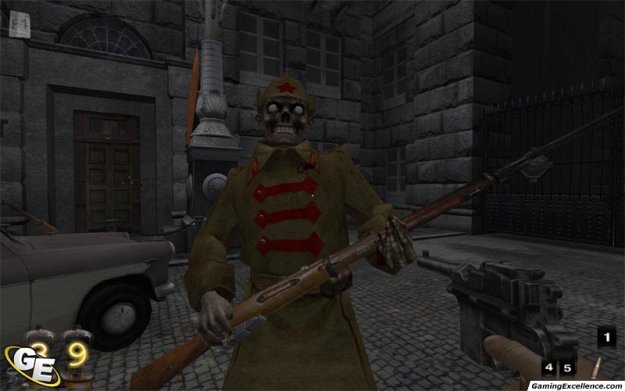 Hello there readers, it's time for a quiz: Which of the following was not present in Soviet-era Russia? Was it A) Russians, B) Communism, or C) Bloodthirsty mutants who want nothing more than to tear you apart? If you guessed C, then you may have figured out what's offered in the PC shooter You Are Empty, which takes place in the totalitarian Soviet Union.

The story begins with a premise straight from the annals of FPS cliches: the player, an ordinary guy, is walking along his ordinary life, when a truck suddenly hits him. Quite abruptly, his life stops being ordinary as he wakes up in a hospital where everyone is missing, dead, or trying to make him join the ones who are already dead. As your nameless character makes his way through the area, it becomes quite apparent that something has gone quite, if not terribly, wrong.

Another story is told through cutscenes interspersed sparsely between levels, and what they lack in dialogue is more than made up in style and eeriness. They tell the tale of a Russian man whose relevance to the story is not noticeable at first, but his role is a grim one indeed. The animation is like something filmed from the era: scratchy and grey, with actual footage from the era spliced in for effect. The effect is unsettling and unnatural, and succeeds in adding to the atmosphere of the game.

In terms of gameplay, You Are Empty does poorly. The problems are broad, and hard to define explicitly, but they nag at you while you play, creating a heavy drag on the enjoyability of the title. For one, you character walks incredibly slowly. Whether or not this was an intentional choice by the developers, it makes the simple act of walking from place to place a chore. Other gameplay elements feel pretty dated. The entire game is composed of walking from point A to point B, finding a key to unlock door C, and proceeding through to level D. There are no puzzles to speak of, no deviations from this formula, and no real twists to the game (except near the end). This actually manages to take away from the plot, since it seems to be forgotten as you mindlessly meander from locale to locale, to many destinations that seemingly have no purpose. Things feel repetitive and dull, and there's nothing to break this up.

There is variety in the style of weaponry, but not necessarily in what they do. There's the simple Mauser pistol, the Mosin rifle, a PPSH machine gun, and even an electrical gun that spews bursts of electricity. The AI of the enemies is just as simple, with behaviours ranging from charging at you mindlessly while firing, to waiting at a specific point and not moving at all. The AI's pathfinding ability can be especially poor sometimes, resulting in enemies moving around in circles, unsure of how to reach you. Things tend to become easy when this happens.

The game offers up some real difficulty, but not the fun kind where you think: "Okay, so if I flank this enemy it won't see me coming". It's more in the realm of "damn rats, stop jumping all over the damn place like Mexican jumping beans on speed and let me shoot you already." And this is not fun. Neither is the need to replay a good twenty minutes of content because the game does not autosave more than once every twenty minutes and has very clumsy (and fatal) ladder mechanics. I can assure you, liberal use of the quick save option was implemented after this.

The game does excel in producing a creepy, stalwart atmosphere in the locations you jaunt through. The Iron Curtain-esque feeling is produced quite well via a combination of colors, designs, music, and even propaganda posters. It does feel very much like 50s-era Russia, or at least what it would feel like if something had gone seriously wrong during it. This feeling is compounded by the various letters and memos you find scattered around the locations you visit. They're not much, but they give the feeling that the incident that occurred did not happen all at once, and instead grew slowly in magnitude until it overwhelmed and destroyed nearly everyone. It's hard to describe, or even show in pictures, but there's something overwhelming about walking through a city square, surrounded on all sides by tall, oppressively gray buildings, sounds echoing around you are from various parts of the city, while the stalwart statue of Lenin looms above you.

Speaking of the audio, it's really quite hit or miss. The music is excellent, and succeeds in its scarcity. It comes in when large action scenes begin, and really works to get your heart going. One track in particular involves segueing between hard rock music and Russian vocal choir, and sounds just excellent. Likewise, there are sounds that reach you as you run through the city, cries that sound quite unnatural as they bounce off the buildings around you and serve to heighten the tension.

On the other side of the coin, however, is the voice acting. You don't speak to a whole lot of people (exactly four) who have enough wits to speak, but when they do, you'll wish they were dead already. There's no lip syncing to speak of, and sometimes they will finish their talking animation while the sound continues to emanate from your speakers. And that sound is not pleasant but rather some awful voice acting that sounds at best bearable, and at worst terrible.

The graphics don't serve to please the eye; that much is certain. Many of the visuals look dated, especially the enemy models. The lack of any real color, though useful to maintain the atmosphere, doesn't help the visuals much. The worst of it is the character animation: they stutter often, look unnatural, and detract heavily from the overall look. This is not limited to the enemies, however, as transportation elements such as elevators and trams will stutter forwards instead of smoothly moving, creating a very unpleasant visual experience.

The single player experience isn't quite worth the price of the game, which is unfortunate because there's no multiplayer available. The game isn't overly long, but it's a lot longer than most first-person shooters on the market. Once the game is finished, there's nothing left to do. The climax is interesting to discover, but that's all there is to the game, and due to its slow pace, it's not really something that's fun to play over again.

You Are Empty fails to really bring anything new to the table, but it does bring a unique setting and a creepy atmosphere. Where it falls flat, however, is the most important part of any game: its gameplay and its ability to be replayed. It's a dull experience with unpleasant graphics and large amounts of repetition. Though the visual style is moody and atmospheric, that's just nowhere near enough to make the game enjoyable to play.