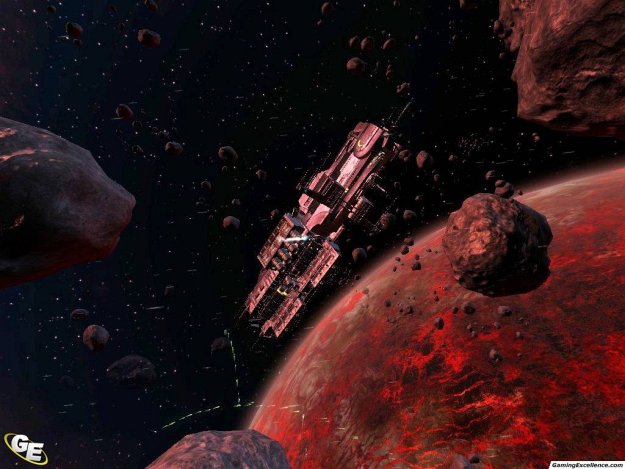 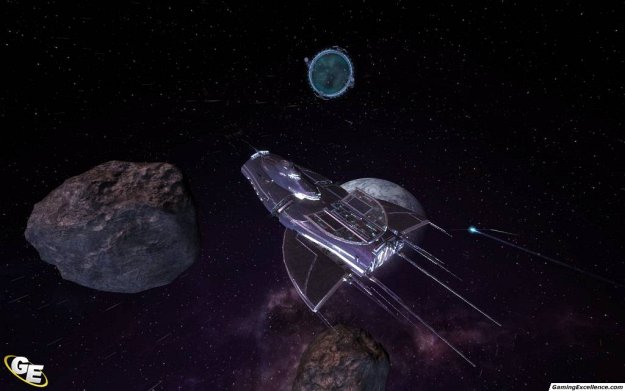 The X series is one that will polarize a lot of gamers. On one hand, it's an incredibly intricate space simulator that'll eat up days of time. On the other hand, it's maddeningly obtuse and user-unfriendly, with a user interface that'll make you want to quit just by viewing it, and gameplay that fades into 'dull' category often, especially when you don't know what you're doing.

Terran Conflict attempts to solve a lot of the problems that have plagued the series. The first thing that anyone accustomed to the series will notice is the completely revamped interface and controls. Now things are no longer arbitrarily mapped to keyboard buttons, they're now accessible from a easy-to-access menu. There are still keyboard shortcuts, but now it's not a matter of memorizing everything from 'Match enemy speed' to 'Display best trades in sector'.

The gameplay of Terran Conflict is divided between two portions: combat and trade. Combat is, well, combat. You zip around and shoot stuff. Terran Conflict shows what some truly epic space battles can be: frigates hundreds of times the size of your ship fire lasers around swarms of small ships buzzing around as you struggle to avoid fire, both of your allies and your enemies. Alternatively, if your ship is too slow you can also be facing some of the dullest combat imaginable, with your enemy simply pacing back and forth across you as you struggle to get a few shots in.

The other portion of the game, the ability to trade, is probably one of the most fleshed-out economic simulators in any space-sim. Of course, you have the standard economy of buying low and selling high. However, it's also dynamic, meaning if you continue this long enough, prices will fluctuate. But that's not all. If you take the time to earn the cash, you can actually purchase the stations that produce and sell equipment and materials throughout the galaxy. Essentially, you can set yourself up as part of the economic system. If you notice a station that produces energy, and a station that produces weaponry close together, but no other stations to fill the gap (using the energy to make equipment that then goes into the weaponry, for example), you can bring in your own station to fill in that gap, making you a tidy profit. The scope is pretty impressive, but it's not going to appeal to everyone.

There are also missions for you to embark on. Terran Conflict has made finding missions of all kinds much, much easier than previous X games. Before, you were forced to go to a station and manually search for missions by talking to people docked at the station, hoping that one would show up eventually for you to take. In Terran Conflict, however, those ships with missions for you are noticeably highlighted on your sector map, even if they're docked at a station, meaning you can simple open up a channel with them and take the job without any hassle.

Now that would be less of a problem if the missions were fun. When you start, many of the missions are simply not possible to complete, either with incredibly hard time restrictions or your ship lacking the necessary equipment to complete them. Shipping ore, for example, requires a massive hold that beginning ships do not have, but missions for delivering this rocky substance are still given.

Despite being a standalone expansion of a game that's a few years old, Terran Conflict still looks really good. For whatever reason though, even on some good systems, the highest settings will slow things down to a near-unplayable state. Even at medium, the game looks pretty good though. This does not count the pictures of pilots, however, who still look like they're made out of clay. The voice acting, while improved slightly, isn't much better than sub-par. Good music though.

If you actually want a story in Terran Conflict (there's really no point to it), there are numerous campaigns for you to follow, beginning with the relatively easy and going to the difficulty territory of bankrupt assassin. Beat some of these campaigns, and you unlock more. The stories are generally really dull and except for the fact that you get some equipment to start the game with, they aren't worth the trouble. Otherwise you start out with a rinky-dinky ship, basic weaponry, and not much else.

Overall, Terran Conflict fixes a lot of problems with X3: Reunion. One of the biggest turn offs in the game was the terrible interface and poor controls, but they've been fixed in this stand-alone expansion. Other problems, like lacklustre storylines, poor voice acting, and a very steep learning curve still persist, but the game is still playable through these. Simply put, X3: Terran Conflict is one of the most in-depth space-sims released yet, and if you've got a hankering for the genre, you can't get much better than this.