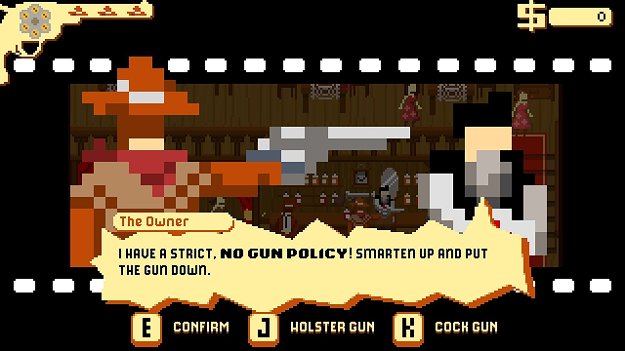 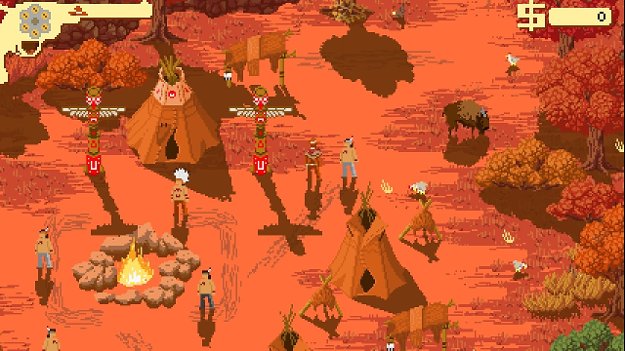 Video games today tend to cozy up to nostalgia to get players to take notice of them. However, it’s rare for a game to grasp it from two different forms of media and do it so well. That is what Ostrich Banditos has crafted with Westerado: Double Barreled.

The aesthetics of Double Barreled are great. The 8-bit style graphics looks like something that came from the era of an Atari-2600 and the homage of a spaghetti western is displayed prominently throughout your entire adventure. The desert color palette is rather limited, but refrains from just sticking with a high intensity yellow shade, but also throws in dull browns and reds to differentiate towns and other desert settings. Coupled together with a soundtrack filled with harmonica blows and guitar twangs, Double Barreled nails the entire feel of a Clint Eastwood movie right down to the switch to letterbox framing when a gunfight breaks out. The sound design of it is also great. The click of a revolver's hammer as you cock it, the pop as your fire it; it is all there and it adds so much to the atmosphere.

Double Barreled combines a Wild West movie with the mechanics of Guess Who in storytelling. You start off with a mother and brother, who are quickly killed and your farm burned down after you spend a day trying to wrangle a buffalo. Your first clue as to the identity of the murderer comes from your dying brother. From there you must gather clues from folks you help around the game until you figure out the identity of him. Perhaps a great mechanic to go along with this is that you, at any time, can accuse someone of the deed as well as draw your gun during any conversation that can lead to some interesting outcomes. In one such occasion, I decided to pull out my piece in a saloon and the ladies upstairs were quick to pull out their shotguns while the piano player just continued playing without a care in the world.

Even with its 8-bit look, Double Barreled nails modern day gameplay mechanics with its open world setting. The game stays away from telling a linear story and lets a player do anything you want to an amusing degree. Sure you can spend all your time helping citizens and shooting bandits, but you can also just as easily kill the gun seller (a really bad idea) or rob the bank if it is your fancy. There is just so much to do in this Wild West setting. I spent a good chunk of my time hunting down wanted men bringing them into the sheriff’s office or leaving them dead in the streets. Even after searching from screen to screen for the right person with the correct set of clothes on, I found myself stumbling onto new areas with even more quests to undertake.

But as open as Double Barreled is, it can be over pretty quickly if you are not careful. Nearly every quest that you take gives you a clue to the identity of the murderer of your family. Looking at my progress, I had uncovered about 98% of the world in less than an hour, yet there were still other areas of world to discover (such as the mines) before I solidly pegged down the full profile of the murderer. There was more I wanted to do and explore, but I felt I owed it to my dead family to get the vengeance they deserved. Thankfully, with each time you play, the murderer's identity is randomized warranting secondary playthroughs, which can allow you to do more quests, hunt more wanted outlaws or just go crazy and become an outlaw yourself in the Wild West. There are even unlockable characters to play as which can switch up your playstyle drastically.

Aside from the story, the combat is pretty intense. Limiting shooting to just the horizontal plane mixes a feeling of both timing and placement. Keeping with its western style, combat involves a four-step process of drawing your gun, cocking back the hammer, firing and reload each chamber when empty. The standard revolver is a good choice, but don't shy away from other weapons such as the shotgun or dual revolvers to match with the style of combat you are comfortable with. Each weapon has its own unique strength to it such as the long rifle which can take out multiple targets at once if they are in a straight line or the dual revolvers that can be set to fire in opposite directions. Double Barreled has a weapon for each situation and allows you to switch on the fly to best fit for each combat scenario.

Westerado: Double Barreled is a great mix of old school western movie storytelling, pixel graphics and open world gameplay. The combat is very involved and just begs you to engage in it with every conversation. The main storyline can be completed rather quickly, but offers up players the choice of multiple playthroughs in a world that is filled with a multitude of side quests and playstyles to undertake from the straight-forward hero quests to the chaotic renegade. Ostrich Banditos has indeed crafted a title worth your time.