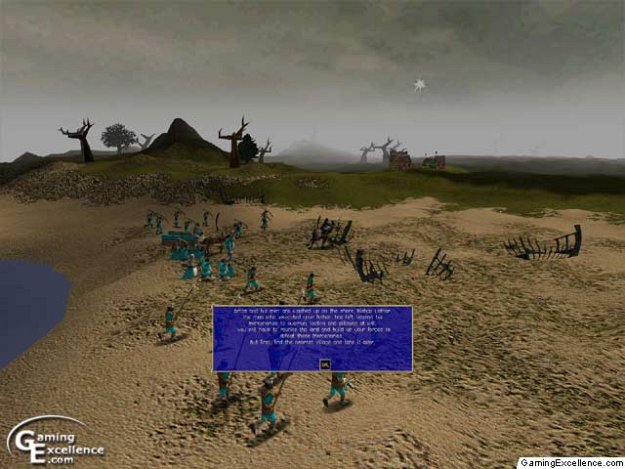 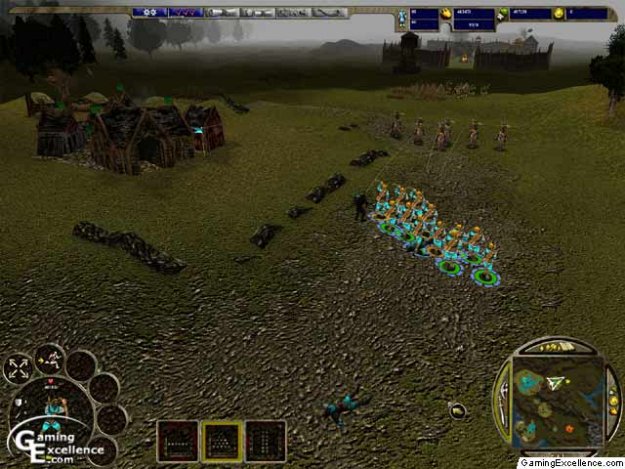 Warrior Kings has been long anticipated by strategy fans worldwide, with authentic real-time strategy gameplay and a new approach on the genre. Unexpectedly, this game has received mixed reactions from gaming fans, some who enjoy the title and others that do not. I like to consider myself in the first of the two categories.

Published by Microids and developed by a small development studio called Black Cactus, Warrior Kings is an epic real-time strategy title that is unlike any other produced to date. Warrior Kings puts players into the role of Artos, the exiled heir to his dead father's throne. Fleeing is the only escape at the time, to build up forces and eventually take back what is rightfully his. With a somewhat dynamic storyline, the ability to make choices that affect the outcome of the game, and the ability to select a path in which to pursue, players will derive many hours of entertainment out of Warrior Kings.

The primary element in Warrior Kings is the massive campaign mode. Players start off with a few units and a small amount of resources, advancing through a complex and entertaining campaign with a very lengthy playtime. Unfortunately the game does not include a "random map generator" or "skirmish mode" in any form, so you are forced to play the through the campaign or head online for a multiplayer game. Multiplayer for up to eight players is available via local area network or the GameSpy Arcade matchmaking software included on the CD. The multiplayer options are very wide in variety and will often provide more entertainment then progressing through the campaign.

Warrior Kings is unique in several aspects, most notably the gameplay. Using a three dimensional engine, players can rotate, zoom, and pan the camera around the action. Unfortunately these abilities are not without their setbacks. Complexity and "clumsiness" are two problems, as navigating the terrain can be very confusing with the perspective constantly changing. Other than these issues, the overall gameplay is generally well done. Unit balancing is very well developed, a good example being the offensive advantage to higher ground when attacking or defending. Player movement is fairly sound, and controls are suitable for this type of game. For anyone used to strategy titles like Empire Earth or Age of Empires, the control scheme is completely different and will take some getting used to. Many players will find Warrior Kings too complex, as the three-dimensional engine can be very difficult to master, and the game is not as easy to step into as most real-time strategy titles. The developers of Warrior Kings have taken a whole new approach in the real-time strategy genre, and have succeeded in many respects, but some features would be better toned down in terms of playability for the occasional gamer.

Units play a crucial role in the development of a successful strategy title, and Warrior Kings offers much to please any strategy gamer. The game consists of three completely different technology paths players can follow, Imperial, Pagan, and Renaissance. Each path will lead the game in a different direction, with completely different units and a different approach at gameplay. Ninety-four different types of units are included, each with different offensive and defensive capabilities. Unit formations also become very important, as each formation offers a different balance of offensive, defensive, and movement abilities. Along with the formations, unit experience can play a critical role in the success of an attack, the more experienced a unit the better they will perform. This aspect of the title is generally well balanced, and offers much to any strategy gamer.

As with most real-time strategy games, players are responsible for constructing buildings and maintaining an economic balance. Peasants take care of these tasks, and their success will greatly affect the strength of your military forces. Overall, these techniques are well balanced, with resource collection being a prime aspect of the title. Food and wood are readily available for collection, but it is this collection that takes much time to complete. Throughout the campaign, players will be required to spare materials or food for another city in need, often in exchange for technology or new skills and weapons.

Graphical capabilities are a key aspect of any real-time strategy title, and Warrior Kings does this fair respect. As mentioned earlier, the terrain can be zoomed in upon, and even on the closest zoom levels, each unit and object remains well detailed, with only minor pixelation. Textures and rendered objects are near perfect, with the exception of several clipping issues. On many occasions, units are seen passing through each other and other units, which can lead to a few problems. Along with the clipping issues, the game is very resource intensive and will require a powerful system to run the graphics to their full potential.

The artificial intelligence model is a crucial part of the offline campaign mode, and this can make or break a title when it is primarily directed at offline gameplay. Warrior Kings features a solid AI model, nothing overly spectacular, but it is suitable for a game of this type. Computer controlled opponents behave in a very skilled manner, and can often be very difficult to defeat without a strategy in place. The AI model is generally well developed, but the path finding for both player and computer controlled units is a problem. Often, especially during combat, units will not understand the terrain they are approaching and not reach their destination, or take an extremely long route when a shorter path is clearly available. Often, units will be found off course and wandering when they are supposed to be battling an enemy, and this can cause a problem in the heat of battle. These AI issues could be cleared up in a patch, and hopefully they are not overlooked when an updated patch is released.

Sound is without a doubt the best aspect of Warrior Kings. An absolutely beautiful musical array combined with a humorous and well-rounded variety of sound effects is brilliant. The musical aspect of the title is very suitable for the time period presented, and a variety of composed themes are presented adding both enjoyment and atmosphere to the title. The sound effects in Warrior Kings are exceptional as well; often peasants and soldiers will reply with a sarcastic comment when asked to complete a task, most comments taking on a humorous nature. On more than one occasion I found myself pausing the title to get a good laugh at the response of a peasant, and this really lightens up the atmosphere making the title somewhat more entertaining. However, the sound isn't perfect, as it may not work correctly on some systems without some troubleshooting. Although the issues with the older SoundBlaster line of cards has been corrected in the newest patch, some users may experience problems if an onboard sound card is present or more than one sound card driver is installed in the system. Other then these technical issues, the sound effects and musical score in Warrior Kings is second to none.

Overall, Warrior Kings is a solid addition to the real-time strategy genre of games. With a completely new approach on gameplay and a massive single player campaign, players will derive many hours of entertainment out of Warrior Kings. Several issues including the unit path finding and graphical clipping issues can cause some problems, and the sheer complexity of the game can be overwhelming, but any strategy gamer should enjoy Warrior Kings to the last minute.