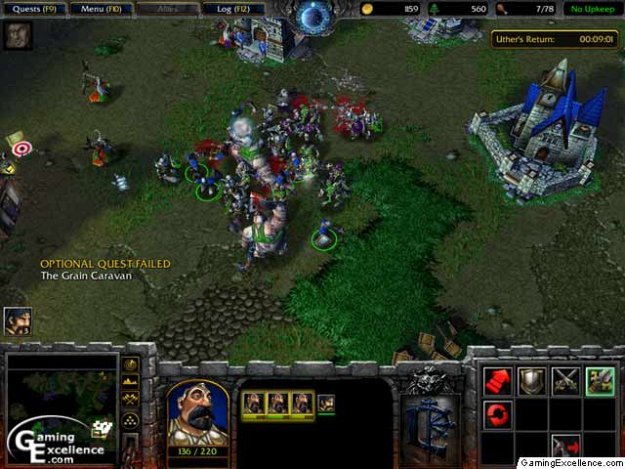 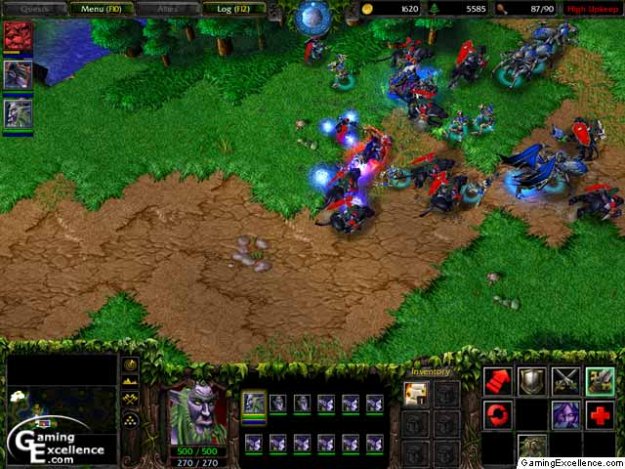 It seems like an eternity ago that Warcraft III was officially announced, Blizzard had once again shocked the world and their legion of dedicated and loyal supporters. Another Warcraft game seemed like a brilliant idea at the time, and this has sure proven true for Blizzard. In a short period of time Warcraft III has become the fastest selling PC game of all time, and if this doesn't say something about the popularity and entertainment value of Blizzard products, nothing will.

The Warcraft series has been around for about ten or so years, and is without a doubt one of the most popular franchises in the business. Blizzard is a world-renowned company to their many fans, always taking the time to finely tune and present each title, and this is what keeps them on top. Other popular Blizzard series' include Starcraft and Diablo, not to forget their upcoming massively multiplayer title World of Warcraft.

Warcraft III: Reign of Chaos begins with one of the most notable qualities of all Blizzard titles, the introduction and in game cut scenes. The opening video not only sets a standard of what to expect in the game, it's beautifully rendered videos set the standards in this area for the entire industry, always have and will for a long time to come. These cut scenes are integrated into the campaign storyline in a flawless manner, and seen throughout the title. Generally, the product is exceptionally well polished, everything from the basic menu system to the in-game command structure. Development may have taken a much longer time than initially expected, but the final results were well worth the wait.

Warcraft III contains four unique races each offering a different series of attributes. The humans are the first of these races, strong-minded, dedicated, yet lacking in some ways. The Undead are the enemy of the humans, a race of soldiers brought back from the dead and originally created by the Burning Legion. As humans die due to the terrible plague unleashed by the Undead, they join the ranks of these ravaged soldiers, a never-ending supply of troops. The Orcs are one of the most popular races in Warcraft III, once at war with the humans an unsettling peace now covers the land. Once a proud and noble race, the Orcs were corrupted by the Burning Legion and sent to invade and destroy the humans fifteen years before. The Night Elves were the first race to awaken in the World of Warcraft, an immortal and highly advanced species. It was the overuse of magic that drew the Burning Legion to the world, and the Elves suffered such unbearable loss that they vowed never to use magic again in fear of the Legion returning. Each of the four races offers a variety of unique units, heroes, and structures, however the balance between each race is well developed as not to give any single race a distinct advantage all the while providing an entertaining and enjoyable experience.

One thing that makes Blizzard titles so popular is the unique approach on single and multiplayer games. The offline campaign progresses through the four races in a continuing storyline with a similar objective; save the world from the Burning Legion. Another tutorial-based mission is also included that is excellent in providing information on the series and teaching beginners how to construct structures as well as some basic combat training. Among this single player campaign, Warcraft III: Reign of Chaos includes a free multiplayer mode for up to sixteen players through Battle.net, Blizzard's online gaming service. With three or four simple clicks, players can be online and ready for combat. The ability to select which settings you prefer and have the game search for an available opponent based on skill and preferences is superb, without a doubt one of the best multiplayer systems seen to date.

Warcraft III is not a standard real-time strategy title; the game contains a variety of elements usually seen in role playing games as well as a variety of other customizations and unique attributes. Spell casting, character advancement, and the ability for characters to learn as the game progresses are all excellent RPG elements combined into Warcraft III. Casting spells plays a vital role in the game during combat, whether it is to revive a struggling soldier or during an attack on a group of enemy units. As heroes become more experienced on the battlefield, their level will increase allowing the ability to learn or upgrade spells and other magical abilities, as well as making them more difficult to defeat. Should a hero be killed in battle, they can be revived in an altar for a specific number of resources. These options and unique aspects of Warcraft III are some of the best features and greatly add to the entertainment value of the title.

Something rarely seen in modern real-time strategy titles is the actual strategic portion of the title. Unlike most other games, Warcraft III has a low unit cap, focusing more on the importance of specific units rather than simply attacking with brute force. Unit measurement is based on food supply, while peasants and other smaller units use a single food point, certain military units and heroes can use up to five each. Unit maximums can be increased by constructing more housing up to a maximum of ninety food points. This low unit cap brings back the strategy in real-time strategy titles and is a unique approach that has paid off for Blizzard in Warcraft III.

Each campaign mission contains a variety of quests in which the player must complete to progress to the next mission. Whether it is simply to defend a town from an enemy invasion, reach a location and stop the enemy, or to construct an outpost and build up an army, Warcraft III contains a wide enough variety to keep players entertained for hours. Many optional quests also arise during play, preventing the spread of the deadly plague or discovering an object or structure are a few that come to mind. This unique approach on the campaign-based model set Warcraft III apart from all other real-time strategy titles, and in many ways improve upon them.

The visual quality of Blizzard titles has always been towards the top of the spectrum, and Warcraft III: Reign of Chaos is no exception. Everything from the environments to the character modeling is of outstanding detail, and the use of textures is superb. Battle sequences are spectacular, the use of spells and the skeleton corpses that remain in reminder of a conflict simply add to this visual detail. The optimization used in the graphics engine is also excellent; Warcraft III operates well on lower-end computer systems although the graphics cannot set at maximum detail levels. The day and night sequences are also a nice touch; the effect they have on units and visibility range is an interesting and well-developed concept. Blizzard scores high in the graphical department for Warcraft III: Reign of Chaos, one look at the title and you will understand why.

Combined with the graphical wonders of Warcraft III, Blizzard Entertainment has also included a solid sound package, everything from the background music to the wide variety of in-game sound effects. The speech of each character as the campaign progresses is well acted and enhances the atmosphere and situation of the character. Generally, the sound effects are interesting and unique enough to avoid becoming repetitive. The theme music is something I thoroughly enjoyed, the understanding of the World of Warcraft expressed through a single song. Blizzard has done a very good job in this department, something that is very difficult to accomplish as many real-time strategy titles do not focus thoroughly enough on the sound aspect of the game.

Warcraft III is a wonderfully polished product and one of Blizzard's best to date. Offering much in the single player campaign as well as a variety of single player offline missions, not to mention the massive multiplayer mode through Battle.net, Warcraft III is a well-rounded and entertaining title. Should players begin to become bored with the predefined maps, the world editor included in the package adds further value to the title, allowing players to customize maps to their specifications and then use them in battle. Any fan of the real-time strategy genre should not miss out on Warcraft III as it's addicting gameplay and sheer entertainment value will keep any player coming back for hours on end.