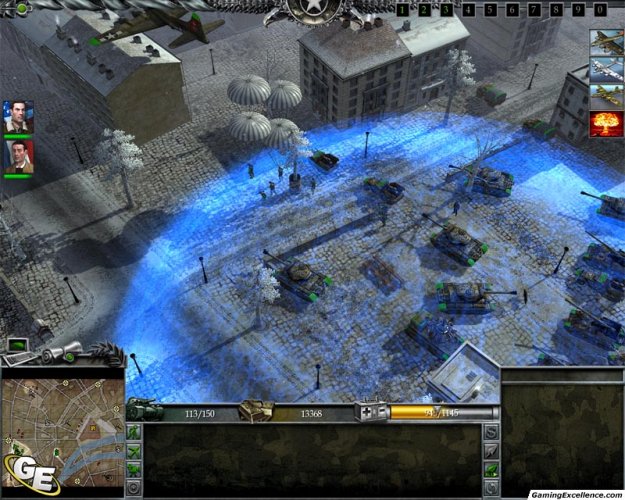 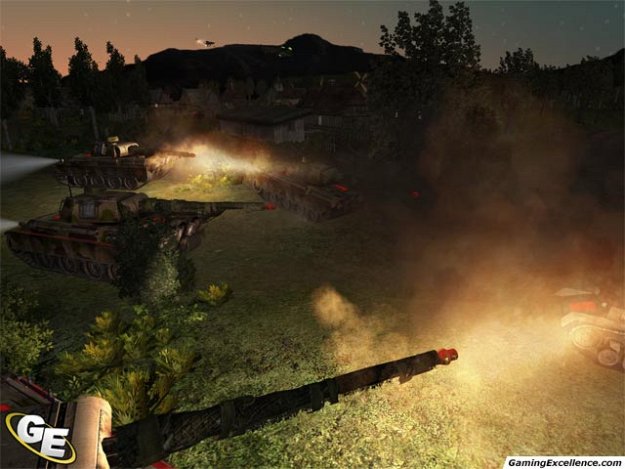 As yet another World War II game shows up on the store shelves, one really starts to look for aspects that will raise a title far above the competition. 10tacle studios and Digital Reality bring us War Front: Turning Point, an otherwise average real-time strategy game that relies on its main premise and storyline to form its shaky pedestal. The premise is simple: "What if... World War II happened this way?" According to the writers, the assassination of the German Leader early in the war could have lead to a very different turn of events, which includes unlikely alliances and unforeseen enemies. War Front's packaging is a bit misleading, with its futuristic depictions of Mech Warriors, flying infantry and giant Zeppelins, in that the setting is still in the past. Though all these units feature in the game, the story is actually probably set somewhere in the mid-fifties and the new feats of engineering presumably stem from heightened war-time efforts combined with a hefty dose of conspiracies. Whatever the reasoning, that's the alternate reality providing the setting for War Front. The real question is whether that's enough to warrant yet another WWII game in an already crowded market.

War Front's single-player campaign is fairly interesting and allows the player to go through the story from two perspectives, the Allies and the Germans. In any other game, these would be opposites, but early on in the campaigns, the parties form an alliance against the even greater threat of communism. Both sides of the story begin with the invasion of London, reach a variety of locations across Europe and Scandinavia, and culminate at the core of the Soviet empire. The missions are composed of primary and secondary objectives, and usually feature one bonus (and sometimes hidden) objective. Most are of the form "destroy building X" or "bring important character Y to location Z," but a combination of excellent storyboard crafting and map design instill more than enough diversity in these otherwise repetitive tasks to generate interest in completing the game. In addition, some objectives require a few attempts and sound tactics for success, so it's not always just a matter of blasting your way through. Unfortunately, portions of the tech tree are released with such granularity that the gameplay evolves painfully slowly from one level to the next. The main shortcoming of the campaign is that the player always starts next to a resource point that contains much more resources than is necessary to complete the level, and so by tasking two collector units to it early on in the level, resources are no longer a concern.

In sharp contrast, resources are vital in the multiplayer and skirmish modes since the resource points contain very little. The reasonably smart AI will therefore act fairly aggressively to capture them before you do, and often succeeds. In fact, computer players are somewhat too aggressive because opposing players usually annihilate each other within 20 minutes of play, leading to very short skirmish games where turtling is an inefficient strategy and may deter players who favour it. Multiplayer games are pretty constrained in configurability, with common options such as random maps and limitless resource points unavailable. In addition, the game does not feature a map editor either, and suggestions that one might eventually be released have yet to come to fruition. Players are thus limited to the roughly 30 maps packaged with the game, most of which are strongly inclined towards two-team games. One of the five possible victory conditions, an assignment of secret objectives to be completed for each player, seemed promising but with a limited amount of players in their GameSpy server rooms, that feature proved difficult to test. This comes as no surprise after looking for War Front's virtually inexistent web user community where the little of which could be found was predominantly in German.

War Front has a respectable variety of units and has a different set for each of the three armies: the Allies, Germans and Soviets. They are divided into three categories by source building, with barracks training infantry, factories constructing vehicles and tanks, and landing strips manufacturing aircraft. Most units have equivalents in the other armies but some provide unique tactical advantages to their sides, which add another tactical dimension to a game. The Allies have a helicopter unit, which give them the ability to deploy marines quickly anywhere on the map, giving them an advantage in capturing those precious resources. They also have a mobile force field generator to protect friendly units against light firepower. The Germans have mobile air defense capable of bringing down any plane in a single shot and Giant Zeppelins, which rain death upon their enemies. The Soviet army counters with massive tanks, giant turrets on wheels, and tanks blasting liquid nitrogen to instantly freeze their enemies. Unfortunately, the game lacks a naval dimension that likely would have improved the variety in gameplay. Despite these advantages, the real tide-turner is the ability to call in air-support and long-range artillery strikes from off-map locations. While all three armies have their variations, the Allies take the lead with the nuclear strike, capable of wiping out a screen-sized area within 15 seconds. Unfortunately, the tech tree is not as developed in the upgrades area. There are too few technologies to research and most of them don't have a very noticeable effect on the game. In an apparent attempt to compensate, some buildings have been given weird abilities such as periodically displaying all moving units on the minimap, preventing radar detection in certain spots, or temporarily disallowing aircraft attacks in your airspace. The developers will certainly have to do better in any sequel.

The game has a fairly solid presentation, from a packaging worthy of a triple-A title and a complete printed manual, to an unbelievable amount of high-quality in-game cinematics. The main menu is by far the game's nicest presentation element, overlaying one of two continuous wartime videos or a snapshot of the game in progress. All the clips have obviously been generated with the game's engine, which is quite powerful on its own, but must have gone through a lengthy rendering cycle to produce the quality up-close visuals. The mission briefings take on an interesting format by displaying a map of the area with a 3D camera moving around to important locations while a dialog between your main character and his commander explains the objectives. It's a good idea that's certainly more appealing than the usual text-only method but in the end, it's a bit too much information to take in all at once.

War Front's graphics engine is stunning in its attention to detail. All buildings, units and scenery has been crafted with high-quality textures, and added to the near-correct proportions of the units to buildings, the game has a very realistic look. The camera can also zoom in and change angles, so it's not just two-dimensional graphics intended to be seen from a single direction. The game also features impressive weather effects that range from rain and lightning strikes to wind blowing in the trees, causing a spring-like motion also triggered by nearby explosions. Trees will also fall to the ground as vehicles drive through them. Since aerial bombs play such a vital role in the game, the engine also takes special action to generate impressive impact craters and water reactions. There's also a day and night cycle which changes the dynamic shadows on all objects, scenery included, changes the hue and intensity of the ambient light, and even affects units' visibility radius, all without significantly affecting performance, which is an impressive feat in itself. The developers also threw in a first-person shooter mode on defensive turrets for those who like to get up close on the action, an option probably not worth the effort but available nonetheless.

The game's few shortcomings are centered in the audio department. The usual patriotic music adorns much of the game, which is an appropriate style but doesn't feature anything overly original. As with many other titles, the voice talent borders on pure awfulness and could have been left out, but at least the units aren't compelled to say overly dumb things on every click of the mouse. By far the most annoying thing in War Front is the amount of time required during the saving process, rendering the auto-save feature unusable, unless you like saving as much as playing.

Overall, War Front isn't a spectacular game and achieves average scores on most criteria. However, die-hard RTS fans may find the campaign suitably entertaining and worth the purchase price.