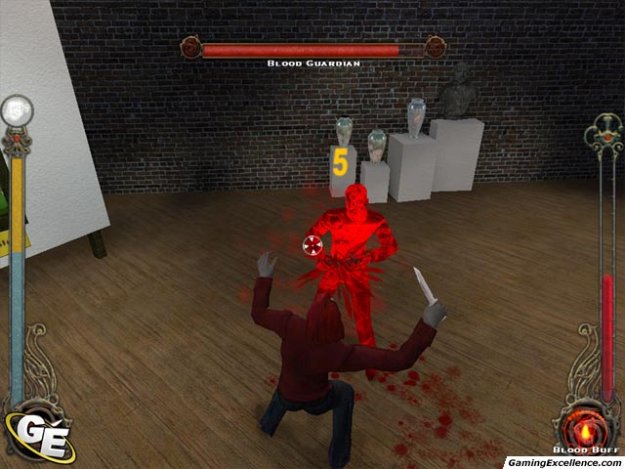 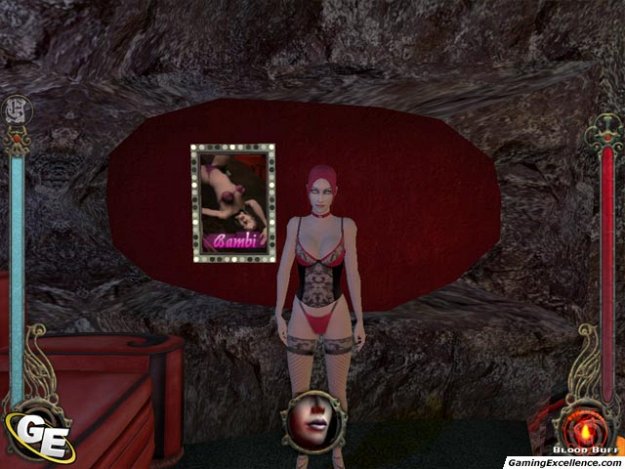 As I slunk through the dark alleys of LA with a prostitute in tow, I thought to myself, "This isn't your run of the mill role-playing game." Darkness and all the gothic goodies are what make Vampire: The Masquerade - Bloodlines interesting. The latest title from White Wolf Game Studio, Troika Games, and Activision serves up a healthy dose of atmosphere and often leaves you wanting more. But while the makers of the game claim that they present "gamers with one of the most unique, intense, and open-ended gaming experiences they'll ever encounter", don't expect the open-endedness that you would get from the Grand Theft Auto series.

Vampire is based upon the "pen and paper" role-playing game from White-Wolf in which you become a modern-day vampire in the seedy underground of LA. The game opens with the generation of your character, which is familiar to those of us who have played D&D. It looks like the developers have also kept those non-dungeon and dragon players in mind as well by providing a set of canned questions to help you choose your clan (and by proxy your sect). Clans are the "bloodlines" of the vampire who has made you into the undead, otherwise known as your sire. And interestingly your ancestor vampires and can be traced back to biblical times and the first original vampire, Cain (who slew his brother Abel).

There are seven Clans that range in characteristics from the high-brow ruling class Ventrue to the misshapen Nosferatu. Each Clan has special vampire powers known as Disciplines. Disciplines act much like spells and afford vampires their famous feats such Celerity which allows vampires to move faster than humans or Animalism which is the ability to summon animals to do the caster's bidding.

One other game mechanic that you should be aware of (apart from the standard health bar and experience points) is the blood bar. This is a meter which measures how much blood your vampire has in his system and is similar to mana. This blood is used up by using Disciplines. When your blood levels are too low there is an increasing chance that your vampire might fly over the coo-coo's nest and start feasting on any humans he can find. This can potentially violate the masquerade which is the complex code of laws that governs how vampires live and interact. If you violate the masquerade too often you will have to suffer the consequences.

The vampire character sheet also has abilities, attributes and feats. These items describe your character and have a direct impact on how you play the game. These character stats determine how well you fight and even how persuasive you are. I played most of the game as a Toreador clan member. The Toreador are the smooth talking artsy types who aren't much into fighting. So I chose to keep high scores in the social attributes. This opened up dialog paths such as persuasion and seduction, which were highlighted in a different color in the interface.

If I had to choose the best executed portion of this game it would be the story. I was utterly fascinated as the game opened and I was illegally "sired" by a sexy little vamp. However, the Prince of Los Angeles, Sebastian La Croix, didn't seem quite as happy as I did about the whole situation and I soon found myself running his errands.

The game has earned its mature rating and you will find your self running some very strange errands. It's refreshing to play a game that offers the grittiness of a real vampire movie. Through the course of the game I found a plague-bearing hooker, unmasked a lycanthropic serial killer and got in between the hottest vampire twins ever. Oh, and did I mention that I killed a vampire hunter for a stripper?

The character dialog added to the story and was one of the worst and best features of the entire game. The dialog choices ranged from campy and sarcastic to down-right funny. There were also lines that would prevent even the bravest of telemarketers from phoning you back. (See some of the screen shots for more.)

My only qualm (and a small one) with the dialog was that different dialog choices often resulted in the same NPC reaction. I think that this was one of the features that kept the story from being flawless. I know that the content creators were on a budget, but surely they could have spared a few dollars for completely unique dialog nearly all the time.

One of the missions is to clear out a spook from a local haunted house. I happened to be playing this mission late at night in a dark room with my headphones. When my wife came in to say good night I nearly hit her with my keyboard. It was then that I realized how much tension the game had been building.

The game has three endings. I played all three, but I think that the developers would have been better off choosing one ending and putting a bit more pizzazz in to it. This is one of the things that makes me believe that the publishers pushed this game out the door a little earlier than it should have gone. I guess the Christmas rush was too good to miss.

The unfortunate downside to role-playing "Slick Rick" the smooth-talking vampire was that I wasn't much of a fighter, I was a lover. One scenario offered me the chance to sneak past my enemies through a series of air ducts to get to my destination. The problem was that I kept getting stuck to ladders or hanging in mid-air stuck to grates. Eventually I ended up taking on the thugs with the old run-in-and-get-one-of-them-to-follow-you-out routines; not exactly role-playing at its finest. I also experienced some strange effects with the physics engine that resulted in objects or in this case, rats, floating in mid-air.

Very few quests actually offer you the choice of sneaking or talking your way out of trouble. You need to fight to get through this game. It was no trouble to tell that the developers are FPS fans and were enamoured with the game's Half-Life 2 engine. (I even found a Call of Duty pinball game in one of the game's seedier bars.) Considering the engine, I expected the combat to be flawless. But the result was closer to mediocre. Much of the combat in the game is spent trying to chase a "Boss" around a room. Left with no choice but to fight and stumbling around and blindly waving a pistol is not my idea of a good time. Begrudgingly I started to put points into my fighting stats just to make my journey through the game easier.

One of the puzzles that you have to figure out occurs deep in the sewers of LA. I don't want to give away any spoilers, but this section was just downright tedious. It took me a couple of minutes to figure out what I needed to do and then another ten minutes trying to time my jumps and swimming perfectly. My frustration was compounded as I got hung up on random items that were in the room.

Thank-fully a quick trip to the strip club in Hollywood renewed my faith in the Half-Life 2 engine. The beautifully detailed characters and environs did make up for the crappy combat. (Did I mention the vampire twins?) Other effects were also quite well done, such as the auras from the auspice discipline. The blood spatters at some of the combat scenes would keep the LA CSI teams busy for months to come.

My final complaint about the engine was the constant loading between areas. Running on a pretty powerful machine (Athlon 3400 64-bit, 1 Gig of RAM and an ATI x800 video card) I found that every time I left an area I had to go through a loading screen. The loading wasn't long enough to be painful (at least on my machine), but was definitely annoying. It is hard to keep your mind on blood sucking when you are watching the status bar.

Overall the game was done quite well. The story was fantastic, the voice acting well done and the game's art was as spooky as you could ask for. The game play was as addictive which accounted for my patience with the technical glitches and shoddy combat. I am not sure if Troika is doing an expansion or a sequel, but I would definitely try both.