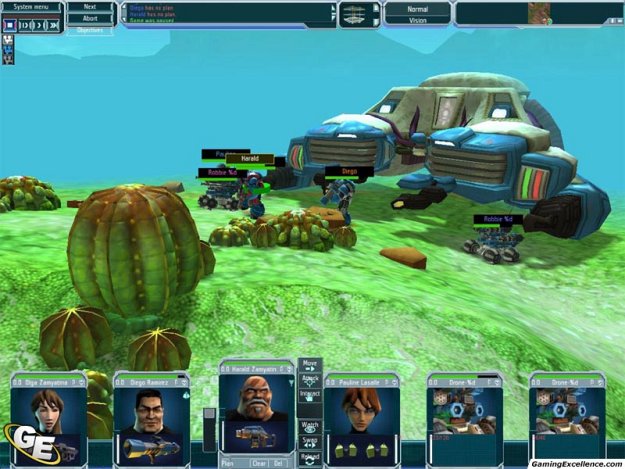 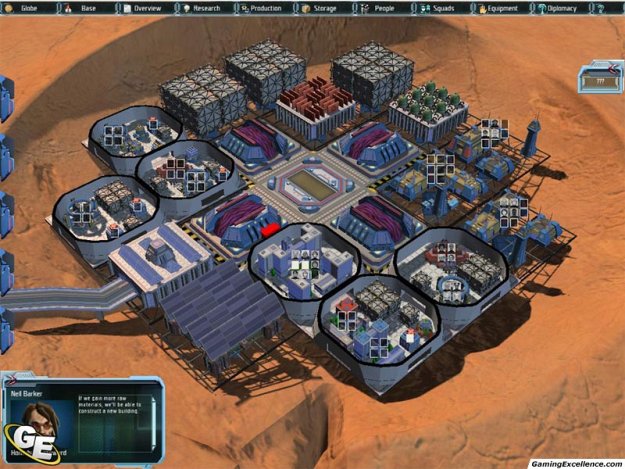 The survival of man is once again at stake from alien creatures, and once again, it's up to you to save them in this latest instalment of the UFO series. It's more of the same gameplay, but unfortunately that means both good and bad things for the player.

The story of Afterlight involves the human race losing a war to a grey-skinned, big-eyed alien race known as the Reticulans. Instead of being completely annihilated however, all of Earth's remaining inhabitants (and there aren't a lot of them) are exiled to the big red planet, Mars, and forced to start anew there. It quickly becomes apparent that they are not the only visitors, and before long the exiled remnants are fighting for their lives.

Anyone who has played the UFO series should immediately recognize the dual-layered gameplay of Afterlight. The game is divided into two sections: in the first, you're presented with a large globe of Mars, sectioned into territories of various sizes. In this screen, you perform the administrative tasks of Afterlight. This includes, but is not limited to, research, training of your troops, production, dispatching of soldiers and construction crews, and even partaking in some very rudimentary diplomacy.

There's a lot to do in this mode of the game, and at first glance, it's a little overwhelming. Luckily, there are advisors that will help you along (with some of the worst voices I have ever heard) but generally the advice is either obvious, not worth knowing, or in some cases, incorrect. An example of the latter involves the head scientist telling me that there are unemployed scientists, and that I should build another lab to do some more research. Not only were all my scientists away on a mission, but I didn't have the resources to build a lab, and wouldn't for some time.

The game requires a lot more micromanagement than previous UFO titles. You're given a single base and a single roster of characters to manage. Each character has one or two classes; either being Soldiers, Scientists, Technicians, or a combination of two of them. The class of each character determines where they can work, but they won't actually do so until you put the character in the building yourself. This can be a problem however, because when a soldier-in-training gets sent to battle and returns, you have to manually place him back in the training center after they re-enter the base.

In general, the bulk of the game is taken up with you sending your troops off to combat, either to invade an enemy's territory or to defend your own. It's here where many of the game's problems show themselves, but also the reason the game is worth playing. Once you enter a territory with your troops, you'll be brought (sometimes after a lengthy loading screen) to a battle area that represents a section of the red planet.

The arenas themselves are fairly detailed, though at first they're just full of rocks and red dust. As time passes, however, and the planet's terraformation continues, plants and greenery will appear, and depending on where you're fighting, you'll be trading shots around your own (or the aliens') buildings. The downside is that except for these details, there's not a lot of variation to the geology of the maps themselves. I'd wager there's about a dozen, if that many, maps that are actually different.

The combat is fairly easy at the beginning of the game. You give your men some guns, send them against aliens, and without any strategy whatsoever, you'll be able to take down the opponent in no time. The difficulty ramps up however, and it does so quite quickly. Extremely quickly in fact. From one mission, when you're firing at enemies that can't even raise their weapons before they're cut down, to the next, where the enemies can do the same to you. And there's a dozen of them. As well as small little rolling balls that can extend spines that kill your men nearly instantly and take nothing less than multiple flaming rockets to destroy them. Needless to say, this leads to some frustrating experiences, especially since you're given a limited roster, and when one person dies, they're dead for good. Reinforcements won't be coming anytime soon.

The AI of the game doesn't help matters either. Your soldiers know how to do one thing and one thing only: follow your commands. This does not mean they know how to do things for themselves; so when an alien is riddling them with bullets (or lasers, or plasma balls of death), the only thing they'll be able to do on their own is scream for your help. A little autonomy would've been greatly appreciated in this regard, as you often have everybody shouting at once about killing something, reaching a destination, requesting orders, and so forth, so it's a little difficult to figure what, exactly, is going on. You're at least given the option to pause the game at any time to get a bearing on the situation and dole out some commands.

The enemy AI isn't too great either. Most of the time, they'll move towards you without any regards for personal safety, often standing in the middle of plain sight while shooting. Sometimes, however, they do nothing at all, standing in place while you cut them down. It doesn't really allow for a mentally-stimulating experience, to say the least.

While the strategy portion of the game feels like you're making progress by building resource and terraforming stations, taking over territory, and reforming the planet, the tactical portion of the game can get repetitive fairly quickly. The ability to gain experience and train your soldiers does help in this regard, but not by much.

In general, the game lacks a sense of autonomy, forcing you to do everything yourself. For certain things, that can be understandable, but for elements like being attacked in battle, you would really hope the characters would be able to shoot back sometimes. The gameplay isn't going to surprise anyone that's played the series before, but it is possible for newcomers to get into it, though it might be a little confusing at first. The fact of the matter is that the game does a lot well, but a myriad of flaws and gameplay elements (as well as some bugs here and there) bring it down somewhat.