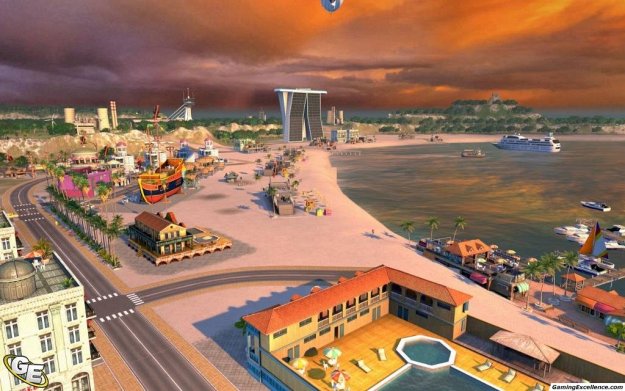 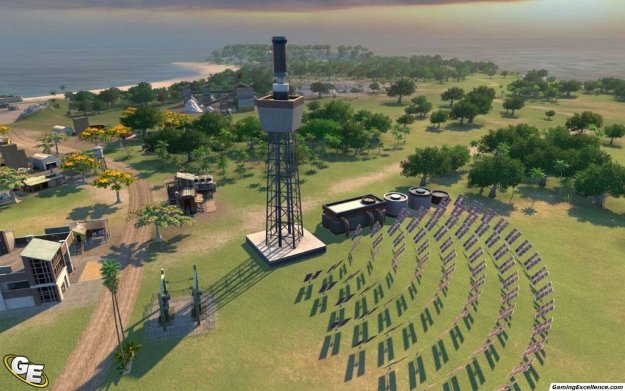 For the first time since its inception, the Tropico series is entering the modern era. Next month, el Presidente is going to get a lot more toys to expand his empire, as the island-building simulation is getting a modern makeover. Modern Times brings new buildings and modes of transportation, alongside an all-new campaign and timeline. Modern edicts dictate how your citizens use the internet, your position on the war on terror, and even allow you to wage political battles in space. Get ready to enter the 21st century.

Let's first introduce the timeline. Tropico 4: Modern Times will offer a new feature that introduces real-world historical events, and the impact they'll have on your tiny nation. Events such as the Cuban Missile Crisis, or the Latin American Debt Crisis. These defining events will have consequences and introduce new challenges to the survival and prosperity of your nation. As an example, during the Debt Crisis, you'll find that the cost to build tourism-oriented buildings skyrockets by 50%, or that the multiple assassination attempts on el Presidente will block imports of goods from the US. Introducing events of historical significance is a nice touch and adds a dynamic challenge to the traditional Tropico gameplay

As with any expansion pack, Modern Times offers a wealth of new content. Aside from an all-new campaign, players will find many new buildings, such as a new international airport and seven star hotel, and many upgraded buildings, such as bio-farms and organic ranches. Many of the older facades have been overhauled as well, and it's very possible to have an island nation where part of it is stuck in the past, and the other side is a sleek, modern skyline.

Let's briefly cover some of the new buildings, and their various options.

The new bio-farm and bio-ranch are upgraded versions of your traditional farm and ranch. Once you place your first bio-farm, you won't be able to build anymore old school farms, but your old structures will remain as-is. The new bio-farms are much more flexible, free up a lot of space, and can produce corn, food, or cash crops.

On the tourism front, you'll find a new sanatorium, which can be used as an exclusive rehab center for wealthy tourists, or simply to brainwash your citizens into loving el Presidente. The new international airport is much larger and able to handle more traffic, and the seven-star hotel will introduce tourists to a world of luxury.

Your citizens will be able to find jobs in a new manufacturing facility, which is able to produce high-end electronics or simply a sweatshop producing knockoff merchandise (which really angers the US). Modern Times also showcases a number of buildings designed to support non-manufacturing based economies. For starters, you'll find a new telecom HQ, which allows you to employ workers in customer satisfaction, telecom scams, or cold calling to promote your tourism sector. As well, a new business center allows for the creation of ad agencies, mortgage brokers, or insurance companies. These insurance companies collect premiums from all of your citizens, however, be prepared to write a big cheque in the case of a natural disaster.

From shacks and shanties to high end residences, your population need a roof over their heads. Modern Times introduces upgraded shelter options, including in a new apartment block and condo, which product much less crime and pollution then their grungy old-world counterparts. Alongside the new housing complexes is a new supermarket, which has the option of selling junk food (which is awful for your citizens, but they'll love you for it), or healthier alternatives (which results in a healthier, but more bitter population).

Let's not forget el Presidente's space race. Your tiny island nation can create a space program, which is capable of further advancing the world's space goals and sending citizens to the International Space Station, or simply utilizing satellites to broadcast your propaganda from space.

And finally, a little something for yourself. Modern Times introduce a new presidency building, which can be upgraded to a palace when you reach a certain level of wealth and happiness. Even el President needs a nice place to live.

The biggest overhaul in Modern Times isn't the new buildings or campaign; it's the new transportation system, the metro station. While expensive to build, the underground metro is designed to eliminate one of the biggest gripes against its predecessor, the ability to create districts and have workers travel across the map to reach their job. One of the key issues addressed specifically is where workers would travel all the way across the island to their job, produce one item, and then travel home. Not only did this create a lot of congestion, it was a constant source of frustration. With the introduction of metro stations, you simply build a station in each district or area of your island, and workers will utilize the system for both getting to work and getting product to market, all while reducing pollution and congestion on the streets. The tunnels are connected automatically and the stations will become progressively more expensive to build as the system is constructed.

Modern Times is a significant expansion to Tropic 4, and introduces a lot of new content to the series. The first foray into the modern era, we're excited to bring the world of Tropico into the 21st century. Tropico 4: Modern Times ships next month on the PC and Xbox 360.