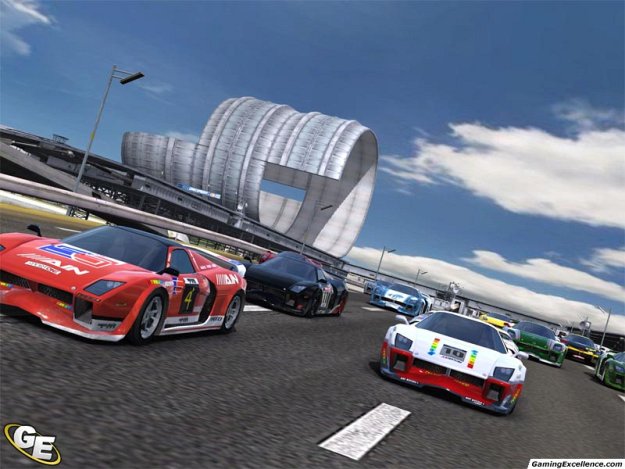 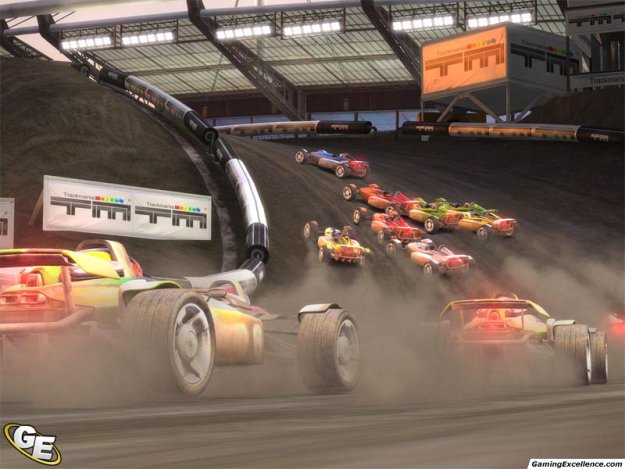 Amidst all the racing simulation games that have been coming out in recent years, French developer Nadeo brings us TrackMania United, a not-so-realistic racing game, and the latest entry to the TrackMania series. Available in the United States via Steam download, this arcade-style game takes you back to the days where racing games were less about the cars and more about the actual racing. Then again, I've also never seen so many hotdog ads in my life; there's an ampm ad at almost every turn.

TrackMania United offers nearly 200 tracks across three modes which are creative and a blast to play. The best part is that you don't have to do fifteen or more laps for races; instead each race is no more than a minute or two, depending on the difficulty. There are seven types of tracks set in different environments which range from a dry desert to a rustic countryside. For each environment there are brief ten second drag races to give you an idea of what the courses would be like. There are four difficulty settings, easy, normal, hard and extreme, each with a set of five tracks. The next difficulty is unlocked once the set has been completed within a reasonable time frame (placing in either gold, silver or bronze would help). There are a lot of tracks but they're all relatively short, so it doesn't feel tedious to try multiple times for a high score.

For those who are expecting a long list the cars, there isn't one. Each landscape provides a different type of car for you to jump off ledges and do loops. You'll start off with a formula one-style car in the stadium setting, and eventually you'll get to drive a truck and rally car, among others. It's ironic that the "American car" is the beat up looking vehicle that's about as stable as a cardboard box and set in the desert. All the vehicles handle very differently, so there may be tracks that you prefer to play more often, simply because the car handles better, even though most of the cars are extremely sensitive. But with a stretch of the imagination, it'll work out and you may find it a lot more fun than if it were real.

In solo mode, you race for the best time. You can choose to see your opponents, which gives you an idea of who to beat if you want to get gold. They're all ghost cars as there is no contact in this game, you won't find any Burnout-style destruction here. You can also choose to see your ghost car if you had previously completed the race. This comes in handy the first few times you try a track since the gold car always takes the best lines. It also guides you on where to go since some of the turns aren't clearly marked when you're dodging obstacles. There is a lot of trial and error involved, since sometimes you have absolutely no idea where you're supposed to land. If you screw up, pressing enter will instantly reset from the last checkpoint if you still want to continue the race. Hitting the delete key will allow you to instantly go back to the beginning of the race. Fortunately, there is no loading time here which is fantastic, so it allows you to quickly restart and try again. The downside is that some checkpoints are not very forgiving where they don't give you enough room to gain the momentum needed to make some of the jumps.

If you do happen to get bored of the tracks, there is a track editor that is included so that you can create your own and share with others online. You can spend a lot of time online checking out other people's tracks and racing people from around the world. During solo mode, you can choose to do an official race, which will rank you against other players online. TrackMania United uses "coppers" as currency. Coppers are needed to do official races and used to purchase tracks, and can be earned by logging in everyday as well as completing official races under the target time.

One of the other modes is Platform Mode, which involves getting to the finish line by doing crazy stunts under a certain amount of resets. The lack of a decent map makes it hard to determine where to go, but the jumps are fun and you'll feel a sense of accomplishment if you can nail the course.

Puzzle Mode involves setting up a track with a limited amount of pieces to connect the start line and finish line, as well as any checkpoints in between. This mode definitely provides something different to do, but when you're eager to race and actually use the track, building them with a set of restrictions can be more of a challenge than you're looking for.

The track editor that is included allows you to make virtually any type of track you want. You have the option of choosing the kind of landscape, time of day, and the track pieces are provided for you. You just need to snap it all together and you can share them online for coppers. If you don't like the way the standard cars look, there is the option to give them a new paint job and deck it out with a large number of stickers.

Multiplayer mode is where TrackMania United will provide non-stop hours of entertainment if you're all about where you sit on a leaderboard. The ability to connect with other racers around the world and check out their tracks is limitless. Some people use this as an opportunity to feed their ego or have what is left of their confidence crushed because they can't make it past the first checkpoint. There is a large following in North America and Europe so there are always people to play with. Through Manialinks in the main menu, you can see what's going on in the TrackMania community.

The graphics for TrackMania United are solid, but there is nothing that will make your eyes pop out. The game is focused more on the gameplay which is nothing to complain about. The background and landscapes are detailed enough so it doesn't feel like you're always in the same place, even though you're basically driving through a re-shuffled version of the last course that you were on. The sunsets and night skies give the tracks a different feel to break up any monotony.

In terms of audio, the soundtrack does the job of setting the mood for the different environments, but there is very little variety and nothing stands out. Each of the cars has their own distinct sound but other than that, this isn't the type of game where you'd run out and buy a new sound system.

TrackMania United is one of the best racing titles I've had the chance to come across in a long time. Don't get me wrong, I absolutely love the Burnout series, but it's been awhile since I've had an engaging and addictive racing game to play on the PC without having to worry about upgrading my rig. The in-game advertising is a bit of a disappointment, with billboards plastered around the tracks. The ads are region-specific (thus somewhat relevant), but it doesn't stop them from being annoying, especially considering this is a retail product. Regardless, TrackMania United has the tracks that any child who grew up with Hot Wheels would enjoy. Although it's not a visually engrossing game, it is entertaining and simply a blast to play, which is what really counts in the end.