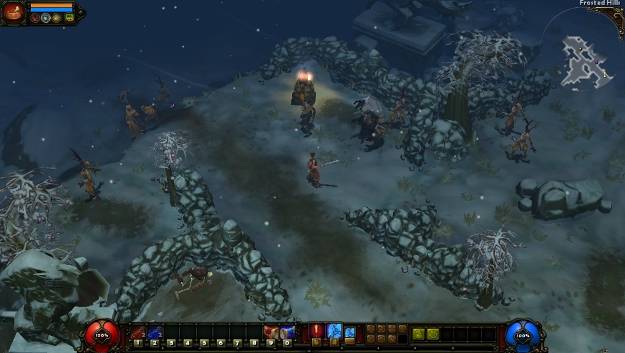 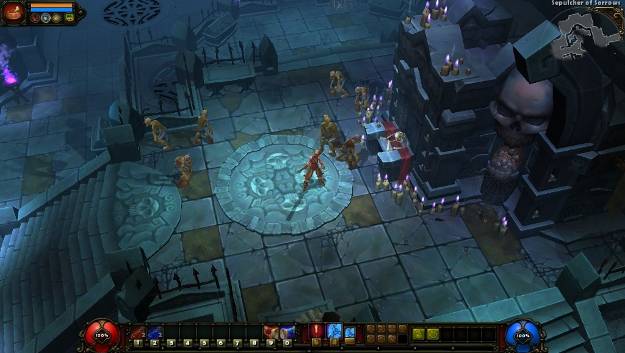 The first Torchlight came out at the beginning of last year, a fairly unexpected title full of good art, simple but fun gameplay, and loot. It was your basic dungeon crawler formula, polished to a bright sheen. Its biggest flaw, however, was the lack of multiplayer, instead forcing people to play through adventures on their own.

Runic Games walked me through some Torchlight II gameplay, seeking to fix the problems that the first one had, notably that one of online play. Instead of just creating an identical game with the same characters and plot, however, Torchlight II was made as a brand new title, with new classes, abilities, story presentation, loot, and map design. LAN and online capabilities just make all of that better.

I was shown the newest-announced class, the Berserker. A melee-focused class (of course), the Berserker is themed around three different animals: the raven, dragon, and wolf. Each of the berserker's skill trees are themed around these 'spirit creatures', lending the warrior his strength. I got to see a standard powerful melee strike (wolf) as well as a flame breath (dragon) in action.

There's a lot more new content to the game besides the classes, though. A new loot system, with more sets (and more items per set), as well as more weapon types, such as a cannon, claws, and great weaponry that takes two hands to wield (swords, axes, and maces). The items abilities have also been deepened, allowing such abilities like one where a spell is cast every time you hit an enemy.

The item enchantment system will also likely be changed in the future, as the developers found that it tended to go contrary to how loot functioned: in the previous game, it was too easy to just keep enchanting one item over and over and over again to make it more powerful than any random drops. The maps are a lot less linear because of this, and it looks like you'll have a lot more freedom in choosing where to go. In terms of length, the game is structured to be around three and a half acts long. The story is also deeper, with better writing and cinematics, rather than a few paragraphs of text between chapters.

Talking to the developer, it's clear that they've made sure to address shortcomings in the first game, some simple examples given to me was that of identifying items: in the first, it was a tedious process with very little result. This time around, however, you'll automatically identify any item that is at or below your current level, which means that the only ones you'll need to go through the process with are with those items that could have a tangible benefit for you. Another change is the unique item system, where unique this time around will actually be powerful items, not just a regular item with a few good enchantments as per the first title.

Torchlight II looks like it has a lot of promise, better in almost every way to its predecessor. When it comes out this year (nothing more specific than that could be given), it's definitely the game to look for when it comes to a loot-filled adventure.