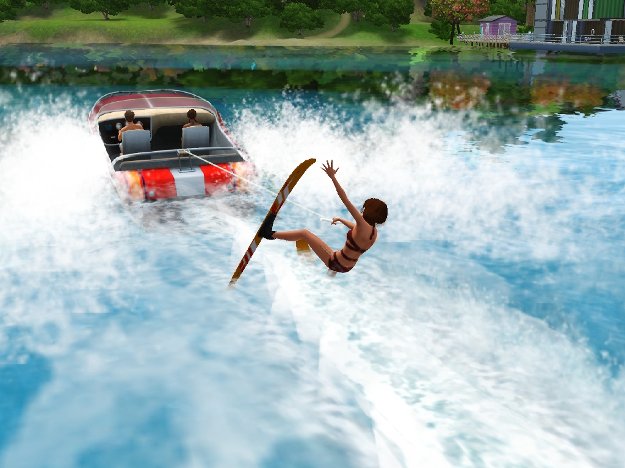 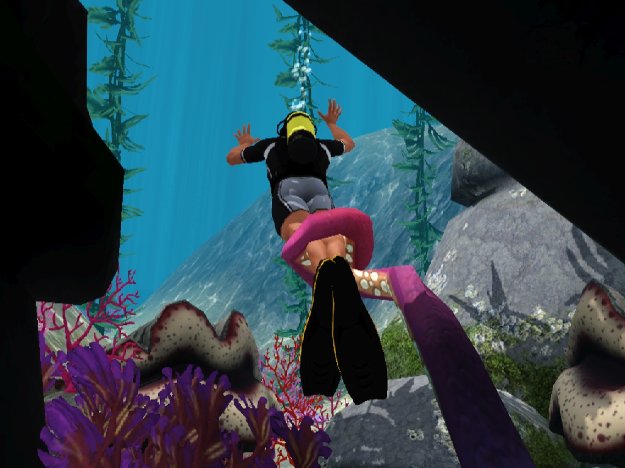 Island Paradise is a beautiful new expansion for the Sims 3 series, incorporating some very immersive aspects of gameplay.  It’s very awesome to have Sims not only swimming in the ocean but living in it, diving in it and traveling around it on a variety of conveyances.  And it takes the beautiful island setting and naturally opens up the possibility for the Sims to capitalize on it by opening up resorts. It does a lot to take their environment and to fully drop the player into the experience.

However, as impressive as the expansion is, it has a few glitches, bugs and other quirks that negatively impact the expansion as a whole.  Isla Paradiso is the new neighborhood that the Sims live in for the Island Paradise expansion pack.  It’s an archipelago, a series of interconnected islands that house all the various municipal buildings and residential lots that the residents live on.  Sims can now live on the islands around the map as well as on portable houseboats.  These buildings can move around the island, dock at any of the various ports that are placed all over the neighborhood.  Sims have a variety of boats that they can use to travel around the island as well. 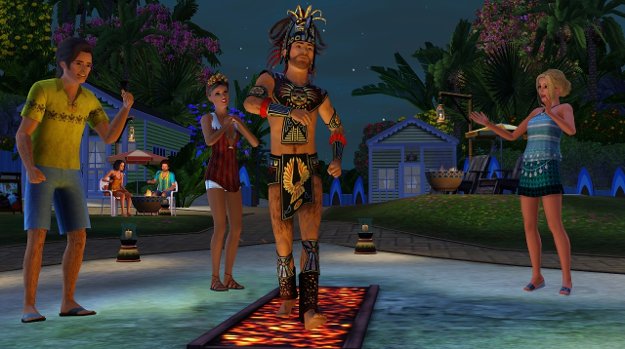 For any Sim that lives on an outlying island or that’s docked at one of the far flung ports, travel around the island can take hours on end.  Speed boating isn’t really speed boating, as I learned the hard way.  Even the fastest boat can take forever to move from one end of the island to the other and the houseboats travel like marshmallows in molasses.  If you’re not prepared for the time investment, it can take a while to conduct business around the island.  It’s honestly easier for your Sim to live centrally, which defeats the purpose of the freedom the island is giving you.

Also, one of the big selling points of the expansion pack is the diving system; the new skill that allows Sims to travel into the ocean to find collectables, treasure and to meet mermaids up close and personal.  The dive skill levels up with diving practice in the designated dive spots and with snorkeling, which is a skill that can be practiced in any body of ocean water.  The dive spots are gorgeous locations, complete with underwater life, caves to explore and treasure chests to plunder.  When a Sim is diving, they have a limited air supply before they have to resurface.  Once you surface, you have two hours in which you must decompress before sending your Sim back.  There were a few times when I was diving and sent my Sim to explore a cave when they inexplicably ended up on the nearest shore.  The spawned themselves out of the water and I had to wait two hours before I could send them back in.  It’s very annoying and agitating, putting a glitch in a system that otherwise works very well.

And as good as the dive spots are, they are only officially in Isla Paradiso.  The official word is supposed to be that the oceans in the other worlds aren’t deep enough to support dive spots.  However, Sim players have already determined that it’s completely possible to construct and make dive spots in other worlds.  The dive spots are a rich, expansive tapestry of opportunity and they’ve limited the player in its use.  For any player who also has Ambitions, the dive skill translates into a self-employment career.  But it’s a self-employment career that can only be carried out in that one neighborhood unless the player uses the build cheats to construct their own dive spots in the other hoods. 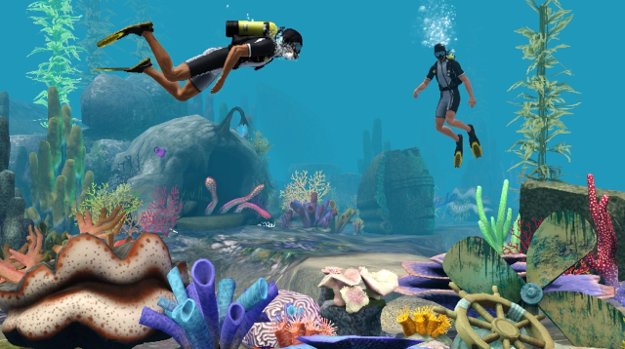 It’s a very odd set up.  On the one hand, you’ve got the amazingly awesome mechanic that the players can utilize, have fun with and generally enjoy.  On the other hand, it’s limited to one place only unless the player goes through hoops.  It feels like a vacation spot that’s been turned into a livable neighborhood, which is awesome.  It’s like a World Adventures dream come true, with players actually being able to live in the locations that they can have these mini adventures in.  But it feels odd to be able to do so because of the precedent that World Adventures has setup.  Isla Paradiso should either be a vacation world or dive spots should be available as templates to place in other worlds.  It seemed like a very strange design choice that I’m not sure I agree with completely.

On a very positive note, one of the other selling points of the expansion was handled extraordinarily well.  The resort system is an elegantly designed addition to the game as a whole and one that I’m very pleased with overall.  Sims buy a resort tower and construct a front desk and cafeteria area as the bare necessities for a resort.  Other amenities can be added, such as a pool, bar, wedding chapel or other entertainment options.  Your playable Sim or other family members can help out at the resort, working shifts at the front desk and bar or helping to clean up around the place.  Employees can also be hired to take care of all that for you.

It’s relatively simple to make good money with the resort.  You pay attention to the reviews that come in daily and they help give you guidance for what needs to be fixed or upgraded at the resort to make the customers happy.  So long as you balance the cost of the resort stay with the cost of the employees and upkeep, you make a profit.  And what a profit! Between the money that my Sim was making and the Lifetime Reward I bought that increases resort profits, I had at least seven grand coming in a day.  It’s a very wonderful system for making money for your Sims family without having to go to work every day. 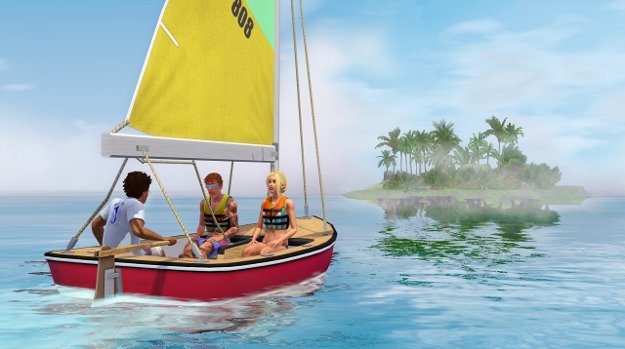 There are however, problems with this system as well.  Maintenance workers can be hired to help keep the place clean and keep plumbing repaired.  However, you can only hire three, no matter how big the place gets.  You can have a sprawling resort on a 64X64 lot, the biggest in the game and only have three workers helping to keep the place spic and span.  Meanwhile, there can be dozens of Sims randomly wandering around your resort.  It would be nice if more workers could be hired to help keep the place clean and I’m not sure why the number three was settled on.  One of the best ways to get around it is to have a Sim with a high enough Handiness skill to upgrade the plumbing so that it will never break, preventing Maintenance workers from having to repair any objects.  It means they can focus all their efforts on keeping the place clean.

Also, I experienced another glitch with the resort experience.  When you have a pool area, there is a subarea that exists on the lot.  That area can be accessed by the game and when I mean accessed, I mean that roach spawners can appear down there and negatively impact your resort rating.  They should spawn on the ground level where maintenance can deal with them, but sometimes they don’t.  It means that cheats need to be used to correct the problem and unless the player knows this, it can be a serious problem with trying to improve the resort.

The lifeguard career is just like any of the other Ambitions careers.  It has its pluses and minuses; the biggest plus being that it’s interactive and interesting to watch your Sim run around the beach saving people.  The minus is that you have to babysit them while they’re on the job to make sure it gets done right.  It’s another interesting option for players.  And the Mermaid life state that was added in is also just another option for players.  There’s nothing remarkably outstanding about it except that Mermaids automatically have a level 10 in the diving skill for players who want to utilize that option.  But once again, they have not included Mermaids as a creatable life state from the start for players, instead making it so that you have to obtain them in game.  I thought it was an odd choice when they did it with Plant Sims and I think it’s an odd choice here; I’ll make the same argument that Genies can be made from the start and they’re supposed to be just as difficult to get a hold of as Plant Sims or Mermaids.

The expansion has a lot of very good elements in it that enhance the Sims 3.  There are flaws inherent in the design and those flaws impact the game, but they don’t completely ruin it.  It’s a very good expansion overall.  The final result could use some tweaks but I think it’s an excellent addition to the series.