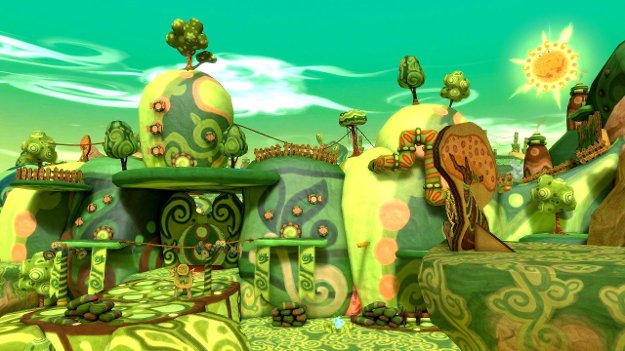 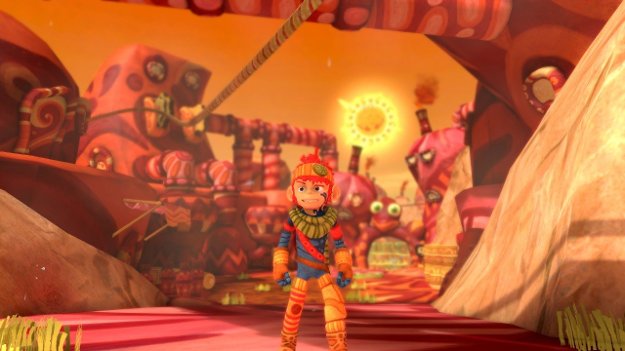 In an industry where 'gritty' and 'hard-hitting' are marketing buzzwords and goals for developers to reach far too often, it's really refreshing to find games that instead go the other route, filling our screens with colorful worlds and animated characters. The Last Tinker: City of Colors is a colorful ride through a crazy, artistic world filled with characters splattered with color that not only uses this artistic style as a visual element, but incorporates the hues into gameplay as well.

The Last Tinker is, at its core, a combat platformer with some puzzles thrown into the mix. You'll be making your way through the different districts of the titular city, trying to rid the world of a colorless entity that is intent on covering everything with a grey substance that drains the colors from the world, freezing living creatures in place like statues. The platforming itself is pretty simple: holding down a button will have you leap off of platforms, jump from point to point, and leap onto rails to travel around the various levels. This means not having to worry about making any precision jumps, making the platforming a lot more puzzle-oriented, like trying to find different points to jump across or timing your jumps over points that are rising out of water. 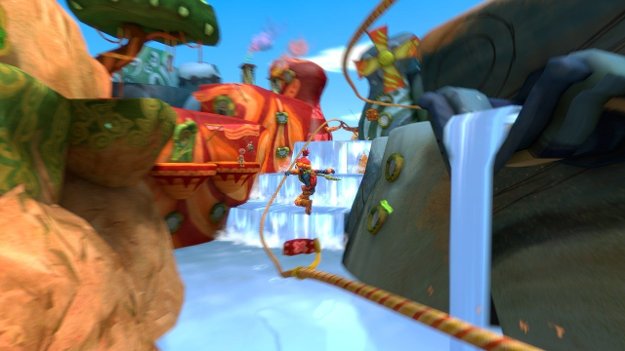 The puzzles aren't terribly complex either: hit switches, open doors, find paths and find routes around the deadly substance around the world, called 'Bleakness'. From time to time you do get access to a mushroom buddy that switches forms between a large version (named Biggs) and a smaller, more explosive form (named Boomer). This...pair form the basis for some of the more complex puzzles in the game, as each of them can perform different tasks, like stomping switches and blowing up obstructions. Though their presence brings a nice ripple to the standard puzzle gameplay in Last Tinker, they have their own issues - biggest of which is how you control them.

Biggs and Boomer come to you when they hear your character whistle. Problem is, getting them exactly where you want them to be, like on a switch or next to a station that can change their form, can sometimes be problematic. Additionally, their hearing range is disappointingly small, often forcing you to backtrack to get close enough so that they can actual hear you trying to call them. The peculiar controls (at least, on the PC version I played) don't really help this either

See, the 'shift' key is, for some reason, used to whistle. Conversely, the 'space' button is used to run. The game in general doesn't play very naturally with a keyboard, and just feels awkward to control (but luckily supports controllers). Bizarrely, there's also no way to change the control scheme.

There's a fair amount of combat in the game as well, and though it doesn't require any complex strategy, it makes up in this regard by being fast-paced and offering a decent amount of variety in enemy types. Well, except the areas in the game where you must defeat the Bleakness by fighting waves of enemies while destroying an orb, a repeated section that always feels monotonous. However, combat is also the section of the game where its driving mechanic, color, is brought into the forefront. 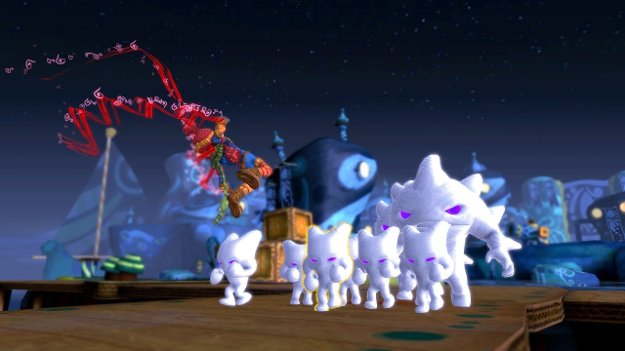 In a game called City of Colors, it's no surprise that color is an important aspect of the game. The world is composed of three colors: red, blue, and green, and each represents a type of emotion, such as passion or curiosity. Wielding them in your punches allows you to affect enemies - do basic damage with red anger, scare your enemies into hazards with green fear, and freeze them in the place with blue sorrow. As battles become larger, it's not uncommon to be wielding the three colors, one after the other, as the game's control scheme makes it easy to use them fluidly. Color also affects Biggs and Boomer differently, causing them to do things like flee and explode, leap up and down heavily, or let you ride them while plowing through enemies and barriers.

The Last Tinker: City of Colors is not a game I was really expecting to enjoy, but it's a really solid title that's fun to play for a wide range of gamer types. The gameplay isn't very complex, but switches itself up often enough to stop itself from getting stale, and the pacing of new colors and gameplay mechanics is well done, preventing you from either getting overwhelmed or bored with what you're given at any given point (though the introduction is a little slow, before the meat of the game begins). There are some hiccups due to a lack of polish, but they don't really affect the game itself, just how smooth every moves. So, despite these, I'd definitely recommend the game to those looking for a game that's just as simply enjoyable as it is colorful.