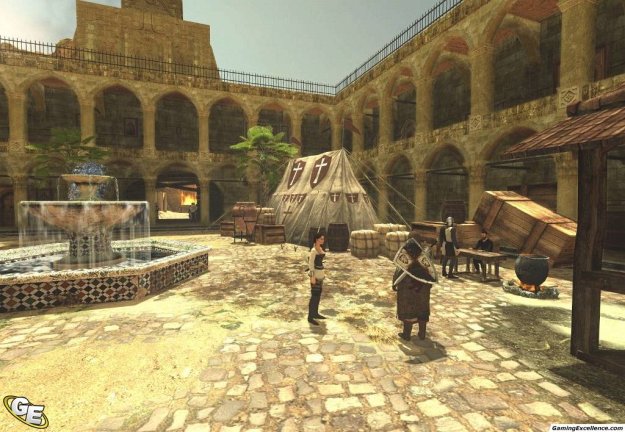 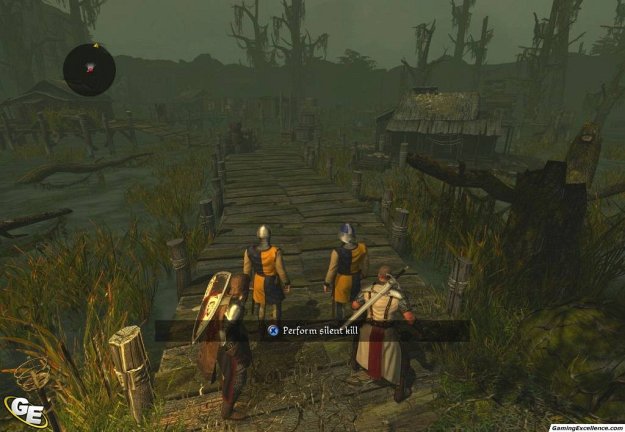 The First Templar is the story of Celian d'Arestide, a French Templar living through the time of the Crusades. He is a noble man, seeking to live up to the highest of standards; helping the innocent, being chivalrous and attempting to advance the Templar Order. In his studies and research, he finds information that he feels points to the Holy Grail. He is joined in his quest by a fellow Templar Roland, as well as Marie d'Ibelin, the descendant of a Templar. Throughout the game the characters travel across different location in Europe and the Holy Land in their quest to find the Grail, dodging the Holy Inquisition who starts to prosecute the Templars after they are declared heretics by King Phillip of France.

The sneak mechanic is fun, as it's always fun to visit death upon unsuspecting enemies, but it is admittedly a little broken. Enemy line of vision is poorly handled, to say the least. They have a ridiculously small line of vision and practically no peripheral vision, making it easy to sneak up on them and in some cases to be walking practically next to them without them noticing you. Their line of sight is incredibly short as well, giving the player another advantage with the sneak mechanic.

But they're just about as dumb as rocks. The dead bodies of their buddies don't seem to bother them in the slightest and they walk right by them without even blinking. However, they occasionally and inexplicably break their pattern of stupid and are able to see you from incredible distances. And if you make the smallest movement to one side when trying to assassinate them (when you're not supposed to be in their line of vision), they sometimes freak out and prevent you from being able to stealth anymore for that area. The game does try to put in a distraction mechanic to assist in more difficult areas, but there can still be difficulty using the mechanic.

Combat can unfortunately be a little repetitious, with the basic attacks mapped on two buttons and a few mapped to others. This leaves a very strong impression of the game being a button masher which it tries to rectify by giving the characters special attacks they can perform to break up the gameplay. Sadly though, some of the moves aren't the most responsive. It can be difficult to time them properly in order to get them to activate the way they're supposed to, and some of the moves interfere with other abilities. For example, Marie interacts with objects with the same button she uses for a particular special attack, leaving the character sometimes wasting energy to perform a special attack when all they wanted to do was open a chest.

In addition some of the moves just flat out can't be performed on certain enemy types. There's no real indicator of which enemies the attacks can be used on, leaving the player to figure out when trying a special attack is going to get their face punched in. The best thing about the fights is that the moves actually look pretty good, with occasional special animations where the characters murder the heck out of their enemies.

Game puzzles are manageable but can be a little annoying at times. The game is designed so that puzzle solving is a cooperative venture, meaning that when playing in single player, oftentimes the puzzles have to be completed twice to finish them. That room with the spinning blades? Yeah, you get to go through it twice. Luckily the computer AI is fairly intelligent and in the areas where it can automatically follow you, it does so quite well.

Each level has main objectives for you to complete as well as additional, bonus objectives that serve to give you more experience for your characters. They also contain a variety of collectibles in the form of chests and tablets. The chests contain various items, ranging from experience to new outfits for the characters. Other times they give temporary abilities that last until the end of the level such as extra health or special attacks. The in game mini map shows the way to the objectives and collectibles as well as showing where health pickups are. This is incredibly useful when running low on health and having the collectibles show up helps eliminate some of the frustration in finding them. Not all of the collectibles are automatically on the map however; the characters have to find clues in the level to help point towards some of them, providing some challenge. For most players it's pretty easy to get all of the pickups with simple exploration, maximizing the amount of experience characters receive.

The level up system in the game is unfortunately quite annoying, however. The main fault here lies in the inability to see what abilities are available until you're unlocked abilities near them on the leveling up tree. This leaves the player blindly flailing around and randomly putting points into abilities in the hopes that it will unlock higher level abilities that are going to be useful. The game gives out a decent amount of experience though, making it fairly easy to level as you play. Levels can even be replayed once finished, allowing for the characters to gain more experience and level up further before upcoming missions.

First Templar can be played one or two player, with the second player taking on the role of either Roland or Marie depending on the level. Two player can be either same system split screen or over the internet. Same screen kind of sucks though, because the second player can't get achievements and progress isn't saved as they go through the levels. Even in two player online, achievement progress seems to have trouble saving itself properly, although the second player is able to actually earn achievements. Two player online seems the way the game was intended to be played, but even then, the story progress and character advancement is only saved for the host. So if the second player turned on their system, they wouldn't be able to play the game from any of the levels they'd already completed. Along that same vein, only the first player can actually assign experience points, leaving both characters' progress entirely in their hands.

The story of the game is actually quite interesting though, with the characters trying to figure out where to find the Grail amidst the mystery of what is happening with the King betraying the Templar order. The collectible tablets that you find over the course of the game give snippets of Templar history and story, providing an insight into the order and a colorful background to the game. All of the tablets are narrated, and the voice overs are fairly convincing. Voice acting in the game wasn't too badly done in general, however the character animations left a lot to be desired.

The graphics were perfectly fine for the most part until the characters starting talking. The animations were poorly constructed for talking and the movement animations were just plain annoying. Most of the characters had only a few movements that they would make that looked horrible when used during the cut scenes. For example, Roland has an animation where he pounds his fist into his hands. He kept doing it, over and over again to the point of being laughable. It was horribly inappropriate to what he was saying in many instances, and it was just annoying to have to keep seeing it. Animation for many of the characters in the game was also sloppy and annoying, with every single monk in the game looking exactly the same. It was especially annoying considering that multiple monks speak to you over the course of the game and are all supposed to be different characters and not the same person.

For a game that has a decent amount of cut scenes and tries to make the player care about what's going on, they do a poor job of making the secondary characters likable. Roland and Marie are aggravating and obnoxious to listen to. Every cut scene where they opened their mouths was an exercise in patience as I tried to ignore the things they were saying. I actually felt bad for Celian having to deal with the two of them.

Music in the game left a lot to be desired as well, unfortunately because the game developers got a little lazy with it. The music that plays is nice to listen to and is has a fun Middle Eastern vibe to a lot of it, appropriate for the Holy Lands. However, the music cycles through a few different scores, randomly starting and stopping whenever the game decides that it wants to, as opposed to the music being consistent throughout the level. And the character noises are disappointing as well. I'm not entirely sure what triggers the sound effect, but I heard hundreds of 'Wilhelm' screams from dying enemies over the course of the game, and I am so over it now. I never want to hear another one again.

First Templar leaves me with mixed feelings. One the one hand it's a very fun and engaging game to make your way through with a friend, but on the other hand it has little problems here and there that mar the gameplay. It seems like it was sloppily put together and could have been better constructed all around in order to make the gameplay more fluid. It's a decent game to go through at least once and is definitely worth picking up. Not necessarily at full price, but it's certainly worth playing.