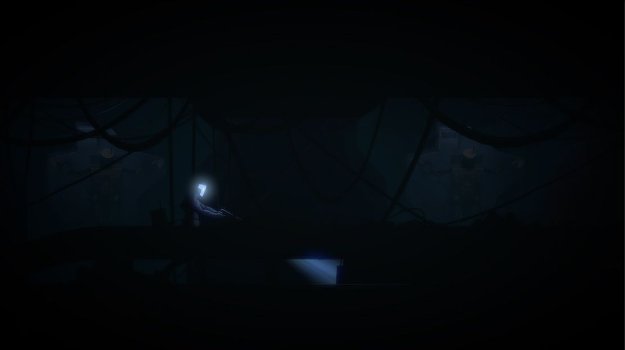 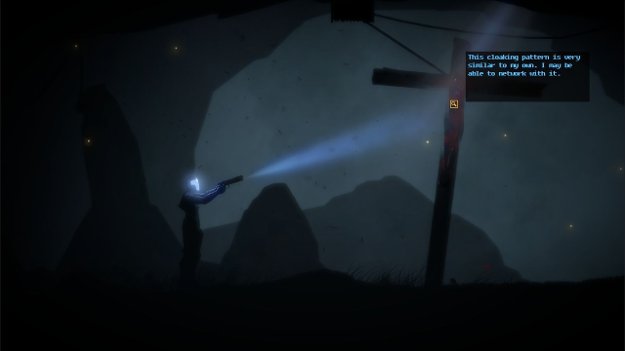 An side-scrolling shooter mixed with point-and-click adventure game elements and a main 'character' that's nothing but an AI controlling a suit, The Fall is a peculiar blend of styles and genres. Intriguing, in a way, as I've never seen anything quite like it, but a little flat in some areas that cause the game to drag on, the result is still pretty enjoyable even through the rough patches.

Initially, it's easy to believe that The Fall is a typical side-scrolling shooter, one that's made many-an-appearance in the video game scene. But it's not long before you find yourself conducting actions more suited to point-and-click adventure games: picking items up, combining them with other items, exploring your environs to solve puzzles, and examining the environment for background plot and environmental flavour text. The styles blend well, as instead of having to pixel-hunt as with so many games of the genre, any items that you point at with your character's flashlight light up, allowing you to interact with it. The interface is a little clumsy to use, but it gets the job done well enough.

There's also combat - there's not a whole lot to say about it though. From time to time you'll encounter hostile robots that you must engage in side-scrolling cover shooting that works well enough, but is pretty simple and superfluous. It neither adds nor detracts anything from the game. 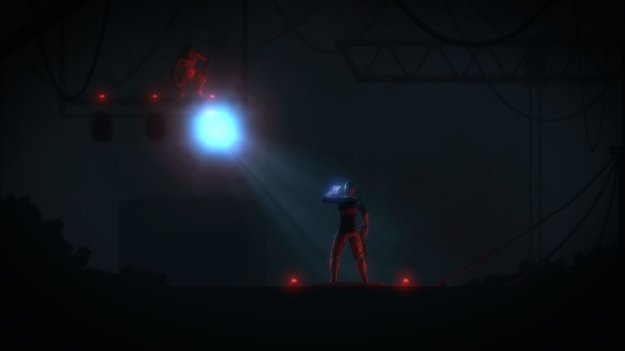 My only real issue with the gameplay itself is that it's still far too easy to miss some interactive element because you didn't point your flashlight high enough, or you swept across it too quickly. Because the environments you wander through are fairly large, and can take minutes to traverse (which doesn't seem too long, but if you need to walk back and forth because you've forgotten something, can really stretch on), hitting a puzzle wall and having to retrace all your steps to see if you missed something can be a real pain in the butt. There's one place early in the game, for example, where there's a panel you must shoot to proceed - I couldn't find it, as it was high above with little clues that I even needed to shoot it to proceed. I had just thought the game was bugged.

Puzzle design is a mixed bag. When it comes to the individual puzzles themselves, the game is pretty good with solutions that aren't convoluted, or aren't very well-explained. The rough patches I mentioned before come from the reasons for the puzzles' existences in the first place. Often, you are performing meaningless tasks to make your way forward that, while individually interesting (like finding sideways solutions to a series of tests that have long ago deteriorated and become impossible) are, in context, pointless (the reason for those tests? To prove that you are a domestic robot. You're literally performing chores). These sorts of contexts unfortunately dominate a majority of the game.

So these areas, flat as they are, make the game really slow-going and feel like a way to pad out the length of the title, which is pretty short anyway. In between, however, are areas with an interesting story involving you, an AI in control of a personal combat suit, trying to find a way to provide medical attention for its sole occupant in a strange, deteriorated facility. Though there are only a few characters in the game, I found them each interesting in their own regard, and wouldn't have minded seeing more of them. The story more or less revolves around them and the past of the facility you're in, which gets darker the further you explore. In short, these moments away from the mundanity of some of the chores you perform was a highlight for me.

I liked The Fall, even though it's got some real flaws. It's a fairly short game that can be completed in an evening, but what it does is a pretty decent attempt at mixing up the adventure game genre with a few new elements. Though a lot of the puzzle contexts fall short, the game itself doesn't drag on enough for these areas to become too much of a problem. It's a decent enough game to spend some time with, with a interesting, constrained story that follows this lone AI with its single task. In my opinion, an atmospheric adventure game worth the time it takes to follow through to the end.