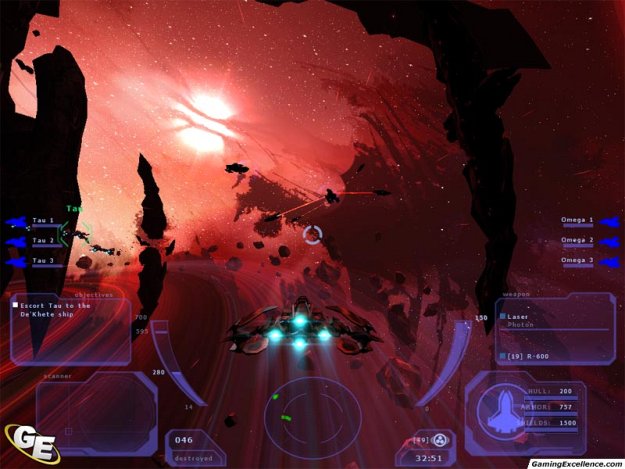 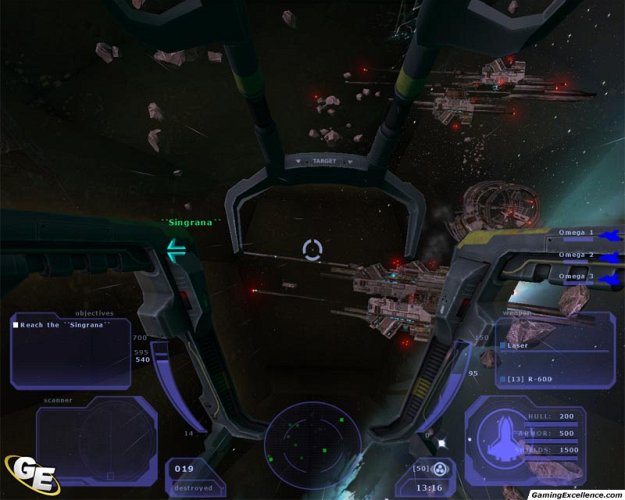 Tarr Chronicles starts out as your standard fly-and-shoot space fighter game, and doesn't really deviate from the formula. However, it throws in enough content, as well as a pretty decent amount of customization to satisfy quick action cravings.

The story involves the accidental jump of a ship and its crew to a place far, far away from home. A simple trip back is all that's needed, but the forces of the Mirk, a galaxy-consuming force with no motives and no mind has infested nearly every part of the galaxy. That makes the journey home a little more complicated. You take the role of a pilot in the highly-skilled Omega squad, tasked with defending your people until they return home. The plot is decent, if not done before, but the game has some troubles communicating it to the player. Most of the detailing of the story takes place in the journal of the character, and while there is exposition during missions, it tends to be disjointed and hard to follow. Your character never actually says anything, and is relegated to a spectator role as the rest of the people in the game chatter away, leaving you to the simple task of shooting down the bad guys.

The actual space flight is, of course, where the game matters. The game is divided into missions, which are each divided into a number of sections, which you'll have to do one after the other to proceed in a very linear fashion. Before each mission, you begin in your ship, where you can check logs (where you'll find almost all of the game's story and information about various matters), statistics, and upgrade your ship. Then you're off into the fray.

Each mission of the game is fairly linear, even more so than other games in the genre. There's the standard objective plan, where objective A won't become available until objective B has been completed, but it goes further than that. If, for example, you're to take out a few mission-critical objects of the same type, not only do you have to destroy them all in order, but until the game specifically tells you to, you can't even select them as a target. In one mission, for example, you need to wait until allies reach a group of generators before enemies appear, then you have to destroy those enemies before the first generator becomes damageable.After destroying the first generator, you're allowed to destroy the second. Before you're allowed to damage the third generator, however, you need to attack a wave of enemies first. Then it becomes destructible.

This system of objective-based gameplay makes the game feel extremely constrained. Additionally, if you're replaying the level over, having to do everything in order despite knowing exactly what to do can get frustrating and pointless. Compounding to this is the ability to lose the mission immediately by varying from your mission objectives. This can happen even when chasing an enemy fighter that is one of your objectives. What doesn't make it any less irritating is that you're forced to watch the beginning cutscene to your current mission when you start over, and after a few deaths, this can quickly become old. The inability to rush ahead and attack future objectives, especially when you know what you're supposed to destroy, makes it much, much worse.

What isn't set in stone, thankfully, is the customization of your ship, and is probably the strongest point that Tarr Chronicles has going for itself. Before each mission you can enter your hangar where your ship awaits. It is here when you can customize multiple facets of your ship: change the armor, shields, hull, weaponry, and more to give yourself the kind of fighting ship you want. As more missions are completed, more equipment becomes available to you, but you're also given the option of creating your own special devices. After each mission, you can disassemble up to three pieces of equipment you own in order to add to a pool of technological resources. With these resources you can build special equipment that confers a range of bonuses such as boosting your shield recharge rate, adding to your armor, or absorbing damage. Of course, you'll need to keep within boundaries. Certain equipment adds to your ship's weight, which needs to be kept within the range specified by the hull type you select. Likewise, the types of weapons, shields, and the special equipment need to conform to energy levels allowed. It's a varied system, and a much-needed one in a game that constrains many other aspects. Of course, if customization isn't your thing, there's always a button that will automatically place the best upgrades on your ship, though they might not fit your kind of playing style.

The mechanics of the game leave a bit to be desired, but they get the job done. Your ship handles pretty heavily, and that can't be changed by your customizations. The AI of your allies and opponents work well, but you'll still be doing most of the work. Still, you'll be seeing your allies' ships taking down the enemies from time to time, and though it still feels like you're a one man army, at least you have a bit of backup. The aforementioned constraints in the gameplay do hinder how realistic the galaxy feels, however. Large capital ships may be battling it out in front of you, but it feels more like a spectator sport. You can't attack them, you can't defend them, you can't even get hit by the lasers that travel back and forth between them. As such, the game tends to feel a little flat in some areas.

The graphics, at least, lend a little depth. The landscape of space is colorful and full of life, so you'll rarely be looking at a dull star-speckled void, though the ships tend to look quite similar to each other, making it hard to pick out which is which without a red halo telling you that you're looking at an enemy. The sound, however, doesn't add anything at all, limited to voiceovers that range in ability from good to robotic and the dull sounds of your weaponry firing. Enemies' attacks don't make a noise, making it difficult to know how much damage is being done to you without looking down at your shield gauge, and depending on the enemy ship, this might take just long enough to be destroyed. And then you get to watch the opening cinematic for the level again.

In the end, Tarr Chronicles would be an unremarkable space-shooter, except for the customization - there's just enough incentive to give it a look. There's no deep tactics or strategy, nor is there any mechanic that hasn't been done before elsewhere, but the story is interesting enough to keep playing, and the gameplay is good enough that you'll find yourself coming back for more. Though it may get frustrating at times and is a little slow paced, if you're aching for a chance to fly through the galaxy in a personally-customized flying canister of destruction, Tarr Chronicles might be the game to satisfy the urge.