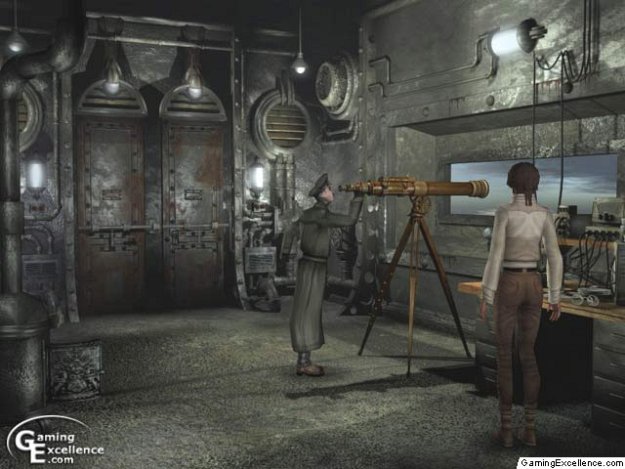 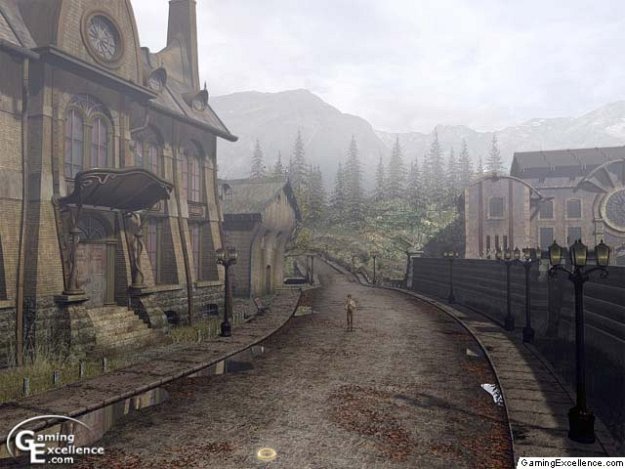 It has been longer than I can remember since the last extraordinary adventure game was released, a very rare incidence as the popularity of adventure titles has dropped drastically over the last several years. Microids have stepped up to the plate and nobody could have expected the results they would produce.

Developed by Microids, Syberia is a project entirely produced and designed in Canada. Microids is also the publisher of the title in Canada, while DreamCatcher Interactive's Adventure Company division holds the distribution rights in the United States. Created by author and writer Benoit Sokal, Syberia is in a sense derived from the Amerizone, an adventure title published several years ago. As a matter of fact, the Amerizone is actually referred to in the second world of the game, although this is the only actual reference made to the predecessor.

You are Kate Walker, a rising legal attorney from New York. Sent to the small European town of Valadilene, Kate expects to stay only a few days while a final contract is signed in the purchase of a toy factory, however she has not yet realized the adventure has just begin. The title opens on a sad note; Kate arrives in the small village during the funeral procession for Anna Voralberg, the woman in which Kate was to have sign the contracts. Kate soon learns of a mysterious heir to the factory, Anna's younger brother whom was thought to have died at a young age. Hans Voralberg is believed to be somewhere between Valadilene and Syberia; Kate must track him down whatever it takes. This is only the start of what is to be a long and engaging tale, a well-developed storyline combined with moderately challenging puzzles.

The first thing I noticed was the highly polished approach on the title, it is clearly evident that Microids took the time to develop the title to its completion rather than simply releasing patches to correct major issues after the fact. Although the manual is quite small, it contains a good insight into the storyline and background information, as well as a brief introduction to the gameplay of the title.

Syberia is a third person adventure title with a simplistic user interface allowing for easy access to objects. By moving the cursor around the screen, it changes reflecting what can be done and when an object can be interacted with. Whether it is simply a character that could be spoken to or an object of value lying about, the gameplay mechanics are simple and effective. Items are used without a problem from a simple menu, right clicking brings up the item list and an arrow refers the player to documents and conversations made by Kate. Players can then select or read each document as the situation warrants. As the storyline develops and progresses, the list of inquiries Kate can make when speaking with other characters will grow and each response from these characters is genuine and unique, another realistic and entertaining aspect of the title.

What is an automaton you ask? Simply put, an automaton is a robot that does not like to be called a robot. These automatons are found throughout each world, Hans Voralberg is the mastermind behind each creation. Syberia opens in Valadilene, a small mountainside village filled with beautiful sights and automatons everywhere. This quaint little village is an artistic dream, beautifully constructed buildings and an overall classical design. Next on the list is the University town of Barrockstadt, an isolated place cut off from the outside world. Komkolzgrad is the next stop on Kate's journey, designed to be the perfect interpretation of Communist ideology, now a run-down creepy environment centered around an old mine. Rust covered shafts and destroyed mining equipment lie about, not much can be done to restore this destroyed town. Finally, Kate makes her way to Aralbad, once a thriving hotel now lost to the obtrusive gray clouds overhead. The sea has completely retreated from the hotels once magnificent pier, left to the mercy of the salt. Each world is highly detailed and unique, each offering a variety of enchanting features and attributes.

The sound effects and background music presented are simply brilliant aspects of Syberia; the quality and atmospheric enhancement these add are breathtaking. The background music is simply beautiful, tunes to complete each environment and situation that arises, wonderfully composed and presented to say the absolute least. Combined with the background musical effects, the general sound effects are extremely lifelike and engaging, players will believe they are actually opening up the rusty gate or attempting to get that pesky machine to work correctly. Last but not least comes the vocal score presented in the title, another fantastic element. The wonderful voice acting is marvelous, engaging and a superb asset to the title. No adventure title is complete without a good combination of sound effects and background music, Syberia doesn't just meet these expectations; it vastly exceeds them in every way possible.

Sound effects are not the only thing Syberia has mastered; the graphical capabilities and environments presented are without a doubt some of the best-rendered scenes ever produced. The artists at Microids should be extremely proud of themselves as they have successfully created an extremely lifelike environment, not to mention the remarkable exture usage. The backgrounds are pre-rendered, however they do not lack interactivity in any way, objects move and the environments behave as one would expect in a real-life situation. Characters are modeled completely in three dimensions and are very highly detailed, and the general polish on the graphical models is seconds to none. Although the environments are presented as two dimensional bitmaps, a variety of realistic effects add much realism and general enjoyment to the title, the ripples of the water and the birds flying overhead just to name a few. Combined with the exceptional graphics, the cut-scenes that progress the storyline are extremely well presented and developed, easily comparable to the best in game cut scenes developed to date by any company.

The puzzles are often what will make or break an adventure title, and Syberia contains a wide variety of challenges to allow for an entertaining adventure. Players can expect the standard style adventure puzzles, finding keys and completing tasks to gain access to an adjoining world, as well as a variety of other unique tasks in which to complete. One thing that makes Syberia so enjoyable is that the puzzles are not exceptionally difficult, yet they will leave the player with some feeling of success when completed. Taking a few minutes to think and using basic logic to progress can solve most of the puzzles in the game. The only complaint I have regarding the puzzles in Syberia is that some of these seem somewhat mindless and appear to have simply been added to extend the life of the title, other than that there really is no other problems with the overall gameplay.

There is no doubt that Microids have succeeded with Syberia, it is quite possibly one of the greatest adventure titles ever produced. Everything from the absolutely gorgeous graphics to the marvelous sound effects and enchanting background music are near perfect. Experienced adventure gamers can expect approximately fifteen hours of gameplay, however these hours will be filled will entertainment and curiosity as the story develops. Syberia is a must have for any fan of the genre, and even those not fond of adventure games should give Syberia a try, you may just be surprised at how entertaining they can be.