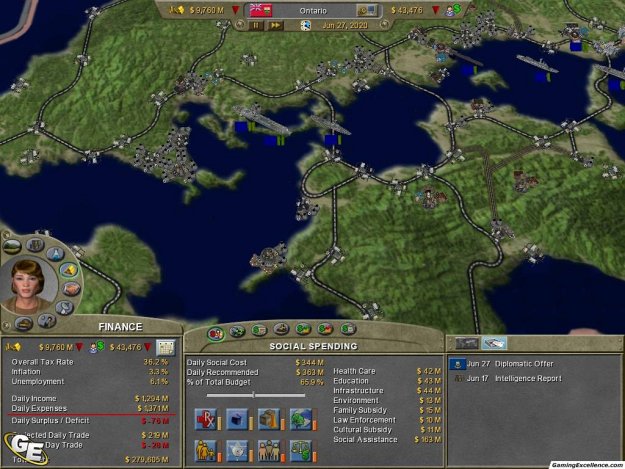 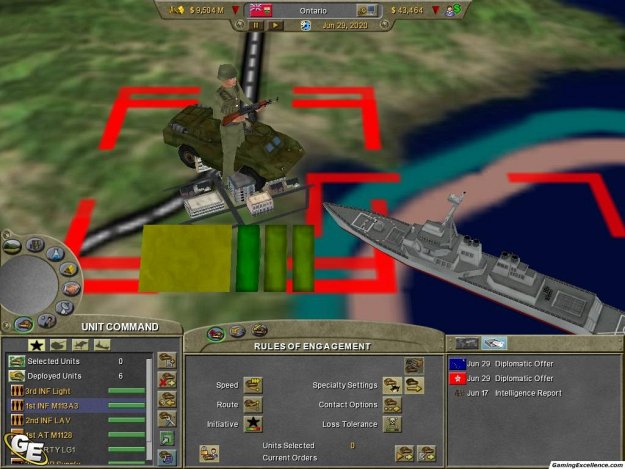 Supreme Ruler 2020 is the latest in the Supreme Ruler series by the Battle Goat Studios makers of another world-spanning strategy game; Europa Universalis. The basic premise of the game is that the player becomes the leader of any nation on Earth, from Argentina to Zimbabwe, and makes decisions that will lead the nation through a global economic crisis.

This is one of the largest, most ambitious, complicated and flawed games you will ever encounter. Picture SimCity on a global scale -- but with tanks; you will be responsible for your country's Politics, economics, warfare, trade, diplomacy, taxation, and building. Get ready to negotiate an alliance with Saudi Arabia or free trade with Manitoba. Your light infantry is ready to attack the garrison entrenched in Des Moines, Iowa should you wait for air support? It's truly epic in scope and freedom.

This all sounds fun until problems come up. Consumer prices for oil are too high or an ally is experiencing a chronic shortage of consumer goods. Now what do you do?

The 80-page manual mentions these problems but not how to solve them. Your government advisors might be able to help by providing information: Yes those gas prices are high, but offers no solutions on how to fix this solution. How about the tutorial? Completed in under ten minutes this tutorial mostly points out features on the complicated interface. Helpful, but it does nothing to help the price of oil.

Of course you can always take the easy way out and let the government advisor can take care of the problem for you. In fact the AI can take control of pretty much anything if you want to. Can't figure out who to trade for oil? Let the trade advisor do it for you. Don't know whether you should build a LAV III infantry carrier or a TOW anti-tank unit? The military advisor will be happy to decide your military production, and will even move your units for you. Where is the fun in letting the computer run your country for you though? It's certainly easy to put a country on cruise control and watch your citizens go to work, but then there is not much a game to be had.

To effectively control a country requires toggling through dozens of map filters and screens to find all of the information required to make an informed decision. It takes a long time to learn the interface that has about as many buttons as an airplane cockpit. There are 236 unique buttons in this game and that does not include the diplomacy buttons for the over 100 countries in the game. The learning curve is very steep.

Much like mid 90s flight simulators, Supreme Commander 2020 blurs the line between strategy and simulation. When zoomed all the way out, the view is beautiful, but as you get closer to the ground, where most of the game takes place, it becomes an ugly blurry mess. Units and cities might have been lifted from a first generation 3D game they are so blocky.

The music in the game is nice because it changes genres depending on the country you choose to play. North America treats the ears to a little rock and roll while the Middle East adds some Arabian styled tunes. But The warfare sounds are the definition of generic.

Alliances are an important part of the game and your virtual email inbox will be filled with alliance requests from the start of the game. Without allies your country is vulnerable to foreign aggression, but on the other hand an alliance can drag you into a costly war. Since the game takes the philosophy that if you can see a battle you should hear a battle, get ready to hear generic explosion sounds for most of the game as your allies battle their enemies half a world away.

The AI loves to fight, but it is not stupid. Wars tend to be predictable as regional tensions rise and then drag the rest of the world into the conflict.

The first game I played involved Japan dragging my country, Ontario, into a war with North Korea, and California and Texas launching a full-scale invasion of Mexico. The Mexico war eventually led to a shooting war between Ontario and Iowa. Unfortunately my three-pronged attack on Chicago was a failure and my army, air force, and navy were forced to retreat to Windsor.

Unit control takes some finesse and is the most difficult element of the game to learn. Knowing when to use your tanks or helicopters means the difference between victory and defeat. Unfortunately getting to know your units requires a careful study of their many statistics. Also military unit names differ depending on what country you play; So even if you do learn all of the stats and capabilities of the American units, you will have to learn a whole new set of units if you play as North Korea.

Deciding I wasn't good at being a general, I started a new game and decided to focus my energies on diplomacy and developing industry and infrastructure in order to make my country strong. It was all easy enough until I ran into this game's two greatest sins. The first is a bug that crashes the game when building new roads; the second is no auto-save feature.

The crashing, makes the game nearly unplayable. The lack of autosave, only compounds the crashing problem.

Another issue that comes up is a lack of direction. While there are scenarios and campaigns, they offer very little information regarding what will lead the player towards a "win" condition. This is a minor problem since the true attraction of Supreme Ruler is that is gives the player the ultimate control to shape the world as he or she pleases.

There is a game buried beneath all of the menus and statistics, but only the truly patient and dedicated will have the time or will to find it.