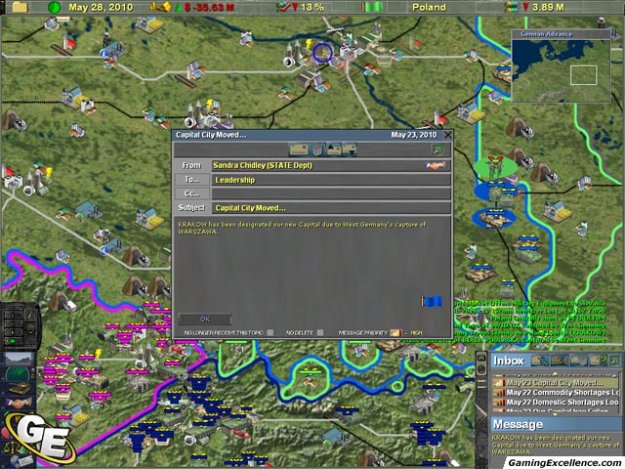 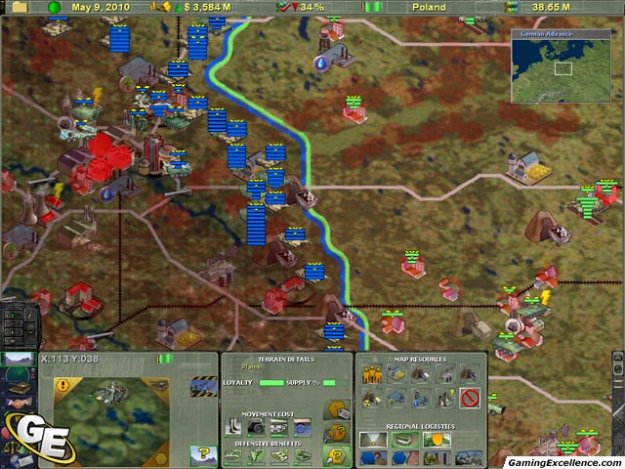 Supreme Ruler 2010 is the first PC game developed by Battlegoat Studios, and it is obviously targeting the gamers who live and breathe for in-depth strategy games. Micromanagement. The word describes the game in its entirety. But, if you are a gamer looking for a Warcraft-like experience, you had better start looking somewhere else.

Supreme Ruler is all about micromanaging a nation in the year 2010. The countries of the world have split apart into factions because of rising inflation, political issues and the like. The manual is very thorough in explaining the situation, as it takes 5 pages of the manual to cover the history leading up to the year 2010. Needless to say, the game's campaign deals with the reunification of countries under the watchful eye of the World Market, a new super power that rose from the ashes of what was once the UN. Please them; keep them happy, and you shouldn't have to worry about them 'dropping the bomb'.

The game covers almost every single gritty detail that you could possibly think of. Whether it's unit control, production, or simply managing your economy, you'll find yourself with a lot to do. This gives the player the sense of being able to control every single aspect of the country. This amount of micromanagement introduces so much complexity to a beginner, that the initial learning curve is extremely steep. Take unit control for example. In most strategy games, it's a simple matter of point and click. Here, you alter the units orders for movement, speed, attack, ordinance, etc. All of these options have a significant effect on that unit's performance in the field. On top of that, there are so many different units to choose from, that it is difficult to select the appropriate unit building strategy.

The game is not based around combat however, and is more about building up your military to defend your country. Even though you might start off with a lot of military units, rushing a neighbor can have disastrous, unforeseeable side effects. While you are pumping resources into your military and military facilities, your neighbors are increasing their economic output. Military units don't help the economy, and only add to your expenses. In the long run, attacking a neighbor will only decrease your popularity with neighboring countries. This makes it more difficult when trying to work out diplomatic solutions. In other words, a military is necessary, but needs to remain in balance with your economic production capabilities. Ignore one of the two factors, and you're either going to fall behind economically, or have a lack of military forces to maintain your sovereignty.

In order to simplify the micromanagement of the game, and to instill a sense of realism, the game includes cabinet ministers. Cabinet ministers can be assigned to different positions and be given different priorities. They also will react differently depending on how much they approve of your decisions, and to which office they are assigned. Imagine having a military general in charge of domestic wellbeing. Cabinet ministers can therefore run most aspects of your country by themselves. This give you more time to focus on diplomatic and military moves.

Cabinet ministers introduce one of the biggest issues of the game. They are so effective in doing their part, that your country can basically run all by itself. Speed up time, and you can watch your country go about its business based on the priorities assigned to the cabinet. I once left the game running at full speed and went to prepare a snack. After devouring cookies and milk while watching TV for half an hour, I returned to my game. About 20 days had passed, my facilities were nowhere near completed, and I had only a couple of messages from my cabinet ministers. If this is how the game is played, I might as well go grab another snack.

The visuals for Supreme Ruler are not all that impressive, but are done well enough to portray some sort of sense that you are running a country. The maps of the world are actual satellite photos courtesy of NASA, and the resource locations are as realistic as possible. Even the facilities and cities that you start off with in the game are meant to give a sense of reality. Though the game can be played on the map by pointing and clicking, it is actually easier to play the game by using the interface. The game interface is surprising well designed in comparison to the map and the units. For the amount of data and micromanagement that is present, the interface does a bang-up job. Its design is such that unnecessary data is not displayed unless clicked upon. Still, the amount of data is vast, and when a single unit's data fills up most of the screen, it is very easy to become overwhelmed and just ignore it. Units are unique in design, but simplistic in general. It is possible to zoom in and out with the mouse wheel, but this only useful when trying to click on overlapping units. Overall, the graphics are one of the weaker elements of the game. While the interface is well designed, it is difficult to overlook the map and the units.

There isn't much in terms of sound in this game. I found it was more enjoyable to play a CD while the game played itself, in order to help pass the time. The most impressive sounds shine when you declare war on a neighboring country. Immediately you can here the sounds of machine gun and tank shells firing, all of which overlap into a lot of noise. It becomes fairly noisy, but does present a good sense of conflict.

One of the options in the game is to play in real time or in turn-based mode. Originally this seems like a great idea; you can even set the length of time for each turn in a turn-based game. Unfortunately it didn't live up too expectations, as turn-based game play only stopped time at each interval. It didn't actually zoom to the next turn; you can even stop time mid-turn. I preferred to just speed up time and play in real-time mode, as I found that I could give commands on the fly at a reasonable rate of speed. Another problem is the range of speed. Because a nuclear reactor takes over a hundred days to build and a day takes about 1 minute at the fastest speed setting, it tends to make the game really boring. This only increases the urge to leave your computer for long periods of time and do something productive. Sure, all of this increases the game realism, but is it fun anymore?

Supreme Ruler 2010 is really targeted at a small audience, those people who are total micromanagement geniuses who love to do this stuff. The game presents the real world in such a believable way, but is not really designed for most gamers. It's definitely worth a look, if you've got the money burning a hole in your pocket. Unfortunately, it really doesn't mix with the general crowd, only a select few will enjoy Supreme Ruler 2010 to the fullest extent, and I can't say I'm one of them.