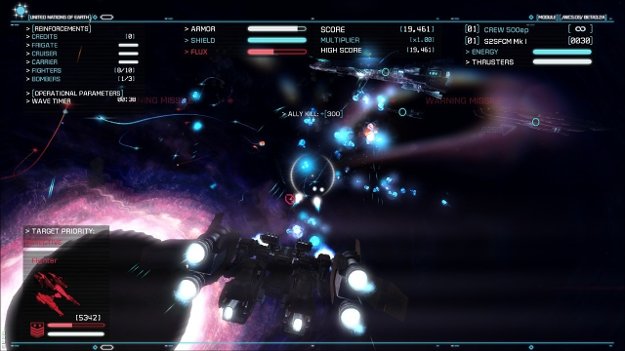 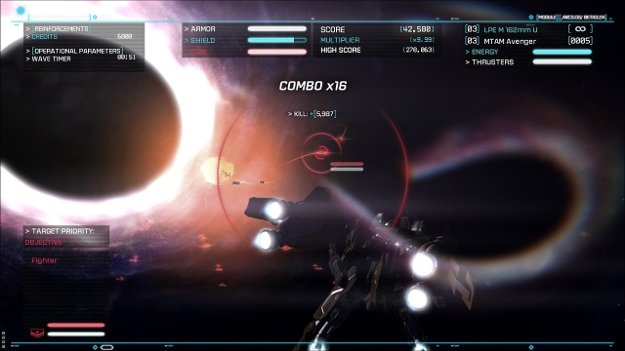 Strike Suit Infinity, a game about being in a space mech-ship and shooting things that are shooting you, delivers on everything it promises. That said, it doesn't promise much, but you'll definitely find that that it delivers regardless, with fast-paced action that doesn't relent and a series of mechanics that don't get bogged down in complexity.

If the name sounds familiar to you, then you might be thinking of Strike Suit Zero, the previous space-mech shooter in the Strike Suit series. While Zero came with a campaign to follow, Infinity goes the path of minimalism, stripping down almost everything from the game to leave you only with a score attack mode, facing you against waves and waves of enemies in mech of your choosing. You'll rack up points, multipliers, and credits in your struggle to survive against increasing odds.

The combat in Strike Suit Infinity is fast and frantic - a sphere arena is all the space you have (and need) to take down opponents that warp in from all sides. In your arsenal is a wide array of guns, rockets, missiles, and of course, the suit itself. The eponymous strike suit is a versatile device, giving you the ability to switch between the two forms of a jet (aka pursuit mode) and a more nimble bipedal form (strike mode). The strike mode, while slower, is much more easy to maneuver in multiple directions, allowing you to strafe  a frigate while raining down fire, dodge out of the way of bullets and locked-on missiles, and fire salvos of missiles at anything you lay your crosshairs on. And really, if firing three dozen missiles at everything on my screen isn't the reason to be in a giant bipedal mech in space, then I don't want to know what is.

The strike suit doesn't come free, however - not only is it much slower in getting from point A to point B, but it requires the use of flux. This energy, gained by taking down enemies, is drained whenever you fire your weapons in strike mode. So, while you can be quite powerful, it rarely lasts long, finding the right time to switch back and forth between the two modes for when different situations call for it is one of the cruxes of combat in Infinity.

You're not quite alone, though.  Between rounds, you're given the option to recruit squadrons to fight alongside you, for a bit of cash (which can also be spent upgrading the ships). These recruits only last for the round they're purchased in, so it's key not to go crazy with spending every round - that said, if they manage to make it to the end without perishing, you get a bit of your investment back, so it's in your better interests to make sure that they survive, despite the fact that having the enemy target something other than yourself can mean a few moments of breathing space which is just what you may need to recharge shields and take down a few opponents.

Strike Suit Infinity isn't a very complex game. It's nice to look at, and if fast-paced combat is your thing, then it's great to play. But it feels more like an extra mode, simply a part of Strike Suit Zero, than a full-fledged title in its own regard. On its own, it feels a little weak, but it does do a good job of showcasing the battle of the original title: running strafing attacks against frigates to take down their flak cannons, racing into a crowd of fighters to take them all down in a strike suit in a swarm of missiles, racking up huge combos and multipliers, all these are examples of some great moments in Strike Suit Infinity. The real problem is that those moments are all the game has.