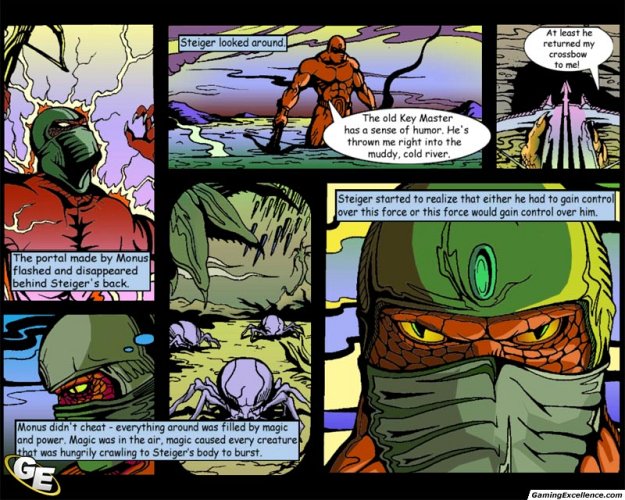 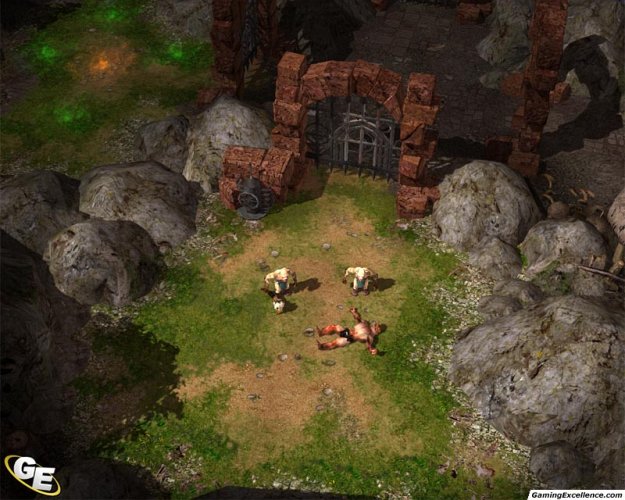 The strategy RPG genre is often one heavily saturated with new games on the PC. It's becoming more difficult every year to stand out among the crowd, yet that is what Fireglow is trying to accomplish with their upcoming North American release, Stranger. We recently had an opportunity to take a late build for a test drive, and have put together our impressions of the game from our brief experience. Does Stranger have enough content to captivate its intended audience, or will it get lost in the sea of releases this year?

The storyline behind the game is pretty straightforward. You control three main characters; falsely accused of a crime they didn't commit, and tossed inside a portal as punishment. You end up in a world known as Kront, and essentially battle to discover who committed the criminal acts. The game tells its story through a series of comic-style cutscenes, with a bit of lame dialog (and some overacting in the voice work). All in all a pretty standard story that moves the gameplay along decently.

Stranger is a real-time tactical strategy and RPG hybrid. Unlike most typical RTS games though, this one doesn't really focus on the battlefield as much as it does a small handful of units. In each map you are presented with a few main characters, and as you progress through the map you'll hire mercenaries to do the rest of the dirty work. It offers up a similar hack-and-slash style of play, and introduces a few interesting features along the way.

One of the more unique offerings of Stranger is the magical system. By killing enemies, you'll collect coloured gems, blue, green, and red. Each represents a different type of magic, for example, green represents healing and red represents battle magic. You give these resources to your units in combat, which will allow them to cast spells of that aura. By providing units with a larger number of gems, it allows them to cast more powerful spells. What is interesting however is by combining colours, you can produce cyan, yellow, or even white magic, the most powerful form found in the game. These combinations allow you to experiment with different types of magic, although each of the three main characters really emphasizes the use of one magical style. It should be noted that spells are cast automatically during combat, relative to the magical aura you have assigned to the character. As well, switching magic types on the fly is a bit cumbersome, thus and it makes more sense to do so in preparation for a battle. You'll definitely want to put a bit of time into setting up these auras prior to an attack.

As with any RPG-oriented game, you'll be focused on leveling up the main character. In Stranger, you can do this by leveling up one of any four skills, melee, ranged, craft, and magic. As you level, you'll be able to purchase feats that will augment a variety of abilities, such as making the character more proficient with a specific weapon, increasing their health, or giving them a wider variety of spells to cast. The way you go about leveling the character in Stranger isn't highly used in other games, and may take a bit of getting used to for fans of the genre.

Stranger also offers up a crafting system, which allows you to forge new items with gems and metal. It's a fairly unique system, and the more gems to add to an item the more special effects it will have (an example being an increased chance of casting a spell when the weapon hits). This is a creative little addition that adds a bit of depth to the game.

Graphically, Stranger isn't the prettiest game out there, in fact it looks a bit dated. The units themselves are a little bland, and while varying in design, they all seem fairly low in detail. The same can be said about the environments, fairly bland low-resolution textures, and even the water effects are a bit blocky. Fire and spell casting effects are decent, and some of the object textures are good, but that isn't enough to save the overall look of the game. Yet, oddly enough I didn't seem to notice the graphical deficiencies too much while playing. Luckily for the developers, it's the type of game where the graphics don't particularly impact the quality of gameplay.

Although we were using a near-complete build of the game, that wasn't to say there weren't a few technical issues that will hopefully be resolved either by release time or in a patch shortly thereafter. The pathfinding was an odd beast, sometimes it worked well, other times it didn't. On one occasion I had a character get stuck in a corner, and I had to wait for an NPC to move about thirty seconds later before I could get them out. Sometimes, spell casting effects seem to be off target as well, as in the healing aura appears a few feet off their target. Lastly, and most concerning, we noticed that on occasion enemy units seemed to move, and then freeze in one place while rapidly moving its legs, followed by that unit "transporting" to where you'd expect it to be. While I do have to re-iterate that this was an incomplete build, I certainly hope some of these issues have been addressed prior to the game shipping out next week.

Reportedly, the campaign will offer up about thirty hours of gameplay. As well, Stranger will ship with an internet multiplayer mode for up to eight players. Unfortunately, I didn't get an opportunity to experience this firsthand during my time with the game.

Stranger has a lot of potential, whether or not it is fully reached depends a lot on the development team and supporting the game post release. With an interesting magic and crafting system, and a decent story, North American fans may find that Stranger satisfies their craving for a solid hack-and-slash experience. If Fireglow can have a few of the technical issues ironed out, the game will be in much better shape and would better help welcome fans of the genre into the fold. We'll know for certain in a couple of weeks when the game hits retail.