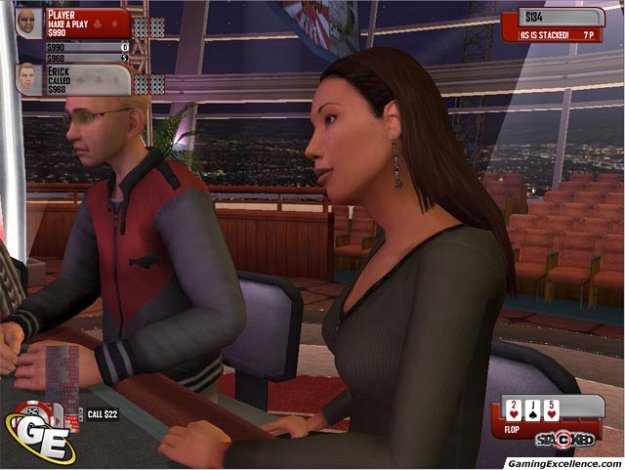 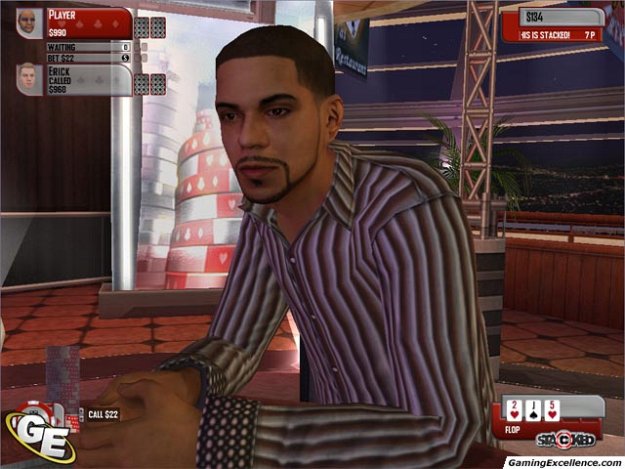 After months of anticipation, delays and hype, Stacked with Daniel Negreanu finally hit the streets last month. Available on Xbox, PS2, PC and soon to be released on the PSP, fans are able to play with the all-time money winner in the history of Texas Hold'em poker Daniel "Kid Poker" Negreanu. It's a game based off the highly popular variant of poker called Texas Hold'em which has taken off by storm in the recent years. Texas Hold'em is appearing just about everywhere now; TV, the internet, gaming, you name it.

Stacked with Daniel Negreanu, allows players to learn how to play Texas Hold'em the way the Pros do. With the help of Daniel's poker school, a player can learn the basics of Texas Hold'em and its strategies. Once you've understood the basics, then you get to play against Pokibot, the most advanced Artificial Intelligence system ever created. Pokibot is an AI created at the University of Alberta, one that supposedly adapts to the style of play you use and changes its strategy to constantly oppose/challenge you.

Upon start up, you're asked to create and customize a player profile; you get to choose from a rather poor selection of player skins and clothing. Once done, choose whether you play local or online play. One thing I have to point out is that if you own a copy of Stacked for your PSP, you'll be able to save your character's winnings and sync them up with your PS2 version and continue playing from there, as described by the developers. Stacked with Daniel Negreanu allows you to play Multi-Table Tournaments (MTT), Single Table Tournaments (STT), or Cash Games, with Limit or No Limit Hold'em. No matter what game-type you pick, you're then tasked with deciding what skill AI you'll play. This seems wrong, in a game like Texas Hold'em, where everything should be random; you shouldn't have to pick how good your AI opponents are. After all, you make the best poker hand with the cards that come up. But regardless of what I think, you still have to choose. So what's next you say? Well you sit down at a table and wait for cards to come your way.

In Stacked with Daniel Negreanu, you get to choose to play in some of the nicest casinos around. The locations look good, backed by some cool lights, but unfortunately not much in the ways of real casino sound; this game kind of makes you feel like distanced from this wonderful environment. The game allows you to play in either Point Of View mode (POV) or a kind of table top mode. Point Of View mode allows you to see your opponents as if you were sitting on your chair around the table. Table top mode gives you an over head perspective of the table, from the dealer's side of the table and the camera moves to point at the player who's deciding on his hand.

When the play gets started, the first and most noticeable problem (unfortunately) is that the look and quality of the cards being dealt are weak at best. In a poker game, which is based entirely on cards, you'd expect a decent level of design and quality. This game fails at both. This seems to be one thing the designers left on the drawing boards and wasn't brought to the table. I don't understand how this game made it to production without this being addressed beforehand. It's not rocket science they're dealing with, its simple graphical technology that has existed for years. The developers should be ashamed for overlooking this issue. And yes, it's one glaring mishap that you'll constantly be staring at.

Gameplay is fairly good, the AI seemed to offer enough challenge. There are a few things that I did notice when I was playing, like the fact that in almost all new rounds one AI player would go all in. I was playing in a multi table tournament and it didn't take to long for my pot to grow from a mere $1000 to a whooping $30,000. At this point I decided it was time to increase the AI level. Pokibot was described as the most advanced AI system that adapts to my playing style, and yet I seemed to have its number, most the time. I'm not claiming to be a good poker player, but I find that it's hard to gauge your skill when you first start this game. I'd been playing for about one hour when I realized that I had to bump up its skill level. That means I had to quit a good winning streak and start all over again.

When playing the game, they give you all the standard poker moves that you'd expect; Check, Bid, Raise and Fold. They've also added a system were you can smile and frown at your opponents. I'm surprised that this feature was even developed; the concept is decent, but seems out of place. Unless you start the game using these things, it seems pointless an hour into the game to start use it. I guess 5000ft games had to spend their card design budget on something, right?

During gameplay, you'll sometimes get a flashing message that says: A Pro tip is available. This means that Daniel Negreanu has a tip that he can offer up to help you in this situation. For example, if I was dealt a pair of 4's, before the flop came out Daniel had suggested that I be careful for pre-flop raises and that it would be best to fold this hand. It's not a suggestion, but it certainly doesn't mean you should play by his sayings. I can also see how his advice could be good because sometimes you forget about stats; you have to remember that this game teaches you to be a better poker player. As you progress through the round the game shows you your hand strength and your win percentage chance. That's a really nice feature that lets you learn what the odds of you winning the hand really are.

This is definitely one of the better poker games available on the consoles. It stays true to its name and what it was built on, Texas Hold'em. It doesn't introduce silly modified rules, or mini games to amuse you, when really it does quite the opposite in most cases. I must congratulate them for sticking to pure Hold'em.

As for the music in the game, well there is one track in the poor menu system, but other than that, if you've come to listen to music while you play poker alone in a dark room, with not a person in sight, you've come to the wrong place. As for voiceovers, they get repetitive and boring; throwing out the same one liners over and over. Not fun!

I can't say I'll be playing this game often, because I find the pace of the game is too slow. Until you've decided and played your hand, the Pokibot is extremely slow. If you're used to Internet Hold'em play, this game seems quite boring. Let me offer you a Pro tip: you can either pick up this mediocre to decent poker title on the consoles, or simply play online using the computer you are sitting in front of, and have faster-paced and more enjoyable challenge. Take your pick.