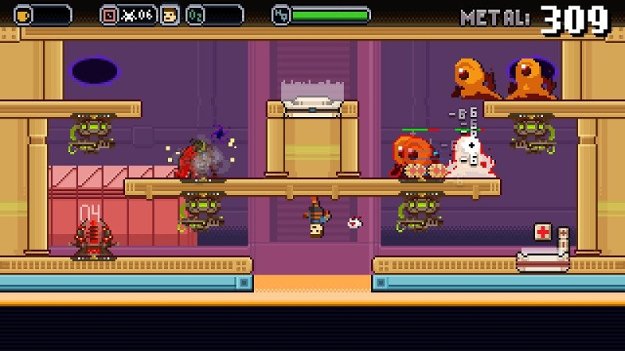 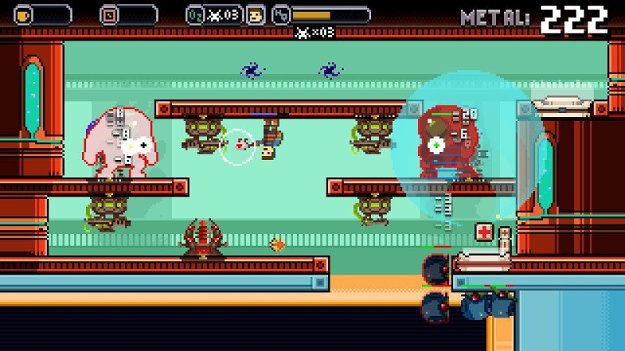 The indie game scene always seem able to put little twists on established genres, small (okay, sometimes large) changes that make a fairly well-explored convention different again. Spacejacked is one of these games, a tower defense title that blends platforming, shooting, and, of course, tower defense as you race to defend your ship against encroaching waves of enemies.

The game's goofy story is mostly just an excuse to have enemies attack your ship - and since all you have is a puny little gun that quickly is outclasses by everything coming at you, you need to build turrets to stop them all. There isn't a lot of variety in the turrets at all, unfortunately, and most of the strategy comes from deciding where they go and how to upgrade them. There's a twist though - there are mulitiple areas to defend, and really not a lot of resources to defend them with. 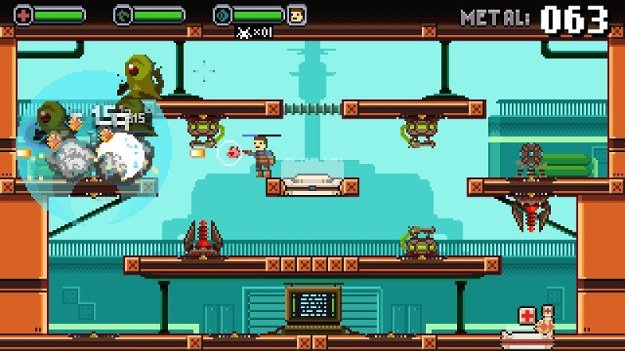 Luckily, Spacejacked lets you get 100% of the metal used to build a turret back when you sell it. This means racing back and forth between attacked locations, selling on group of turrets to get the funds to build up another. This adds a layer of frantic choice in the game, as there's no way to pause and survey the battlefield, nor is there much time to do what needs to be done between waves.And like I said before, you have a little gun to help, but it's really there as a companion piece in your quest to stop the aliens from destroying your ship components. Though it's pretty easy to find something of an 'optimal' turret placement for the levels, as they don't change particularly often...extremely rarely, in fact.

Importantly, much of your work stays with you between levels - this means that any metal you've obtained remains with you, and any part of your ship that's damaged stays damaged; repairing that consumes metal at a rate that I would describe as 'unpleasant'. You can also play a minigame, essentially a really simple sidescrolling shoot-em-up, to get more resources. I really wasn't a fan of this. It's more or less necessary to get enough metal to fend off the next waves, but since every scrap of metal you earn is cumulative, performing badly in this a couple times feels like it can really bite you in the butt later.

With all this, including a gravity-switching mechanic to move around similar to games like VVVVVV (where, instead of jumping, you simply reverse gravity to fly up to the ceiling or back to the ground), and a challenge mode to play when you're done - or tired of - the story, Spacejacked is an interesting, albeit short, tower-defense game that's kind of fun to play through. It's not great, and certainly can get a little dull from time to time, but is certainly worth a little jaunt.