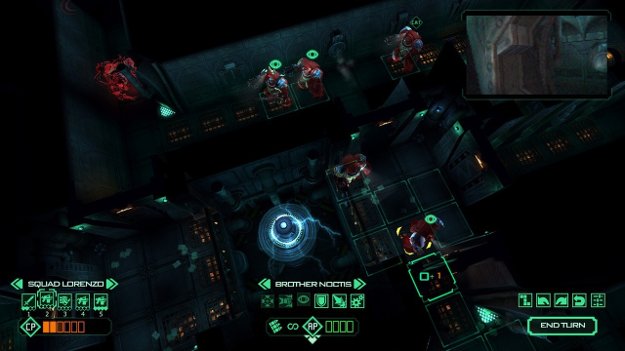 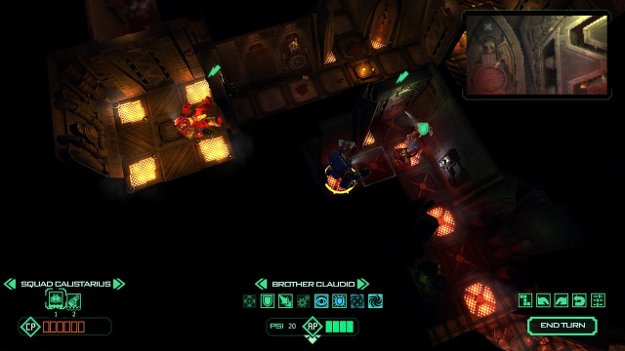 There isn’t much of a plot to Space Hulk per se – it’s really more of an excuse to have a group of Space Marines, hulking genetically engineered warriors, battle an alien menace aboard derelict space ships coincidentally known as Space Hulks. In the past the Blood Angels suffered a rather nasty defeat the hands of these aliens, known as Genestealers. These four armed, insectile beasts have claws that can shred through a tank like tissue paper so the marines must bring their most powerful armor, the Tactical Dreadnought Armor, to stand even the remotest of chances. Now that the Space Hulk, the Sin of Damnation, has been located they seek to plunder its secrets, clear it of the Genestealer infestation and regain their honor. 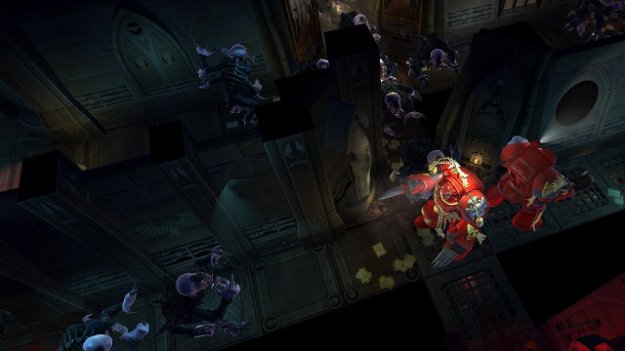 At a first glance Space Hulk may appear to be a tactical shooter in the veins of X-Com Enemy Unknown but that’s not entirely correct. The whole game has a much slower, more deliberate pace - Units can often only move between two to four spaces in a single turn, less if they plan on shooting, turning or reloading a weapon. Want to have someone on patrol to shoot enemies as they charge? You’ll need to leave action units for that so that means less movement all around.

This is due to the bulky nature of the equipment that the marines are using and this is a key component to the game that you must learn to manage. There is a balance here between the marines and the Genestealers. The marines have guns and can rain hell from that distance. The Genestealers have only their rending claws so they must close the distance to do any damage. But once they do so your marines will die damn fast. Conversely since the Genestealers must charge your position that means they’re often rushing through a fusillade of gunfire. Unfortunately they move damn fast, sprinting around corners and leaping onto your people in the blink of an eye if you aren’t careful. Essentially you pretty much need to play the game sow and careful, watching your back at all times or you’ll find your marines dying as they get cut down without a chance to fight back.

Space Hulk is based off the board game of the same name and it uses what is more or less a direct translation of those rules. As such everything is determined by dice rolls which can bless you by avoiding enemy attacks or damn you by having your guns constantly malfunction. Should your gun overheat while a spree of Genestealers charge your position and your gun jams… well I hope you weren’t attached to that marine.

Luckily all of this can be mitigated by simply playing smart and that’s where the game really makes you feel like a winner. Since you can tell where enemies are coming from, since they initially show up as blips on the map outside of your sight radius, by properly positioning your people to create kill-zones or using your flame thrower to drop a wall of fire that will block off enemy attack routes. 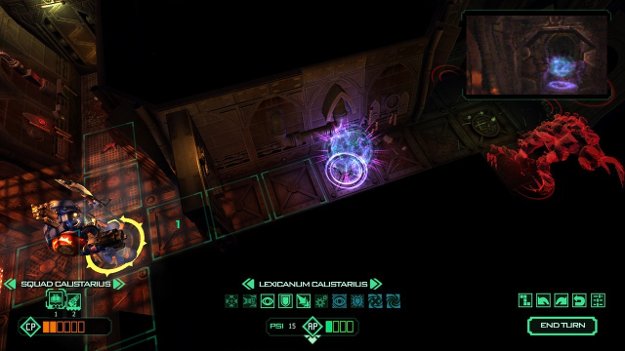 For your money you get a few prologue levels to teach you the ropes and twelve levels of the Sin of Damnation campaign that takes about four hours or so to clear (less if you’re damn good at the game). To blunt this lack of content there is a multiplayer mode that lets one person control the marines while one controls the ‘stealers. Playing as the Genestealers is actually a really novel experience as you need to use misdirection and throw overwhelming numbers at your foes to deliberately force their weapons to malfunction so you can cut them down. It takes a whole new skill set to win in a multiplayer game, especially since player-controlled aliens are much tougher than the computer controlled ones.

This multiplayer mode is unique in that not only can you go online to play with other people but you can also play hot-seat, two people taking turns playing on one PC. It’s not often you see same console co-op in a PC game but it’s a really nice addition.

Unfortunately that’s all there is to the game. What makes the Space Hulk board game so awesome (even at its often overinflated price tag) is that the game never ends. Once you’ve finished playing the official scenarios you can create your own and that’s where the fun really begins. You can create some massively insane games with this scenario creator, such as intense base defense missions that have you killing hundreds of genestealers, or missions that are basically one or two man runs through enemy infested territory – there’s just a wide variety of things you can do with it. And none of this is present here as the game entirely lacks this scenario creator. With that this would be a damn near perfect recreation of the board game in a cheaper, more affordable form but without it the whole package just feels incredibly thin.

Many people have complained about the graphics in this game and, to be blunt, these people are silly. Space Hulk isn’t meant to be a graphical powerhouse and anyone expecting that out of a small, independent game developer is seriously deluding themselves. The graphics are pretty good in either case – while they don’t approach the quality of X-Com, and the characters seem a bit on the squat side they still look pretty damn good. The primary graphical issue the game has is stuttering when an attack is initiated which leaves sounds and animations fully out of synch.

Another complaint that seems to be bandied about is the price tag. Thirty dollars is a bit steep for what you get here but giving players the scenario creator kit shouldn’t be too difficult for the developers, even if it is released as DLC. Even without that though… buying a new copy of Space Hulk runs you about $250 to $300. It’s still an immense value if you’ve ever been interested in owning Space Hulk but haven’t been able to justify that price tag.

Space Hulk could really do for either having a price drop, somewhere in the $10 to $15 dollars, or having the aforementioned scenario editor released. If there is anything to be said about this game is that there’s a lot of potential here. From the fun that can be had with a friend, or even random stranger online, to the possibilities that could come from a community of fan submitted scenarios Space Hulk could grow immensely. In that potential I see greatness and what we’ve got right now to tide us over is none too shabby either.