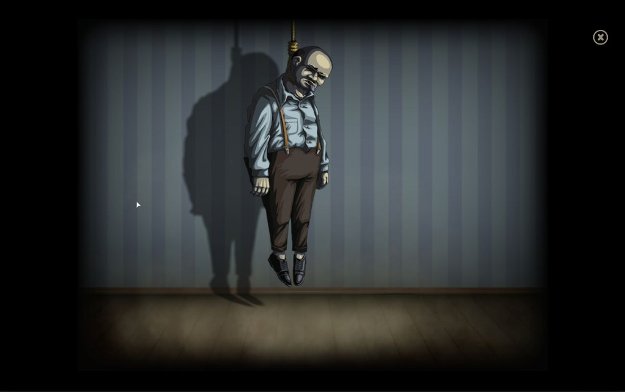 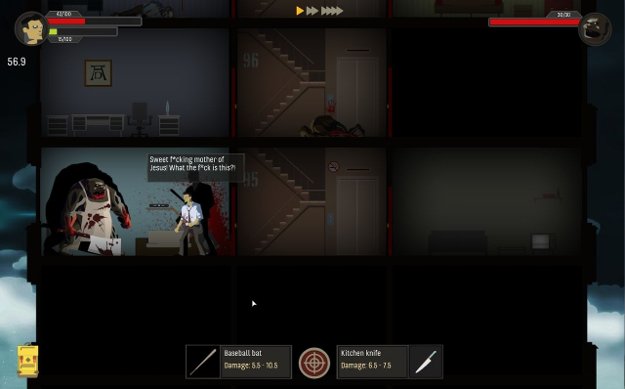 In Skyhill, you play a dazed and somewhat confused hotel guest who's decided to treat himself to a state of the art hotel suite, complete with a bio defense system to stave off what once can only assume are now a well know threat; mutants.  As you settle in for the night, alarms start blaring and your comfortable hotel room turns into what will now be your tomb if you don't do something about it and fast. Welcome to Skyhill!

As a guest on the 100th floor of the building, you have to make your way down all the floors to escape, fighting against all the odds to survive. Sounds fun, doesn't it? But don't worry, you don't have to make this journey without any tools at your disposal. As you travel, you can search the stairwell of each floor, along with the two rooms on each floor for items, weapons and food which you can use to help you survive. Because of course, with every step you get hungrier and hungrier. And items, because who knows when you'll need a wire to repair a broken elevator shaft to help you move further down the hotel.  And a kitchen knife because...well, because of the mutants, of course. 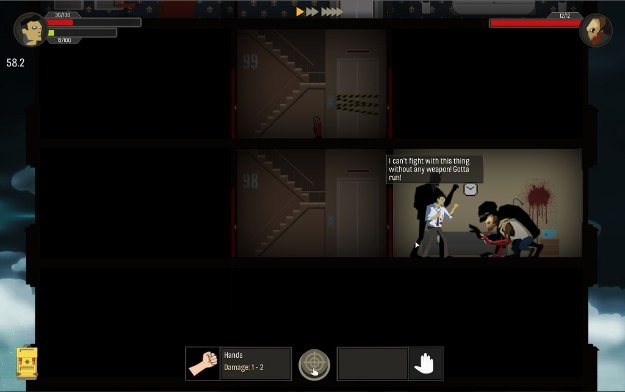 Skyhill also features a combat system where you face against and have to fight several different type of mutants in order to survive. Sometimes you can run, but of course by doing so, you give them the opportunity to get a cheap shot in, which just injures you and you may or may not have a healing item in your backpack to help you out. You may be able to go up a floor and take the elevator down past them. But if the elevator above you or below them is broken and you can't use it to get around them and they're standing in the hallway, then fighting is your only option.

Fighting is turn based, so each of you gets to plug away at the other. Don't worry about not getting a shot. You can either just hit them and do a base amount of damage, or you can try for an aimed shot. Each of the monsters has target areas on their bodies which you can choose to specifically try to hit. Certain areas are harder to hit but do more damage. If you manage to get a shot off on one of these areas, then you'll kill them faster. If you miss, then you just get your face punched in more and increase your chance of dying before the fight ends. 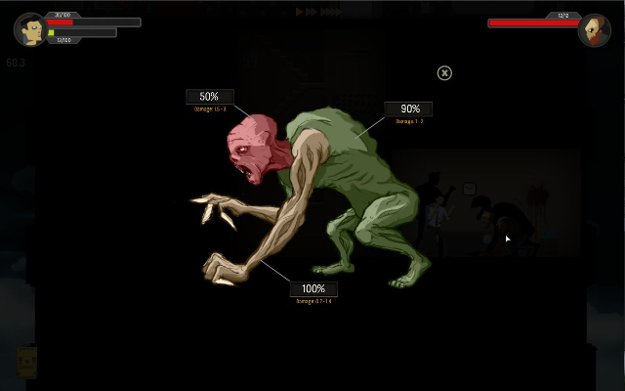 As far as weapons go, you mostly scavenge what you can from the environment. Knives, sticks, stilettos. You can make more advanced weapons at your workbench in your hotel room on the 100th floor and you can upgrade your work bench so that you can make even better weapons, but that depends on you having scavenged the necessary parts in your run to have done so.

Food works much the same way. As you progress, you get hungry. You have a food meter that you have to keep filled and if you don't and get too hungry, you start taking damage. Take too much damage and you die. You can find food in the environment, some of it good and some  of it likely to make you sick. Food items can be combined so that they satisfy your hunger more, such as in combining items to make a sandwich. There's a small kitchen in your room that can be upgraded so that you have the ability to make better food items, once you've scavenged the necessary parts.

If your health gets too low, you can sleep for the night to heal, sacrificing your food bar for your health. But because this is the mutant apocalypse and they know you're in there, bad things can happen to you in the middle of the night. There's a random chance of bad, violent things happening to you in the middle of the night to hurt you and negate some of your health gain. By upgrading the door to your room you lower the chance of bad things happening and by upgrading your bed you increase the amount of healing you can receive when you sleep. Both of these things are increased by items found while scavenging the floors.

In addition to these systems, Skyhill gives experience for every enemy killed. Once enough experience is granted it can be funneled into four skills: Strength, Dexterity, Speed and Accuracy. Each of these skills is designed to make the fighting experience easier and each of them is also tied to certain types of weapons. Characters also get active and passive perks the further down into the hotel they get. Passive being active all the time, Active needing to be activated. One of the passive perks makes it so that your character always gets to hit first in a fight. One of the active perks is a lock picking perk that can be activated once every 100 turns to allow you to pick a lock in the hotel.

The ideas behind Skyhill are great. You play the game, get as far down into the hotel as possible, rinse, repeat. The game randomly generates items, rooms and enemies every time you play so it's never the same experience twice. It seems like it'd be an awesome game to play and keep playing over and over just for fun and to see how far you could get every single time.

However, the combat and mechanics of the game need some refining in order for the game to meet it's real potential. The game is expecting you to search and explore floor by floor in order to get the full experience, yet I found that I wasn't able to actually escape unless I took the elevator as far down as possible, fixed the broken panels, searched for just enough food to survive and only fought when I had to. It killed half the experience because it took out the exploring. I had a lot more fun when I was exploring the game, but the random element actually made it difficult to do so because of the balancing in the game.

Many of the enemies past the very basic type are a lot stronger than your character. If they generate inside of a stairwell and you can't get around them, you could very well end up stuck and unable to continue further down into the hotel. You may find yourself at a standstill and unable to proceed further into the game because an enemy is blocking your path and no matter what you do, you're going to get killed in a very short fight because they are that much stronger than you and you didn't find good equipment or the things to make good equipment because nothing good was generated into that run through.

And because none of your upgrades or skills carry over from one playthrough to the next, you start at square one each and every time. While that may be an accepted staple of many rogue likes, it's a little hard to have in a game where there's a home base that the character is expected to use and be able to upgrade. Two of the perks try to address this issue; one of the perks randomly upgrades a home base object and one of the perks automatically upgrades your bed and door to level three. But as far as perks go, they're not the most useful in a long term run. Not when compared to the other perks that could be taken. And to be fair, there aren't too many perks that are as useful for staying alive. When I had to choose, those two were on the bottom of my list.

So while I enjoyed playing Skyhill very much, I found myself getting frustrated with the balancing issues with the enemies and with the random generation issues. There were some runs where I could get pretty far before getting gruesomely slaughtered. Some playthroughs it felt as if the hotel was laughing at my plight while purposefully throwing every obstruction in my path that it could. And because of the random generation, you could easily end up getting screwed against a wall. So with a little tweaking of the enemies, the combat and the systems itself, I believe the game could be a lot of fun. It just needs a little more work before release.