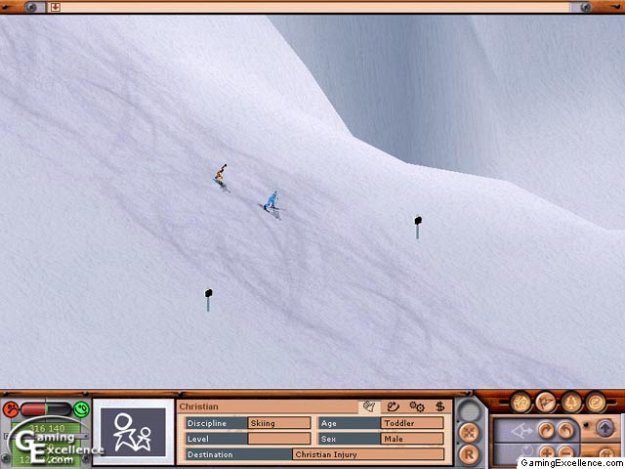 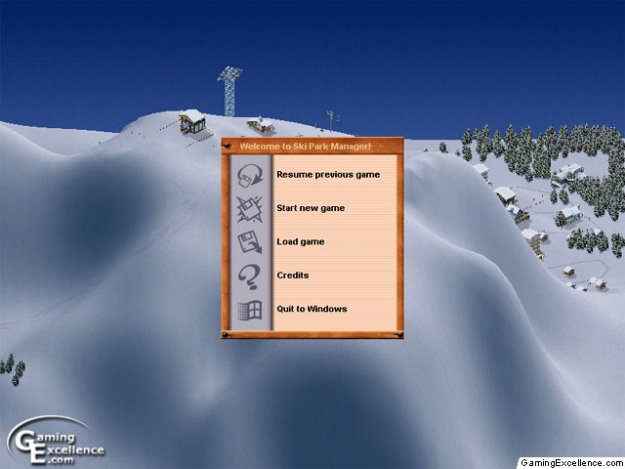 It's hard to believe a title by the name of RollerCoaster Tycoon started the trend back in the late 1990's. The first extremely successful management simulation has spawned many similar titles; often these have proven to be successful. Ski Park Manager takes this approach at a management simulation, but unfortunately, falls a little short of its intended goal.

Ski Park Manager was Lankhor's final title before they closed permanently, the developer best known for popular games such as "Warm Up!" and "F1 World Grand Prix." Ski Park Manager offers the basics of a management based simulation, but is probably not how the company wanted to go out.

I have personally been looking forward to this title for a while. As an avid alpine skier, the opportunity to develop, design, and manage a successful ski resort offered some appeal. Installation and launch went flawlessly, and a wide variety of single player maps are available for use. Unfortunately, the title does not offer multiplayer support, but one would not necessarily expect it in this type of game. Players start by selecting one of the locations available in the single player menu, the difficulty of that map is indicated by the number of positives next to the title. Once the scenario is launched, you are in business.

The map has just been launched and you have taken a brief tour of the terrain. Now, it's time to build a ski slope or chairlift, unfortunately this is where the trouble begins. The terrain can be completely modified using the landscaping features, but unfortunately, the navigational interface is very awkward to use, especially when constructing slopes or ski lifts. Once you have developed the resort, the staff is required to operate the lifts and take care of your visitors. Staff members are divided into numerous categories, ski lift operators, medical personnel, maintenance workers, and several others. Each staff member hired has a different level of skill for their particular position, and this skill level can be upgraded by training them more specifically for the job at hand. The staff members are responsible for maintaining a healthy balance within your resort, medics to assist wounded skiers and ski patrol's to prevent avalanches from occurring.

The graphics presented in Ski Park Manager are nothing spectacular, some aspects are mediocre at best. The visual detail is quite disappointing, as Lankhor has often been known for putting exceptional detail into their titles. Although the buildings and environments are generally well rendered, and the snow effects are intriguing, Ski Park Manager doesn't offer anything groundbreaking in this department. Characters lack any major detail, and buildings can become pixilated on closer zoom levels. Unfortunately, numerous clippings issues play into the graphical problems as well, as on occasion, the ski hill may intersect with a lift. Although this is simply a graphical glitch and does not affect the game in any other way, it can become awkward to look at and navigate, and appear somewhat unappealing while playing the game.

The management aspect of Ski Park Manager is well balanced and provides a solid foundation and realistic values. Players begin each map with a predetermined amount of money in which to construct buildings and ski runs. The balance is well achieved in this aspect of the title, as prices can be adjusted to meet sales requirements and players must successfully prepare an economic balance to be sure income is greater than expenditures, and maximize profits and efficiency. A large number of graphs, charts, and statistics are available to assist the player in managing the finances, one of the better aspects of this title. Along with these charts, a variety of other graphs are available presenting visitor satisfaction and entertainment, assisting the player in determining what needs to be constructed or modified to keep the customers happy.

The sound effects and musical score presented in Ski Park Manager are satisfactory for a title such as this. As visitors take to the slopes, the ski lift can be heard operating in the distance, and the occasional yell of a visitor as they fall to the ground is common. Snowstorms and machinery also offer a variety of sound effects, and although they are unique and entertaining, a wider variety would be greatly beneficial. Along with the sound effects, the musical score included in the title is somewhat unique, and can become very repetitive at times. Other than these issues, the sound effects and musical background presented in Ski Park Manager are well developed.

Research and development plays a key role in the advancement and entertainment of visitors, as newer technological breakthroughs can increase the value and efficiency of your park. New buildings, ski lifts, and other advancements can become available over time. However, these advanced technologies cost a lot of funding to develop, and can send your resort into financial ruin if not carefully balanced.

Ski Park Manager doesn't just offer visitors the chance to ski, snowboarding and even a children's playground are available for use. Anong with alpine skiing, players are given the opportunity to setup trails for cross-country skiing and even sledding. Each visitor that enters your resort has a unique personality and enjoy different forms of entertainment. Whether it is a slow calm ski on a moderate or easy slope, or skiing on the edge of control on some of the most difficult slopes, each visitor will enjoy different aspects of your resort. This aspect of individuality is similar to that found in RollerCoaster Tycoon, and is an excellent addition to the title.

Overall, Ski Park Manager is an entertaining title for anyone who enjoys the management simulation genre. The title could have been better, as the navigation can be very awkward at times and unfortunately, affects the general gameplay. With a wide variety of scenario's available and a solid management background, Ski Park Manager had the potential to be a superb game, but unfortunately the target was just missed.