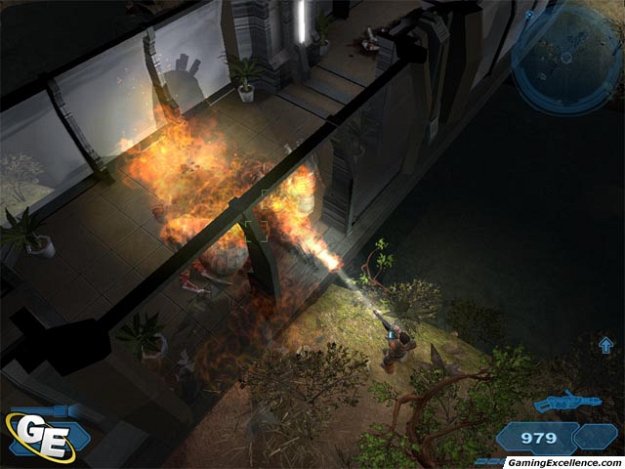 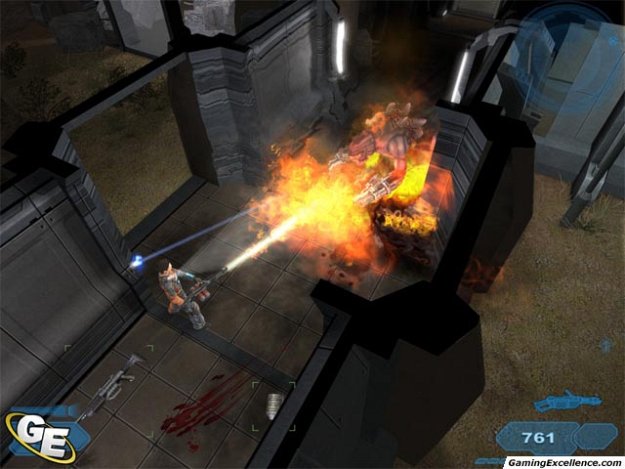 Set on one of Jupiter's moons, Ganymede (made habitable in the optimistic year of 2050), you'll take control of one of the mechanics on the base, an ex-soldier named Wesley Tyler. As usual, what turns out to be a routine maintenance task of restoring the power thrusts you into a battle with all manner of monsters and aliens as you struggle to survive your way through battle after battle in what looks to be an alien invasion.

The gameplay is something I haven't seen in a while, a top-down walk-around shooter. You'll see the action from above, aliens approaching from all sides. The camera can feel extremely restrictive at the beginning, since it only shows what's in front of Tyler (moving the mouse turns Tyler and the camera), but since the options give you a lot of flexibility in the camera and controls department, I had myself ready to go in no time.

There's not too much complexity to the main idea of the game. You point your crosshair at something, you shoot it until it is dead, you move on to your objective. The ability to upgrade your weapons helps a little bit, and that's about it. Mostly, though, you are running, and you are gunning.

Now, about that upgrade system. As you progress through the game, killing some aliens can sometimes provide you with an 'upgrade part'. On their own, these things don't do much, but if you get enough of them, you can make an upgrade to one of your weapons in one of three ways. For example, get about five of them and you can add a reloading speed-up and an extended ammo clip to your pistol. Get thirty and you can do things from extending shotgun ammo to increasing accuracy in some weapons to adding a secondary fire to others. It allows you to make your weapons a little more to your liking, though it's somewhat limited in what your options are.

The presentation of the game is probably what sets it apart the most from other shooters of the kind. Instead of emphasizing heavy action (which it does contain, don't get me wrong), Shadowgrounds tries to create a creepy environment. Many areas of the base are shrouded in darkness, and shadows lurk behind every corner ready to pounce.

Luckily, Tyler has been equipped with a rechargeable flashlight that can shine light at the shadows. Often it'll be the only source of light you have as you try to navigate the cold hallways, and seeing things dart out of the way of the light as you try to get a glimpse of what is ahead adds a little something called atmosphere. It's good, especially when you're surrounded by little red dots on your radar and you notice the battery starting to run a little low...

What this also helps do is cover up the not-so-stellar graphics. They're okay, and made even better because of the shadow effects made by the flashlight and the general darkness around you, but the problem arises in cutscenes, when you actually see everything up close. They tend to lack a general polish to them, which is a little jarring to the atmosphere the game has created.

In the end, there really isn't a lot to this game. You run around in the darkness, you shoot things, rinse and repeat. Adding upgrades allows limited customization, and the atmosphere provides a nice creepy atmosphere in the darkness, but you run and gun. What's in the game is done well, but it falls short in the long run.