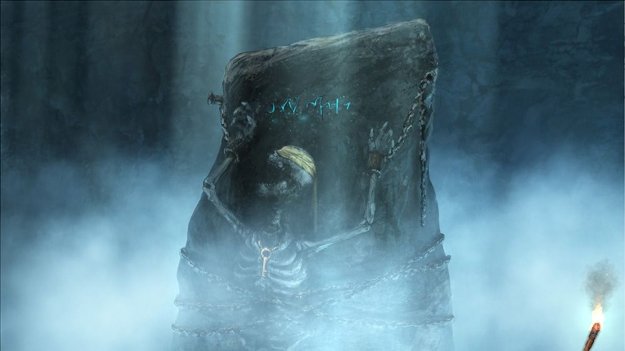 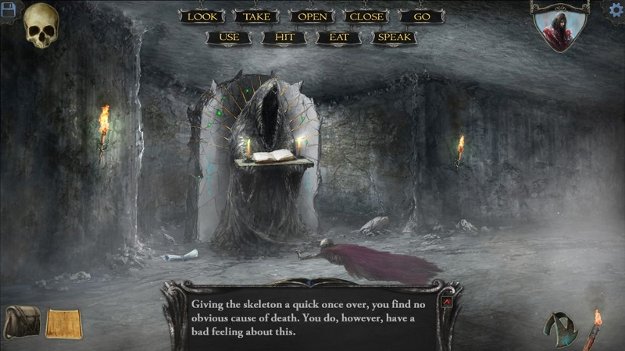 Shadowgate is the castle that just keeps on giving. Originally released way back in 1987 when I was barely old enough to pick up a controller to play the darn thing, it's back and just as bad@$$ as it was with a brand new remake.  With that brand new coat of paint comes some revisions and features that make it a little better in some ways while retaining some of the older ways of the original, both good and bad.

One of the things that you notice immediately about this remake is the beautifully rendered artwork.  The scenes are gorgeous and I mean gorgeous.  The caverns are dark and gloomy.  The cobwebs look sticky and gross and I wanted to cringe away from the screen and go grab my duster when I looked at some of them. It was great and wonderful to see them putting so much work into how it looked. The creatures were pretty awesome looking too, spit and slime included. Granted, it's not hard to improve upon the graphics of a game that was first released in the 1980's, but it's nice to see that the developers actually went through so much effort to do a good job of it. 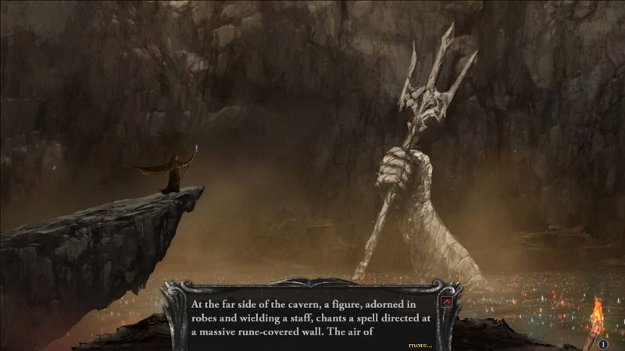 What was sad to see was that the lovely artwork had an actual negative side effect on the gameplay.  With how pretty the game was and how nice all of the artwork was, everything looked almost like a smooth oil painting. That meant that when there was something in the environment that I needed to interact with, I had a very hard time noticing it immediately.  I had to really search each of the rooms to see everything that I could pick up or touch.  Granted, time doesn't progress until you actually move from room to room so you can freely click around the entire room touching everything, but it takes you out of the moment a bit to have to 'look' at everything in the room to see if it can be interacted with.

And there's also that 'look' interaction.  Shadowgate decided to go with the older interface for the game, sticking to the old style way of doing things. You have to pick up and use items in very particular ways in order to interact with them.  For example, when picking up books or scrolls, you have to 'open' them and then 'look' at them before being able to read the contents.  You can't just 'look' at them once they're in your inventory. It's pretty obvious that I want to read what's inside. Unless there's some useful information on the cover of the book (which there never is) what's the point of making me go through a two step process? As much as I love older style adventure games, I'm actually not loving the trend of keeping old interfaces and not modernizing them and making them more intuitive.  Keeping clunky interfaces tends to slow players down and makes the game take longer and makes things more frustrating than they need to be. 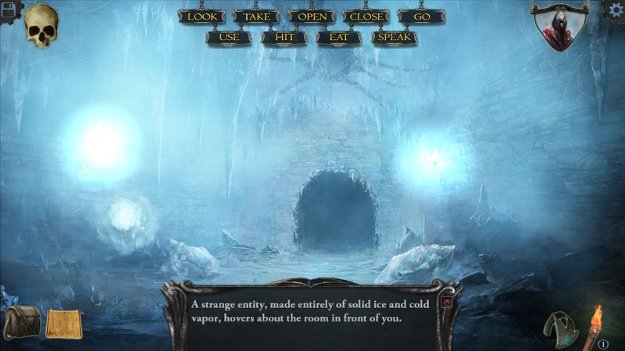 Especially considering that in the vein of older style adventure games, Shadowgate is still incredibly difficult.  That dragon in the first area toasted my butt multiple times because I didn't do things in the right order the first time I went into his room.  You have a limited amount of actions you can take once you've gone into his room. I actually had to restart the game in order to do that sequence over. As a matter of fact, this is one of those games where you can reasonably expect to have to utilize the save system frequently and may even have to restart if you've backed yourself into a corner. In the least, you can expect to see Death multiple, multiple, multiple...you get the idea.  These types of games have hard puzzles that may not make the most sense because you missed a clue or because the clue was obtuse. You may have missed one item you needed. You may not understand the puzzle because it's not intuitive.

Shadowgate is fully in the vein of these older style adventure games and it doesn't seem to care. It has multiple areas and puzzles where I found myself getting so confused I just flat out threw up my hands in frustration. You can literally find yourself wandering around for hours if you've missed something. And because of that, anything that can be done to make the players life easier would be appreciated. Like a simpler interface system.  Or an easier system for getting around the castle, which is something else the remake doesn't have which would have been very nice. It has an in game map which made it a little easier to help remember where I was and where I'd been, but if I'd been able to pull up the map and click on any room I'd already been to as a quick travel system, that would have made my life much easier. Even if the game counted those moves as time forward in the game and gave me a warning in advance. And even if limits were put on it, such as one quick travel every few minutes. That would have been so dreamy.

Nonetheless, it was still a fun experience.  The multiple difficulty levels means that if I decide I want to tango with the castle but I just can't handle having the regular experience, I can dial the difficulty down a notch.  That's an awesome feature to have and makes the game more accessible to those who want the fun without as much of the hassle. And for those who are way too cool to be hassled by the regular castle and think that it's way easy, they can give themselves a challenge by going for the harder difficulty. Something for everyone.  And with the awesome soundtrack playing in the background, so long as you can keep the volume of your own cursing down to a mutter, you're in business.

UPDATE: This is to address the Halloween update and its impact on the title:

The first thing I noticed about the Shadowgate update was that the interface buttons at the top were gone. I looked around in the settings for them for a bit then noticed the new modern wheel system that was implemented. I actually like it a lot. It means that when you go to click on objects you just move to the option you want and it makes it a lot simpler and easy to get to the option you need. No more moving your mouse up and down, no more scrolling and no more assigning buttons. And in any case, I mostly assigned buttons for the spells. Double clicking to move through doors was pretty nice as well and made moving around a little smoother. 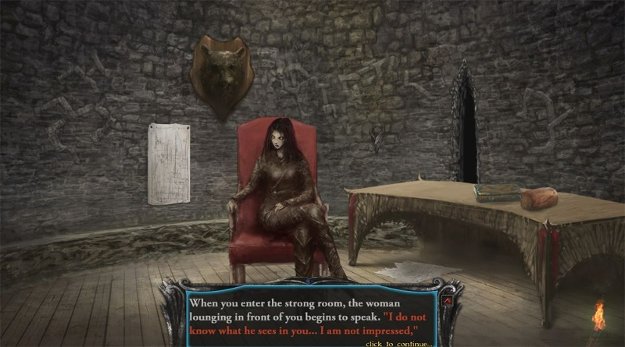 Taking away multiple clicks of the use button also makes it just a little easier to navigate which is appreciated. I also enjoyed the button that allowed you to see usuable or clickable items in the environment. You don't have to use it if you don't want to, but it's an option if you're interested. It's also very subtle and doesn't completely ruin the immersive feeling or interfere in the beautiful backgrounds of the game. The additional difficulty settings are also a nice plus for those who need an even more watered down or buffed up version of the game.  It was a great update and it's awesome to see the developers addressing some of the issues with the first release.