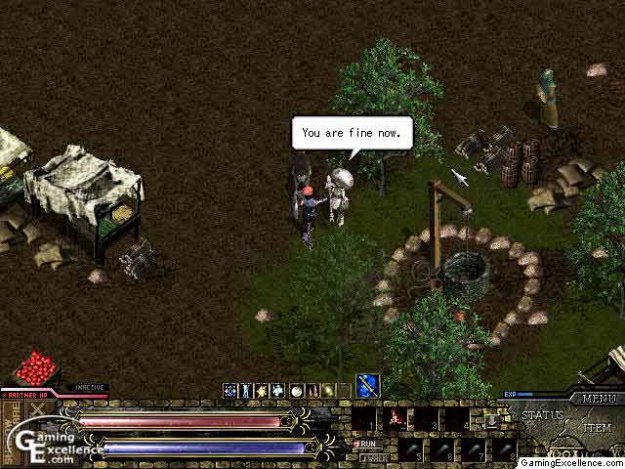 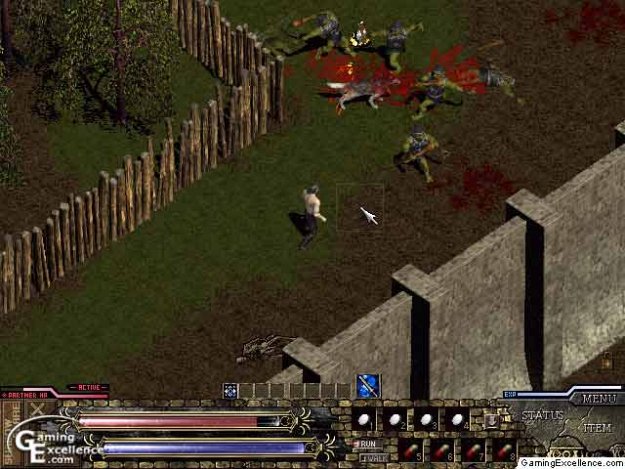 Emurasoft is in a sense a very new company, although they have been around for years producing shareware products, this is the first real test is producing a complete game. Developed by Denyusha, ShadowFlare was originally released in Japan last year and received solid praise. Now Emurasoft has brought this title to North America, and we finally get to see what all the praise is about.

This is only the beginning of what one can expect from Emurasoft, the complete version of ShadowFlare consists of four episodes. You begin by selecting a character, both a male and female mercenary are available. Your mission is to complete assignments and tasks provided for you by the other humans, working for gold and slowly gaining experience as you travel the through the violent lands. Only as the story progresses will you learn of the devastation that ravaged the planet, and who is responsible for this destruction. Although the single player mode will be the primary focus for most players, ShadowFlare will also feature a multiplayer option for up to four players at a single time, allowing these players to progress and defeat enemies as a combined effort. Many players will find this aspect very appealing, especially those who primarily focus on multiplayer gaming.

The menu system presented in ShadowFlare is extremely basic, game options cannot be customized in any way. The in-game user interface very initiative, menu items are easily accessed and character heath and magical power is clearly displayed. Unfortunately, this limited customization may prove troublesome for some as graphical settings, player controls as well as a variety of other options are unavailable for modification.

One aspect players may find lacking in ShadowFlare is the graphical engine, especially compared to those of modern standards. The title is limited to a resolution of 640x480, however one must remember that the title was originally released around a year ago. One could compare the graphics engine to that Blizzard's Diablo II. Colors are bland and dark; objects are of the same quality. Battle effects on the other hand can become quite intriguing, magical spells cast bolts of lightning while swords clash together and corpses lie all around. At its initial time of release last year, ShadowFlare would have been around an average standard for this in this type of title, however compared to many modern RPG's the graphics engine is showing it's age.

ShadowFlare is unique in a variety of ways, like most RPG's the primary goal is to advance your character and progress through the developing storyline. However, ShadowFlare allows players to select an animal companion to assist in this struggle. The companion can complete a variety of tasks, attacking enemy forces, collecting items and objects, and opening doors among other things.

Fast paced blood splattering action is what made the Diablo series so popular, and ShadowFlare is composed of this same formula, however players unfamiliar with the genre may become overwhelmed as the title has an extremely steep learning curve. As the title advances and the player ranking becomes greater, an area of specialization becomes available for future character development. This advancement will follow you throughout the remaining missions and future episodes, with the specializations consisting of a warrior, wizard, or hunter, each with specific traits and advantages.

Weaponry is always a large aspect of any action based role-playing game, and ShadowFlare is no exception. A wide variety of weapons and magical spells are made available as the game progresses, swords, shields, daggers, and twenty-two unique magical effects for use against your foes. ShadowFlare has sure got its bases covered in this department, and that is an understatement to say the least.

Players have the option to save the game at any time, however only the progress and player statistics are saved which is of great disappointment. Players will be forced to defeat all enemies again should you be near the end of a fortress and save the title, all progress in completing that will be lost. This is unfortunate as some of these missions can become extremely difficult and time-consuming operations to complete, and not everyone has the time available to spend completing these in a single seating.

Any fan of the role-playing genre will want to keep an eye on ShadowFlare as it is in the final stages of conversion from the Japanese edition. At the bargain price of $14.99 per episode, Emurasoft may have a good selling title on their hands. The product will be downloadable from the web, and this venture may just prove successful for the publisher; only time will tell.