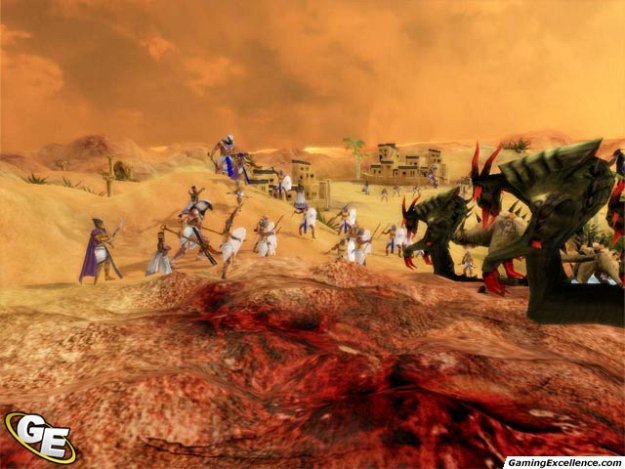 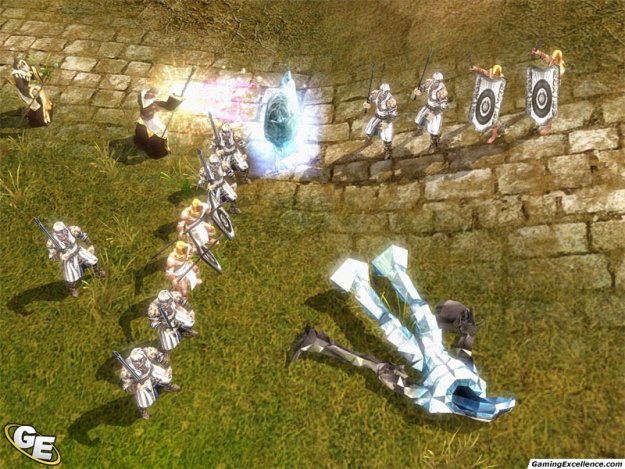 Are you bored? Want to play an RTS? Are you reaching for Seven Kingdoms: Conquest? Stop. There are too many problems with the game to list in this opening paragraph, but rest assured, you're going to want to skip this one.

The Seven Kingdoms series was an intriguing mix of turn-based and real-time gameplay, mixing in diplomacy, base-building, typical RTS combat, prayer, leadership, and a slew of other interesting features that were different from anything else in the RTS market. So, you're interested in Conquest, based on this description? Don't be. This games takes away everything that made the series popular, everything that make RTS games fun and, well, everything enjoyable. The result is not pretty.

In Conquest, you take the side of either demons or humans in a real-time battle to conquer nearby villages, build units, upgrade units, and send them to clash against your enemies'. Each side has some variance within themselves: the humans, for example, have races like the Babylonians and Egyptians, among others. The Demons are a little bit more original with their choices, presenting the option between a variety of demons like Plague, Beast, or Shadow. It sounds like there's a lot of variety, but the choices are really just cosmetic. There's absolutely no difference between the human races, and the same goes for the demon types. There's also the concept of ages, like Medieval, Roman and so forth, but all that does is make your units a little different without actually introducing anything new. Bowmen, for example, eventually become crossbowmen, while spearmen become hoplites. Hooray.

There is so much wrong with this title that I'm finding it hard to figure out where to start, exactly. The buggy result? The incredibly slow pace? Bad design, repetitive battles, lack of a campaign? There's just so much to cover. But let's start with what most people will when they start the game, the tutorial, perhaps because it's just so indicative of what's to come.

The human tutorial is impossible to finish, dull, and a general waste of time. Yes, impossible to finish, due to a gate that refuses to open and therefore prevents you from progressing. This is not a good start. So, let's start a campaign. The 'campaign' in this case is just a series of skirmishes that would be identical to normal skirmishes, except that you can't set your options and you get a small little voice-over description. The description, however, occasionally has nothing to do with the campaign at all and despite all the talk about humans battling off demons, it's usually just humans against their common man, which never really makes any sense.

Wondering about the gameplay? There is evidence of Conquest trying to do something different, but it's more likely a hopeful remnant of the original Seven Kingdoms series. I'll explain: each side in a battle begins with a single city, and within the area of that city, you're able to build a variety of buildings. However, you are limited to the number of buildings you can build around each city so you must strategize between prerequisites and unit types. When you need more space, you can capture other villages on the map to build structures around those as well.

Capturing other villages takes two forms: either you attack with a number of forces, overwhelm the defenders, and rain hell upon the village until it submits to your will, or you take a more diplomatic approach. Sending diplomats allows you to propose an alliance with the village, and it sounds like an interesting idea. Unfortunately, much like everything in the game, it just doesn't work. Using the diplomatic approach has two costs: first the diplomats (or succubi, if you're playing as the demons) cost resources to train. Second, it takes resources to actually propose an alliance, or to demonically sway the people to your side. This would be fine, but with the amount of resources it costs and the fact that alliance proposals aren't guaranteed to work thereby wasting resources, the entire process feels like a waste of time. It's just easier to build a lot of units and smash down the walls.

The pace of the game can be best described as 'molasses-like,' if molasses enjoyed stopping its rapid movement every now and then for a quick sip of tea. To give an example of how slowly things move, take the gold mine, the basis of the humans' resource generation. Each gold mine gives you a whopping ten gold every minute. The cheapest unit in the game, the worthless spearman, costs this much to make, and is generally useless unless grouped in packs that are referred to as 'hordes.' Considering that you can only build two mines around a city, this means a game that consists more of watching the resource counters slowly tick their way upwards than actually telling units to do things.

The demons' side is generally better in this regard. The humans have gold as a resource to build things and food to keep their armies fed. This means that the construction of everything requires only gold, and food is merely an afterthought. Demons, however, get to use stone to build structures and blood to summon units, which means that their resources are evenly balanced, and not hamstrung like the human side. The fact that both sides have the same limitations (two farms/blood totems and mines/stone shrines per city) means that the demon side is ridiculously better, and generally better in every regard.

The other facets aren't any better. For the multiplayer mode, there's no match-finding service, so to actually play any game you need to connect to the IP of the host. There's no other way to match up. That's just disappointing. While the music is alright, the sound effects are not, and the graphics aren't nice to look at. Additionally, I've noticed that while the instruction manual displays a picture of the option screen with a resolution option of 1600 x 1200, the resolutions in the game do not actually go this high. Let's not forget the buggy gameplay that'll find you on your desktop more often than not.

Seven Kingdoms: Conquest fails to do anything right. Balance problems, technical issues, pace, story, graphics…I can go on. It's not worth playing. If you want a good Seven Kingdoms experience, play the original game. It may look dated, but it's better than this sequel. Those looking for a decent RTS experience, stay far away from this one.