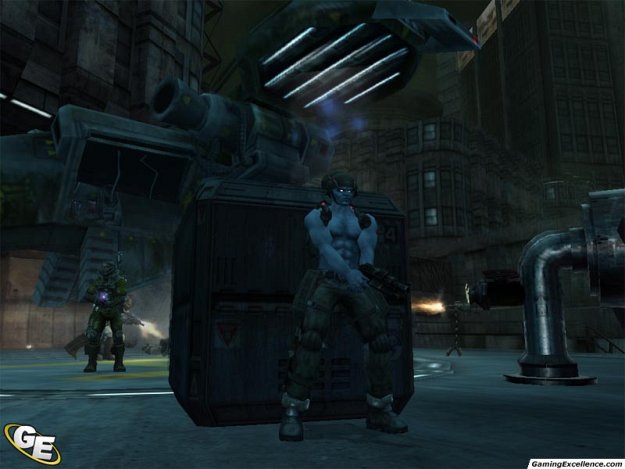 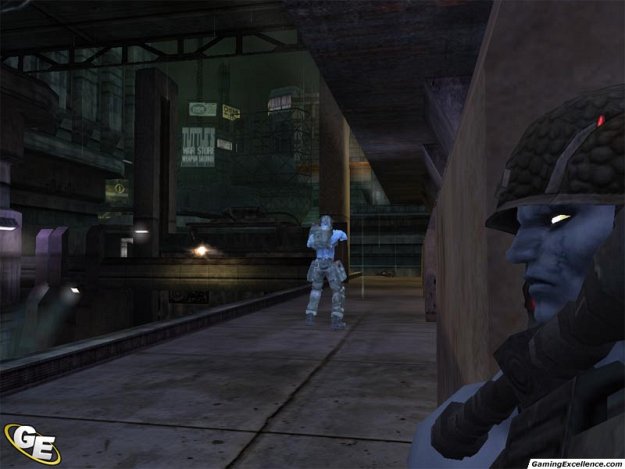 Since the release of the Xbox 360 in November, most gamers have been looking forward to the next-generation of gaming. With the advent of such new systems as the PS3 and WII, current-generation games seem to be forgotten and feeling the vicious side effect of discount-rack fare. While this is a natural occurrence, titles being released on current-gen consoles, some of them hidden gems, are suffering from lack of advertising, buzz and proper product placement. Rogue Trooper is one such game.

Developed by Eidos, Rogue Trooper throws the gamer into the middle of a full fledged war that is being fought between the Norts and the Southers, who are fighting for control of the planet Nu Earth. Due to years of fighting, Nu Earth has transformed into a wasteland, with the atmosphere deadly to inhale, and the surface devoid of life due to repeated chemical attacks. The Southers developed a weapon that could have turned the tide of the war. They grew a regiment of soldiers in vats and bio-engineered them to be the perfect killing machines, capable of breathing normally in the toxic atmosphere.

This third person shooter puts you into the shoes of one of the genetically enhanced GIs, as part of a four man team, each member with their own special ability. When a GI is mortally wounded, the mind and soul of a GI can be downloaded onto a silicone chip to prevent the loss of knowledge, abilities and combat experience. Throughout the course of the first mission, you will be given the abilities of your teammates, Gunnar, Helm and Bagman, as they are integrated into your combat gear. For example, when you are finally given the ability to hack computers, you need to place your helmet down on the control panel.

The story is fairly straight forward; the Southers have been betrayed and the GI regiment is nearly completely wiped out. It's up to you to figure who is behind it. The player is led on the hunt for the traitor while battling through Nort forces, mechanized infantry and air ships (also known as Hoppa). Throughout the game you can collect wreckage that can be used to create new items. The wreckage can be taken off of the environmental suits of dead infantry, the wreck of mechs, and there are bonus caches to be found in each level. The more wreckage you have, the better the items you can create. Typically you will spend most of your 'currency' building ammo clips for your rifle and med packs. You will also be able to create new weapons that are built into your rifle. Essentially your weapon is a transformer, capable of transforming into a sniper rifle, a rocket launcher and even a shotgun.

The first level of the game is pretty much a tutorial that takes you through most of the abilities and aspects that make the game fun to play. It's not untill the second level however, that you become exposed to the stealth aspect of the gameplay. As you progress through the game, one of the upgrades that becomes available is the ability to silence your assault rifle. This is a little ridiculous, especially once you see the size of the silencer. There are two ways of eliminating an enemy quickly and silently. The first is to use the sniper rifle in conjunction with the silencer. Because the game takes place in a science fiction world, the rifle will make hardly any noise at all. The second method is to perform a stealth kill, which involves the player sneaking up on an enemy from behind and then performing a single killing stroke. This move is best performed in crouch mode, as the character will hardly make a single noise as he is more conscious of how loud his footsteps are. This move can be performed on not only enemy infantry, but also on enemy mech infantry.

Through the game you not only play in third person mode, but also controlling various transports. In one of the mission you need to defend an allied train so that it can reach its destination intact with all of your troops aboard. The train is attacked by both ground forces and by air units, so a unique strategy of using both the anti-air turret and the anti-infantry turret is required. In another mission you are placed in the gunner position of one the enemy air units after you have 'liberated' it. The mission requires a lot of fine shooting as not only are the enemy air units moving and shooting, but your ship is moving as well.

Like most games there are always a few points that make the game unique and stand out from the rest. One such trait is that the player is informed when he or she has a head shot in his scopes by simply showing a small icon by the crosshairs. Rogue Trooper incorporates this feature nicely by adding on another similar feature that informs the player when he or she has an enemy unit's air supply hose in their crosshairs. This method of killing an enemy is extremely pleasing to all of you blood lusting gamers out there, as it causes the enemy to run around screaming before his air tanks exploded causing a lot of area damage.

EIf Rogue Trooper had been released before the current crop of next-gen consoles, not many people would have argued with how nice the game looks. While it does have a lower resolution levels then current Xbox 360 games, it is still probably one of the better looking current-gen titles out there, and the PC graphics are decent. The menu system for the in-game and main menu is exceptionally well done and is easy to use. The salvage screens takes a little time to get used to if you don't reference the manual, but is not a really big issue if you listen to the tutorial. Character models are nicely done but the GIs could have used a little bit more attention.

The voiceovers were one area that I found to be a little lacking in quality. The main character has the same feel and lack of emotion as Master Chief from Halo, very under control and calm even in the face of certain death. This added a nice touch to the game. The in-game music fits well with the fast-paced gameplay and made for an intense gaming experience.

Overall Rogue Trooper is an excellent, fast paced shooter but because it launched so late in the life of the current-gen consoles, it is more likely that gamers will pick up a new 360 game or save for future PS3/Wii fare. However, if you are looking for something different or are still satisfied with your current console or PC, then Rogue Trooper is definitely worth picking up.