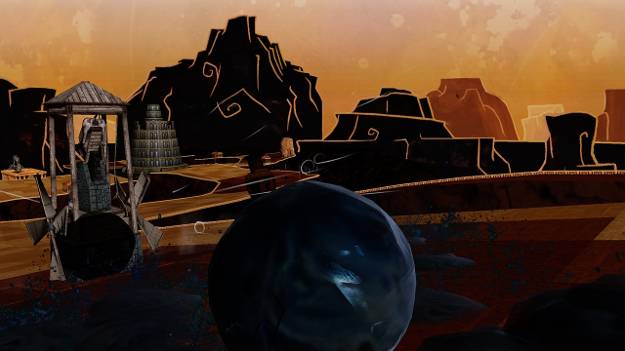 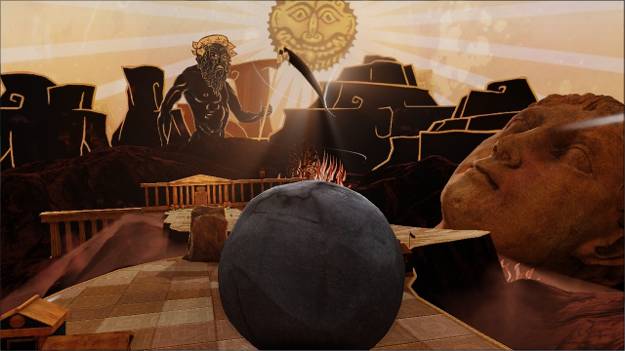 Rock of Ages is an incredibly weird game to describe to people. It's one of those games that you try to talk to your friends about but only find them giving you funny looks that seem to say "This guy has been hitting the bottle again." For a game as simple to pick up and play as this one it's so bizarre that most attempts to describe it end up falling short.

When you start playing the game you are introduced to the first element – controlling a rock as it races along a track. This track is never a straight line, consisting of twists and turns with a variety of obstacles in your way that range from buildings to be smashed, unbreakable rocks and obstacles placed by your opponent. As you hit these various obstacles your rock breaks apart, losing mass as it does, which causes a problem as you reach the end of the track.

Welcome to the tower defense portion of the game and this really throws a curveball into the mix. To slow down the enemy you must place wooden towers, catapults can damage the rock and slow it down while animals can push around boulders to hopefully knock them off the path entirely. Upgrades to these basic structures as well as brand new obstacles, like explosive barrels which wreck havoc upon any boulders that touch them, unlock over time and add to the strategy.

But of course while you're doing this your opponent is doing the same thing. Since it's the computer it's also doing things far smarter than you could hope to without a lot of practice plus it tends to dodge your obstacles with ease so you'll need to be very clever with where you place these to have any real impact on the hostile rock. Frustration ensues as you try to be oh so clever to have any effect at all but your opponent blows through your track like it's not even an issue. This difficulty level is definitely one of the main problems with this otherwise incredibly enjoyable title. Rather than simply growing at a steady pace it rapidly shoots up and down depending on the level you're playing and how easily the computer can abuse shortcuts.

There are other modes for you to play around with like a skeeball mode which is exactly what it sounds like (use your rock like a skeeball naturally) and a time attack. There are also online and local competitive modes to add some replay which is needed as the game isn't especially long, taking about four hours or so. We didn't have much time with the online mode but the local mode is a blast to play with a few friends, passing the controllers around like it's the old days of playing king of the hill with your buddies.

One of the most distinguishing features to Rock of Ages is quite obviously the graphics. Each of the section of the game has its own art style, whether it be in the style of the Greek vase painting or renaissance painting, and they're all impressive to behold. The sprites for characters are 2D models while the obstacles and rocks are 3D which adds an even more surreal bend to the whole experience. Frankly even if you don't enjoy the game itself for some reason the art style itself is good enough to almost be worth the price of admission.

A lot of people out there calling themselves gamers like to cry about there not being enough creativity in the land of game development. Well Ace Team sets out to prove them wrong. They may have only released two games, Rock of Ages and Zeno Clash, but both of these titles try to do bold things with games both in the art style and interesting gameplay developments. In the least give the demo for this one a whirl. Hopefully it'll grown on you as quickly as it grew on us!